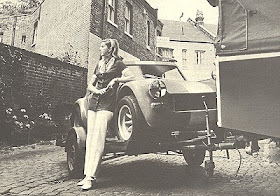 Gabriel with her Modsports MG

Gabriel Konig (not Gabrielle) was a much-travelled Irish driver who competed off and on from 1962. She was most successful in MG Midgets and a Chevrolet Camaro, winning 18 races in different series, at club and National level mostly.

Living at her mother’s Beaulieu House near Drogheda, she learned to drive very young; at ten, she was able to drive a tractor. She was a regular spectator at motor races with her mother, attending events at Dundrod and Curragh. She earned her driving license at seventeen, then four years later, began racing. By this time, she was married to Mark Konig, another racing driver and car builder, and living in London. Her first racing car was a Lotus Elite. A Lotus Elan soon followed. She rarely raced in her home country, but was a regular face on the scene in England, and also in continental Europe. In 1964, she was twelfth in the Tourist Trophy at Goodwood, in the Elan. The following year, she shared the Elan with Mark for the Nürburgring 1000km, driving for the WJ Moss team. They did not finish due to gearbox problems. That year, 1965, she entered the Autosport Championship in the Elan. Later in the year, she raced a much more powerful Ferrari 250 GTO at Silverstone, but crashed out.

In 1966, she took her first race win, driving a Hillman Imp. This was a National-level race at Mallory Park. This year, she returned to smaller cars, and was rewarded with results that went with her level of experience.

After a quiet 1967, during which she may have raced an Austin-Healey Sebring Sprite, she was taken on by John Brittan’s team in 1968. The car she was given was an MG Midget, and she raced in the Modsports series. This style of competition suited her well, and she ended the year with fifteen class wins. One of her best overall results was fourth at Mallory Park, with a win in the 1150cc class. The year before, she had been a member of the Ring Free Oil “Motor Maids” team in the USA, and had travelled to America for the Daytona and Sebring sportscar races. However, she seems to have been a reserve driver, and did not get to race. Her winning year in 1968 must have gone some way to making up for that.

Her first international win came in 1969. She was first at Fassberg in Germany, driving an Austin-Healey Sprite. The Brittan MG was still competitive, and she travelled to Italy to race in the Mugello Grand Prix, with Garo Nigogosian. They were 31st, fifth in class, from 65 finishers. Also in Italy, Gabriel and Mark did the Targa Florio together, in the Nomad MkII. This car had been designed and built by Mark, and was powered by a BRM F1 engine. Sadly, an accident caused by a puncture put them out of the event on their third lap.

1970 was another year affected by accidents. Gabriel did not do much racing at all this year, as she suffered broken vertebrae in an accident in Brazil. She had been driving in a Formula Ford race at Sao Paulo, and crashed when the steering on her car failed. She was not permanently injured, but had to take almost a year out to recover.

Early in the following year, she returned to UK club racing as part of the “Carmen Curls”, an all-female team who raced a Royale in Formula F100. They were sponsored by Carmen hairstyling products, and Tina Lanfranchi was the team manager. Formula F100 was a poorly-supported series which folded at the end of the year and the Carmen Curls disappeared with it.

1972 saw her career go international again, with her first attempt at the Spa 24 Hours. She drove a Chevrolet Camaro with Marie-Claude Beaumont, a driver with considerable experience of both Chevrolet power and endurance racing. Sadly, they did not finish, due to a loss of oil pressure.

Despite her experience, Gabriel liked the car, and bought it to race for the 1972 season. She competed in the Irish Group 2 championship, now that motor racing had grown in her home country. At the end of 1972, she had it shipped to Guyana, where she would live and race for the next twenty years.

One of her first sporting appointments was joining the BOAC Speedbird team, which took British-based racers to the Caribbean, in partnership with the Guyana Motor Racing Club. Gordon Spice was one of her team-mates. She won at least two races in the Camaro at the South Dakota track in Guyana, and was second at Bushy Park in Barbados.

Among the cars that she raced during her Caribbean years was a Byldenstein Vauxhall Viva, built as a sister car to Gerry Marshall’s famous “Old Nail”. In this car, she won at least one race at Waller Field in Trinidad, in 1976.

During her time in Guyana, she raced again in Barbados. She was part of the group of enthusiasts initially responsible for bringing UK-based drivers to Barbados for its annual rally, something which continues to this day.

Gabriel was one of the founder members of the British Women Racing Drivers’ Club, one of the first group of drivers to be invited to join. In 1968 and 1972, she received awards from the BWRDC for being the highest-achieving female driver in the British Isles.

She also rallied in the UK more recently, doing some classic events in a Ford Escort, among other cars, including a Hillman Imp and an Austin A40. In 1997, she entered the Tour Auto in France, driving a Vauxhall GT. Latterly, she owned her own motor museum at Beaulieu, based around a collection of her own racing cars.