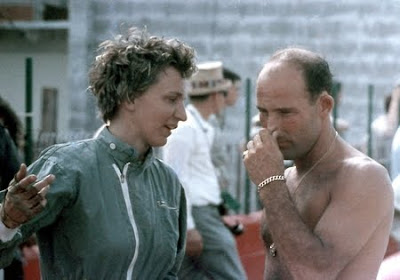 Denise started out as a motorsports journalist, before embarking on a long and varied driving career in the late 1950s. She took part in many international sports car races and saloon events, picking up a number of class wins. Unusually for an American, she drove in rallies in Europe and the Americas, as well as circuit races.

She was born in 1927, and began her motorsport career through her writing. As a sports reporter, she wrote about chiefly motorsport and skiing for a number of increasingly-important American papers, and used this as a springboard for her own participation.

Her first competition car was an MG, which was upgraded to a Jaguar XK140MC a year later. She used this car in local circuit events during the 1955 and 1956 seasons. Part-way through 1956, she exchanged it for a Porsche 550 RS, in which she won a ladies’ race at Nassau Speed Week. She also tried to qualify in an Osca MT4-2AD, but only managed sixth.

Back in the Porsche in 1957, she won a Ladies’ race at Watkins Glen and came fifth in a mixed SCCA National at Montgomery. On her return to the Bahamas, she was ninth in the Nassau TT race, against a strong field, which included Masten Gregory, Stirling Moss and Olivier Gendebien. She was also fourth in the Governor’s Trophy, eighth in the Memorial Trophy and first in all three Ladies’ races.

She continued to enter SCCA events at home throughout 1958, still driving the Porsche. Her exact placings are hard to come by, but it is known that she was eighth in a National race at Lime Rock in June, entered by Briggs Cunningham. This year, she seems to have made her first forays into European racing: she was seventh the Rheinland-Pfalz Preis for 1300cc sportscars at the Nürburgring, driving an Alfa Romeo Giulietta. At the end of the season, in the Bahamas, she shared a Lotus 11 Climax with Marion Lowe and was ninth in the Nassau Trophy.

Still supported by Briggs Cunningham, Denise was eighth and fifth in two SCCA races at Montgomery in 1959. She was fifth in the Porsche and eighth in an Osca 750. In a move up the motorsport ladder, she shared a similar Osca with Isabelle Haskell and Alejandro de Tomaso in the Sebring Twelve Hours. They were 18th overall, second in class. In the familiar Porsche, she made the step up to the USAC Road Racing Championship at Lime Rock, and was twelfth. At Nassau, she drove the Osca again and was not quite as competitive as in previous years: 17th in the Governor’s Trophy, 27th in the Nassau Trophy and thirteenth in a Governor’s Trophy preliminary.

It was this year that she got her first taste of rallying, having been selected for the Triumph team to run in its three-car effort in the Cross Canada Rally.

There were no more USAC races for Denise in 1960, but she continued her rise with another run at Sebring. She and Marianne Rollo drove the Osca in the first part of the race, until a bearing jammed after an oil leak.

In 1961, she drove a Ferrari 250 GT SWB with Allen Eager. They won their class at Sebring and were tenth overall. The Nürburgring 1000Km brought a DNF, but when Denise returned to the States with the car, she won two National races in it. Denise later claimed that this car, which she owned herself, was one of her favourites; she drove it on the road and to and from race meetings, as well as on the track.

The Ferrari was traded for an Osca S1000 the following year. Denise and Allen Eager went out of the Sebring Twelve Hours very early after an accident, starting the season badly. Denise, driving solo, is listed as a driver in both of the Bridgehampton events, driving the Osca and an Austin Healey Sprite respectively. She crashed out in the Osca.

In 1963, undeterred by a bad previous season, she did a number of US and European races with Christabel Carlisle, in the latter’s MGB. Their fortunes were mixed: they went out early on yet again at Sebring, but did manage a third in class at Brands Hatch. It was about now that Denise really got into, rallying. She drove and navigated in the UK and France, usually in a Mini. It was in the Mini that she navigated Terry Hunter to the end of the Tour de France. In the RAC Rally, she drove a Ford Falcon with Rosemary Seers, but got stuck in a ditch. The two also retired from the Alpine Rally, for unknown reasons. With a different Ford, a Cortina, she appears to have finished the Spa-Sofia-Liege marathon with Anne Hall.

She co-drove for Anne Hall in 1964. Their car for the Acropolis as a Rover 3L. On the Monte Carlo Rally, they drove a Ford Falcon, but their car details for the Spa-Sofia-Liege event have been lost.

After 1964, Denise fades from the competition scene somewhat, and her journalistic career takes over. She was one of the founders of what became the car magazine, Auto Week, in the States, and wrote many articles, columns and books about cars and driving. She continued to publish until shortly before her death, in May 2015.