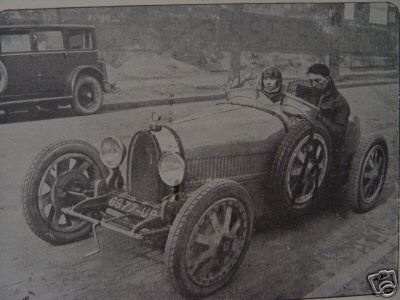 Charlotte Versigny competed in races and rallies in France, in the late 1920s. She often drove a Talbot or a Bugatti.

Her beginnings in motorsport are not very clear, like most of her private life and biography. She was involved in motoring generally, and ran a large driving school in Paris.

Her first major motorsport event seems to have been the Monte Carlo Rally in 1927. She drove a 1460cc Fiat, and was 26th overall, second in the Coupe des Dames rankings, behind Mildred Bruce. This was not her first event, however; she is listed in an article in L’Aérophile as having won the Ladies’ Automobile section of a “Rallye-Ballon”, combining motor races and a hot air balloon race. Her car was a 15hp Oakland. This American vehicle was her first competition car, which she initially entered into Concours, from 1926 onwards.

By 1927, she was racing her Talbot 70 in France. Her first big race was the Grand Prix de la Baule, in which she was fourteenth, just behind Lucy O’Reilly Schell in her Bugatti. She was sixth in class.

That August, she was one of twelve drivers, including the eventual winner Elisabeth Junek, who took part in a “Championnat Féminin” held at Montlhéry (not the Journée Féminine del’Automobile). The race was over 60km, and Charlotte was second. Another women-only event, the Paris-La Baule Rally, saw Charlotte and her Talbot in action again in September. In mixed competition, she was fifth in the Le Touquet-Paris-Plage, having started at Pau, the same start point she used for the Boulogne-Le Touquet Rally.

The Talbot came good at the start of 1928. Charlotte won the Coupe des Dames in the Monte Carlo Rally, and was third overall, one of the best-ever results for a female driver, to this day. This was followed by a run in the Paris-Nice Trial, in the 2000cc class. Her car was a Bugatti, and she won the Dauphinois Automobile Club trophy, plus another award for being the only woman driver to finish without penalties, and a fastest time in a speed trial at Grenoble.

The Bugatti was her chosen car for that year’s  Journée Féminine de l’Automobile. She qualified for the final race, and won the speed trial for open cars. This was her second entry into this particular event, although she had to pull out in 1927.

She had first driven the Bugatti towards the end of 1927, in hillclimbs. Another all-female event was held at Saint-Germain in July, as part of the Bol d’Or, and Charlotte was on hand for the Formula Libre race.
She also drove the car in the Coupe de Bourgogne that year, against Jannine Jennky.

The Oakland had not been forgotten this year, either. Charlotte drove it in Concours d’Elegance events, and in the hillclimb attached to the “Rallye-Ballon”.

Charlotte was an enthusiastic and skilled addition to the already-vibrant, Paris-based ladies’ motor racing scene. Some sources have her down as entering the Paris-St. Raphaël Rally, and while this is certainly possible, I have been unable to find any results. She disappears from the entry lists after 1928, and the Paris-St. Raphaël began in 1929.

She is credited as the one of the inspirations behind Hellé-Nice’s decision to become a professional racing driver.