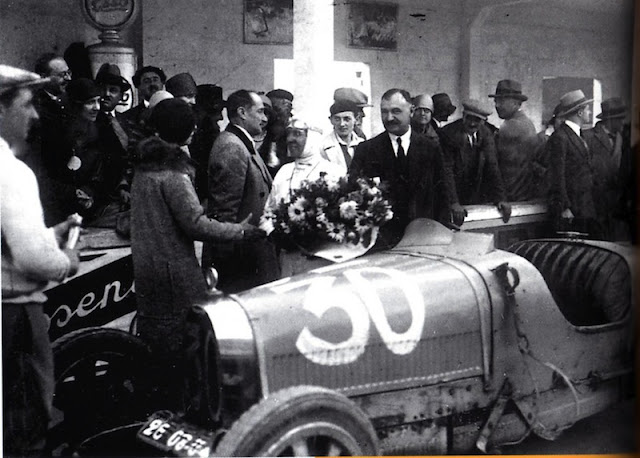 Marie-Léonie Derancourt, who used the name “Albertine”, was a popular but not particularly successful French racer of the late 1920s and early 1930s.

In 1927, she entered the Grand Prix de la Marne in a Salmson, but did not finish. Earlier, she had also entered the Formula Libre race at the Grand Prix de l’ACF, and was fourth, and last classified finisher. This was her first entry in a Grand Prix, and although it was not a headline event, she was up against the likes of George Eyston and Louis Chiron. That summer, she was quite a busy racer. Her best confirmed result was a third place, from eight finishers, in a ladies’ handicap at Montlhéry, in August. She was driving the Salmson, and was only beaten by Elisabeth Junek and Charlotte Versigny.

Away from the Grand Prix scene, she had more success in the ladies’ races that became popular in Paris in the late 1920s. Driving her Salmson, she was one of the participants in the original Journée Féminine de l’Automobile in 1927. A little later, she won her class in the Paris-La Baule women’s rally, picking up the prize for 1100cc racing cars.

She later owned one of Elisabeth Junek's old Bugattis. In this car, she was eighth in a heat for the 1928 Bugatti Grand Prix. It was a Bugatti that she drove in the Paris-La Baule event, but it is unclear whether it was the same one. She was twelfth overall, and won the class for 2000cc sportscars.

In 1929, she drove a Bugatti T35, almost certainly the same car, in the Grand Prix de la Marne. She was fifth in the 2000cc class. Early in the season, she drove the Bugatti in the same class of the Circuit de l’Aisne, and the Bourgogne Grand Prix. These were all mixed events. In June, she is listed as a finisher in the Lyon Grand Prix, held at Quincieux, and was third in the 2000cc supercharged class.

The latest motorsport activity that can be found for Madame Derancourt is in 1930. She drove her two-litre Bugatti in the Moroccan Automobile Club’s Grand Prix, held in French-ruled Morocco, in April. Among her rivals was Hellé-Nice.

She is sometimes referred to as “Albertine”, probably after her son, Albert, who drove a Salmson and a Bugatti as a daredevil act when he was a child. He was only five years old when he started, and he was billed as the youngest driver in the world. He was awarded an official driving license a year later, in 1921, and set a speed record at Montlhéry in 1922. His own driving career overlapped with his mother’s considerably. They may have contested the Paris-La Baule Rally together at some point; many sources claim that Albert won this event when he was eight, although it was not run until 1925, and was a women’s rally. At the Marne Grand Prix in 1927, in which Marie-Léonie raced, Albert did a demonstration run.

Marie-Léonie disappears from the public eye after 1930. Her son remained in the limelight for a while longer. It is unclear what she did for the rest of her life, or when she died.