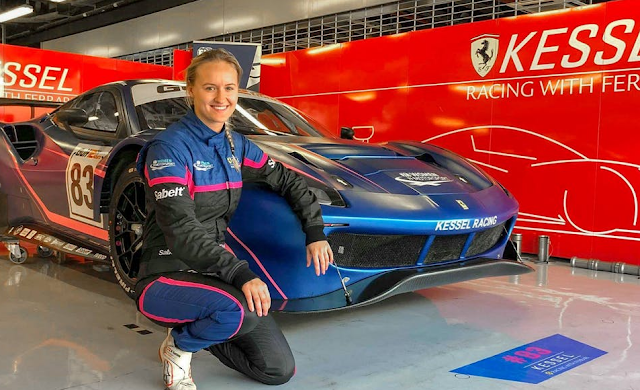 Michelle Gatting is a Danish driver who has won races in single-seaters and saloons. In 2019, she entered Le Mans for the first time.

She began racing in 2011, after winning two Danish karting titles. A Formula Ford was her first senior racing car and she wasted no time in getting on the pace, finishing fourth in her first race. During the second half of the season, she was a constant presence on the podium and won her first race at Sturup. She was third in the championship.

In 2012, she moved to the VW Scirocco-R Cup in Germany, supported by the FIA Women in Motorsport commission. This was the first of two seasons in the series. She was eleventh in her first year, and fourth in the Junior standings after one class win. She also drove a Scirocco in the Merdeka Endurance Race in Malaysia, but did not finish.

Her second season was much more successful and she became one of the championship’s quickest drivers, managing four podium finishes. These were a third and three seconds early in the season. She was fifth overall.

In 2014, she moved into sportscar racing, and raced in the Porsche Carrera Cup in Germany. Her best result was 15th, in Oschersleben. Towards the end of the season, she did two rounds of the International GT Open. She was eleventh in one race at Spa in an Audi R8 LMS Ultra.

She did not race competitively in 2015, but she did test a Thundersports car, with a view to entering the championship in 2016. Her debut Thundersports season in 2016 was a good one; she scored one win, at Bellahoj, as well as two second places, finishing eighth in the championship. Her car was a Dodge Challenger.

2017 was another strong season, with seven podium finishes and seventh in the Thundersports championship.

In 2018, she raced a BMW in Supertourisme in Denmark, continuing her good run of form. She was third in the championship with three wins, at Rudsborg and Padskogen.

Later in the season, she joined the Kessel team for the Gulf 12 Hours, having proven her mettle in big-engined, powerful cars. Kessel was running an all-female team. They were second in class and sixth overall. This led to an offer of a drive in Europe with Kessel, including the Le Mans 24 Hours. The team, consisting of Michelle, Rahel Frey and Manuela Gostner, is supported by the FIA Women in Motorsport Commission.

The FIA WiM also supported Michelle in joining another all-female team for the Sepang round of the Asian Le Mans Series, in a Ligier LMP3 car. Her team-mates were Margot Laffite and Katherine Legge. They were running as part of Keiko Ihara’s R24 team, which had two female-crewed cars in the race. Michelle’s team was eighth in the LMP3 class.

Michelle was initially named as a candidate for the inaugural W Series women’s Formula 3 championship, but dropped out in favour of joining the Kessel team and racing at Le Mans. She was one of the Kessel "Iron Dames" with Rahel Frey and Manuela Gostner. They scored the first finish for an all-female team at Le Mans itself for about ten years, ahead of the "sister" Iron Lynx car of their male team-mates. Although the Dames were troubled by their share of car-related difficulties in the European Le Mans Series, they still managed second places in class at Silverstone and Paul Ricard, leaving them fourth in the GTE class overall.

The Iron Dames entered the Gulf 12 Hours again in 2019 and were closing on third place with Michelle in the car. A collision with a backmarker who did not let the faster car through in time put them out of the race.

Driving solo, Michelle did some rounds of the Denmark Super GT championship, driving an Oreca-powered prototype. She won twice at Bellahoj and also picked up a fourth at the same track.