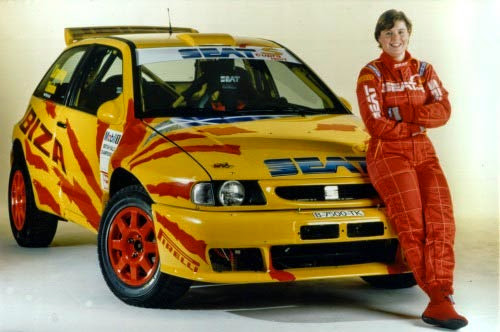 Barbara with the SEAT

Barbara, an English-based Scot, learnt to drive at a young age. Her parents ran a large farm, so there were tractors for her to practise with, and open spaces so that she did not have to go out on to the road. She took up rallying in 1984, at 18. Her first car was a Talbot Sunbeam and she used it for club events. The farm background must have been a good training ground for rally driving as Barbara's brother, Jock, also took part in the sport.


She continued to compete at this level for several years, until she was awarded a place at a Norwegian rally school on merit in 1990. Soon after this, she got herself a drive in the Peugeot Challenge and was the best female in the series. She was also runner-up in the 309 class. Not content with the Ladies' Trophy or the second place, Barbara pushed harder and won the 309 class outright in 1991, as well as another ladies' award.


After a couple of years spent working mostly as a race and rally driving instructor, Barbara's career took a leap forward in 1996, when she was picked to be a member of the new SEAT rally team, driving the Formula Two-spec Ibiza. With Roisin Boyd as her co-driver, she utilised all of her skills to help develop the car, which made its appearance on the UK rally scene towards the end of the year. Its first appearance was at the Lurgan Park Rally in Ireland. The Trackrod Rally, a Mintex National Championship counter, was an early triumph: the pair scooped a class win and 25th overall. It was time to take on the RAC Rally for the first time, and Barbara did not disgrace herself with 47th overall, thirteenth in class, out of a large start list.


With development out of the way, SEAT entered the British Rally Championship in 1997. Barbara gained a new co-driver in Lisa Addy, and the two women made a reasonable start to their season at the Welsh Rally, coming 24th. They were a disappointing 45th in the Pirelli Rally and failed to finish the RSAC Scottish or Ulster Rallies, but they ended the year on a high note with a pleasing twelfth in the Manx Rally. They were better placed in some non-championship events: second in the Galloway Hills Rally in Ireland, and fifth in the Jersey Rally.


They continued in the same vein the following season, with a battling tenth overall in the Welsh forests. The Pirelli Rally was kinder to Barbara this time and she was 16th, and although she could only manage 51st in the Scottish event, it meant that she had a 100% finishing record that year. Despite the disturbance of a change of navigator, she finished the season strongly, coming 19th in the Ulster and a career-best seventh on the Manx event. Barbara won the first of her British Ladies' Rally Champion titles this year. Outside the BRC, she also claimed one of the results she is most proud of: a fourth overall in the Silverstone Rallysprint.


Having formed a strong partnership with her new co-driver John Richardson, Barbara, now based in the Midlands, returned for another crack at the BRC. Her team-mate was the Welsh star Gwyndaf Evans, as it was in 1998. The Ibiza was 24th in Wales, but failed to finish the Pirelli. A pair of fourteenth places in the Scottish and Jim Clark Memorial Rallies followed, which must have been pleasing as Barbara was on home turf. She was 20th in Ulster but fared much better on the Isle of Man: sixth overall. She defended her Ladies' crown but did not score as well in the championship as previously.


The SEAT contract came to an end in 2000, and Barbara did not compete much that year. She concentrated on other things in her life, such as garden and interior design, and did some instructing and after-dinner speaking. It was time for a change of direction, which came in the form of circuit racing with the elite Parr Motorsport team. Parr were putting together a line-up for the Porsche Cup and Barbara, despite her lack of competitive track experience, fit the bill. She proved a natural in the Porsche 911 and was soon taking on much more experienced sportscar racers like Mark Sumpter and Peter Chambers. Her best finishes were eight third places, and she was eighth in the championship after showing some real aggression and determination on the track. 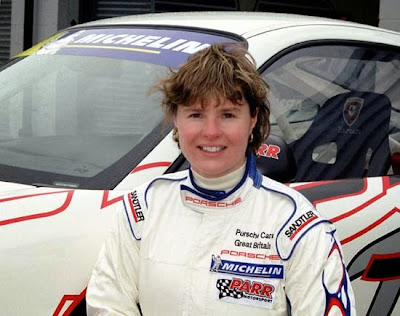 Barbara in the Porsche Cup


Her Porsche successes brought Barbara back into the spotlight towards the end of the season. Rallying had been hit badly by that year's foot and mouth disease outbreak, but some events were still taking place. Formula Rally, a series for Super 1600-spec cars, had taken the place of the cancelled BRC, and she was drafted in by Peugeot at the end of the season to give the new S1600 206 its first outing. She and new co-driver Ieuan Thomas were eighth on the Banbury Rally, bringing the car home safely.


More work for Peugeot followed in the form of the World Cup Rally, a long-distance event for S1600 and smaller cars, which followed a route across Europe and North Africa more familiar to Paris-Dakar competitors. Barbara teamed up with experienced navigator Alyson Marlow in a works-provided 206 and the pair were one of the favourites to win. In the early European stages, they led the rally, and continued to put in good stage times despite flash floods in Morocco and very difficult terrain. After almost a fortnight of gruelling competition, one of the con-rods in the Peugeot's engine went. This left Barbara with only three cylinders coming back across France. She nursed the car to the end, but the win was handed to Donie Keating in a VW Polo, who was ahead by three minutes by the time the crews reached Brooklands.


After an exciting end to 2001, 2002 was very quiet on the competition front. Barbara renewed her links with SEAT and did some racing instruction for the marque, as well as driving the safety car for the international Porsche Cup round at Spa. She also attended the Wild West Rally in the USA, with the view to putting together a programme for 2003 in the SCCA Pro Rally Championship. Several British drivers, including David Higgins and the late Mark Lovell, had achieved considerable success over there. She intended to use a Subaru Impreza after sampling some Japanese power at a rallysprint event at Silverstone in 2001.


The American deal did not come off, and some testing she did for the ASCAR stock car series did not lead to a full-time drive, either. Much later, in 2004, she worked as a team manager and spotter to Kelly-Jayne Wells at Rockingham.


Later in the season, she accepted a guest drive in the Binbrook Stages Rally, and renewed her acquaintance with the Peugeot 205 after a gap of more than ten years. Barbara made a storming start to the rally, and proved she still had the touch by posting the first female fastest time in a rally since Louise Aitken-Walker in 1981. However, the engine in the 205 gave up on the next stage, which was unfortunate.


Barbara's active career comes to an end here. Since 2004, she has been involved in motorsport as an administrator, as the championship co-ordinator for first, the SEAT Cupra Cup racing series, then the UK Formula Ford Championship, an acknowledged breeding ground for stars of the future. In 2005, she was set the arduous task of revitalising the Formula Ford series, which had fallen behind other one-make series of late. She also works as a driver coach, and a rally organiser.


In addition to this, Barbara has never formally announced her retirement, so we may not have seen the last of her behind the wheel. However, her personal website has not been updated since 2010.

(Image from www.barbaraarmstrong.com)
Posted by Rachel H-G at 14:01