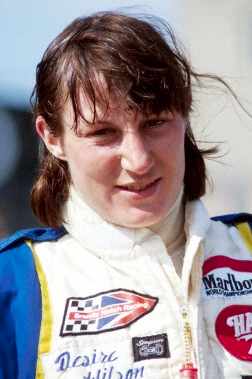 South African Desiré Wilson is most famous for not qualifying for the 1980 British Grand Prix, although elsewhere in her career, she was a big success. She began driving midget cars at the age of five and it was soon clear that she had outstanding talent. At twelve, she came second in the South African nationals. Despite her obvious skill, she decided not to pursue midget racing much further, and concentrated on athletics and riding.

Eventually, she returned to the sport. In 1972, when she was 19, she stepped up to full-size long-track competition and was fourth in South African Formula Vee. The following year, she was runner-up. Ambitious for an international racing career, she switched to Formula Ford, and won the South African championship in 1976.

In order to make further progress up the international motorsports ladder, Desiré moved to Europe for the 1977 season. She competed mainly in Formula Ford still, in the Benelux and UK championships, where she was third and fourth respectively, winning a race at Zandvoort. She also took part in Formula Atlantic, hillclimbs and a few sports and saloon races.

She took another huge jump in 1978 after testing a Formula One March. After impressing team bosses, she signed up for the Aurora F1 Championship, a series for superseded Formula One cars, with a few F2 machines thrown in, similar to the recent EuroBOSS series. She drove a Cosworth-powered Ensign and her best finish was third, at Thruxton. She also came sixth twice and was tenth overall. As she learnt the European tracks, her placings improved. In 1979, at Zolder, she became the first woman to lead an F1 race, in her Tyrrell. Although she spun in the wet, she still fought back to third place and claimed the fastest lap. This was the first of a string of podiums that year. Desiré also kept her hand in in sportscars, driving a Lola to a number of meritorious finishes.

1980 was the year that Desire hit the big time. It started inauspiciously; despite the previous year's triumphs, she was without a sponsor for the Aurora series and retreated to New Zealand to race in Formula Pacific. Teddy Yip's Theodore team came to the rescue, and she was back in the UK, driving a Wolf WR3 for the second round at Brands Hatch. She won the race, having led from the start, the first and so far only woman to have done so. She was also second at Thruxton, a favoured track with Desiré, and third at Mallory Park.

Her Aurora achievements were not her only successes that year. She had formed a partnership with Alain de Cadenet and was sharing driving duties in his self-built Ford prototype in international sportscar races. Back at Brands, scene of her Aurora victory, she and de Cadenet were an impressive third, but the best was yet to come. The pair won both the Monza 1000km and the Silverstone 6-Hour races.

Desiré's star was rising fast. Her exploits in Aurora F1 and with de Cadenet drew the attention of at least one Formula One team. She was selected by private team RAM to drive a year-old Williams FW07 at that year's British Grand Prix. Things looked promising in pre-qualifying, where Desiré was twelfth overall. However, it was not to be her weekend. The car that she had practised in was hurriedly replaced with an inferior, adapted Williams which she had beaten several times that year in Aurora F1. The car's poor aerodynamic modifications and Desiré's lack of experience with it meant that she could not qualify, lapping faster only than Keke Rosberg.

Her run of rotten luck at the top also included that year's Le Mans. After a practice accident, she and Alain de Cadenet managed to set the eighth fastest time, but they were not allowed to start, in view of their earlier shunt.

The following year, she got a chance to redeem herself. After a break from the track, she accepted a drive in her home Grand Prix, with Tyrrell. Disagreements within F1 meant that it was being run as a non-championship race, but it was a strong field nevertheless. She qualified sixteenth and suffered a nightmare start, stalling on the grid. However, once away, she quickly caught up, overtaking her team-mate Eddie Cheever and running as high as sixth. An altercation with Nigel Mansell's car on lap 51 sent her off the track and she retired with gearbox trouble, but she had managed to impress Tyrrell. She was offered further drives, but due to her lack of sponsorship, she was unable to take them up. The political situation in South Africa did not help her cause.

Again at Brands Hatch, she was eighth in a World Championship sportscar race, driving a Porsche with Preston Henn, Edgar Doren and Skeeter McKitterick. Sportscars now became her main focus for the time being. In a similar 935, she raced in the 1982 IMSA series, but failed to finish any races. Preston Henn had hired her for his Swap Shop team, mainly as a driver coach and mentor to his daughter, Bonnie, who was racing for the team that year. When Bonnie decided that motor racing was not for her at the end of 1982, Desiré was let go.

She did not fare any better in the Ford Grid Plaza, in IMSA or at Le Mans. She only lasted 24 minutes of the French classic before the engine expired. Her only really good result that year was a fourth with Jonathan Palmer in an endurance race at Brands, her favourite stamping ground, where there is now a stand named after her.

1982 also saw the start of Desiré's Indycar career. She passed her Indianapolis 500 rookie test without a problem and set a female lap record during qualifying, but once again she was out of luck at the blue-riband event itself. Due to repeated engine failures and the death of a team-mate during practice, her qualifying runs were aborted and she failed to make the grade. The following year she also failed to qualify a March, but took part in eight other Indycar races, with a best finish of tenth at Cleveland. Her finishing record was poor, not always due to driver error, but the two finishes she did score that season were impressive for a novice. This is especially true as she was driving through the pain barrier, due to a leg injury sustained at a sportscar event.

Between 1984 and 1986, she took part in three more CART events, with a best finish of thirteenth, although she never qualified for the Indy 500.

Sportscars had definitely not been forgotten during this time. She competed around the world in different series and scored some decent finishes, but her highlight of 1983 was her seventh place at Le Mans, driving a Porsche 956. With the help of Axel Plankenhorn and Jurgen Lassig, she finally broke her major-race duck with an excellent overall finish and class win.


Although her racing schedule was thinning out somewhat, there was still plenty of competitive spirit left in Desiré. In 1987, she won an enduro at Sears Point, driving a Saleen Mustang with Lisa Caceres. Still with Saleen, she won the Sebring 6 Hours with Scott Pruett, and also won them the constructors' championship. After a few Porsche sportscar outings in Japan and the UK, she returned to single-seaters in 1989 to come fourth in a British F3000 race. In 1991, she had another crack at Le Mans in a Spice SE90C Ford, driven by an all-female crew. Desiré and Lyn St. James were both former Indycar drivers and Cathy Muller was an aspiring single-seater talent. They crashed out early on. Desiré also crashed out of the Daytona 24 Hours two years later. However, that season she redeemed herself, by coming second in a sportscar race at Willow Springs, driving a Mazda RX-7.

After a break from competition, Desiré had a good year in saloon cars in the USA in 1996. She won the Grand Prix-supporting Chrysler Neon Challenge at Detroit, and raced a Mazda in US touring cars. Her best finish there was sixth. Before retiring, she drove the pace car for CART events and helped to organise the all-female PPG pace car team.

For a couple of years, Desiré busied herself with motorsport administration and helping to run her husband Alan's track design business. She was one of the directors of the short-lived Women's Global GT Series, and she and Alan were much in demand as consultants to the motorsport industry. However, she could not get racing out of her system, and continues to race historics to this day. She got a resounding cheer whilst driving a Tyrrell F1 car at the Goodwood Festival of Speed in 2002, where the commentator announced her as "the only woman to have won an F1 race". That year, she renewed her partnership with Lyn St. James, piloting a Ford Galaxie 500 touring car. Her best finish on the historic scene is probably fifth at the Goodwood Revival, driving an Aston Martin DB4 Zagato with Gillian Goldsmith.

Desiré is a regular visitor to Goodwood: at the 2008 Revival, she fought tooth and nail to keep her Gordini in second place in the Freddie March Memorial Trophy, only to see the car expire before she could hand it over to her team-mate. 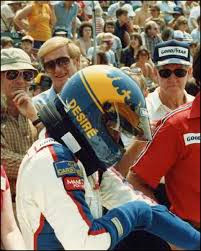 Desiré is truly a speedqueen; throughout her racing career, she was easily recognisable by the crown design painted on her helmet. She is one of South Africa's finest motor racing exports.

(Helmet image from www.wilsonmotorsport.com)
Posted by Rachel H-G at 13:20