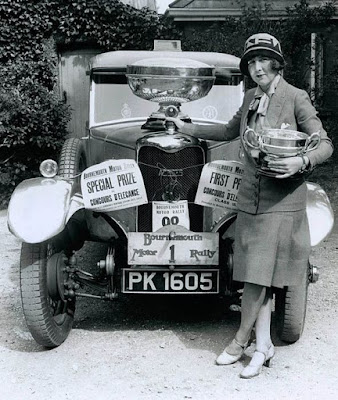 Mary after the 1928 Bournemouth Rally

She was born Mildred Mary Petre in 1895. Her father was related to Kay Petre’s husband. Her mother was American, and an actress. The young Mildred very soon developed a taste for adventure, alongside her brothers. When she was eleven or so, she learned to ride a motorcycle, and by the age of fifteen, was riding one on the road, sometimes with her dog in a sidecar. That was, until she was stopped by the police, fined and barred from riding until she reached the appropriate age.

Her adventures continued on four wheels in 1920, with a brief hiatus for the birth of a son, Anthony. This would have been highly shocking at the time, as she was not married to the boy’s father. In 1926, she married The Honourable Victor Bruce, who seems to have adopted Anthony. Mary almost always styled herself “Mrs Victor Bruce”, and maintained an outwardly ladylike appearance and demeanour. She is said to have stated “don’t call me a Women’s Libber”. During her career, her path crossed that of several female racers and aviators, but she never particularly sought to be part of their “set”. Her self-presentation as a traditional wife and “lady” may have been an effort to offset her past as an unmarried mother, but this is conjecture.

Victor was a rally driver with links to the AC marque, now run by Francis Selwyn-Edge, the patron and probable lover of the Edwardian racer, Dorothy Levitt. After Victor won the Monte Carlo Rally in 1926, driving an AC, Mary started petitioning to Edge for a drive. He of all men knew the publicity value of a woman in a car, having stage-managed Dorothy Levitt twenty years before. Mary was set up with her own AC Six for the 1927 Monte, and promptly won the Coupe des Dames. She was sixth overall, and drove solo (with two passengers but no co-driver) and non-stop from John O’Groats to Monte Carlo, a considerable physical feat.

The single-crewed Monte Coupe des Dames was only the first of a series of challenges and record runs that Mary, usually with Victor, undertook. Straight after the Monte, they drove to Montlhéry, taking an 8000-mile detour through Italy, North Africa and Spain, before completing a 1000-mile run at the track, which was a record in itself. That July, the Bruces drove as far above the Arctic Circle as they could, and planted a British flag at their furthest point. In December, it was back to Montlhéry for an attempt at the 10,000 Mile record, which they broke by driving at an average of 68mph for ten days. This was made more remarkable by the fact that there was snow on the track, and they had to undertake fifteen hours of repairs after a roll.

In 1928, she continued to compete in the AC. As well as support from Selwyn-Edge, she capitalised on her fame by writing down her experiences, which were published in newspapers and as books. She was fourth in the Monte Carlo Rally, although Charlotte Versigny just beat her to the Coupe des Dames. Later in the year, she entered the Alpine Rally and got to the finish, but was disqualified for colliding with another car during the event. She also seems to have rallied in the UK, and is pictured with trophies from that year’s Bournemouth Rally.

In 1929, Mary’s third attempt at the Monte did not go to plan. She was driving an Arrol-Aster, and started from Riga. The car developed electrical problems and almost caught fire at least once. She did not finish.

Later that year, she returned to Montlhéry and record-breaking. Her car this time was a 4.5l Bentley “Double Twelve”, raced by Henry Birkin and loaned to Mary by the Bentley factory. She broke the Class C record by driving for 24 hours, solo and non-stop, at an average of just over 89mph.

1930 saw her last attempt at the Monte, driving a Hillman. She chose the most obscure start point she could find, which was Sundsvall in Sweden. This proved to be a difficult route, but she got to the end of the rally in 21st place.

1930 also saw her biggest circuit race. She and Victor competed in the Brooklands Double Twelve in May, driving an Alvis Silver Eagle. They were thirteenth overall.

After this, Mary’s interest in motorsport waned. In 1929, she took up speedboating, and set some cross-Channel records. The following year, she learned to fly an aeroplane. With only 40 hours’ experience, she set her mind to flying around the world. For the next few years, she made and broke several aviation records, including flying solo across all the continents of the world, and becoming the first woman to fly to Japan. Her adventures, including many near-misses, were recorded as they happened through a tape recorder in the cockpit, to be written up into articles and a series of books. Among the more unlikely sources of Bruce news were Ovaltine adverts, which must have proved quite lucrative.

Mary eventually founded her own airline, Air Dispatch, which started by delivering newspapers, but by the start of the War, was running a regular passenger service to French resorts. Air Dispatch was involved with repairing crashed aircraft during the war. By this time, Mary and Victor had separated. Mary’s son, Anthony, would in time take over the running of the company. Her airline activities reportedly made her a millionaire in her own right, something that she long had ambitions to become.

The veneer of respectable femininity that Mary maintained – some of the less complimentary papers called her “The Flying Housewife” during her aviatrix days – barely concealed an extremely driven, capable woman, with unlimited energy and ambition. This showed when she tested a Ford Capri in the 1970s, and looped the loop in a plane at the age of 81.