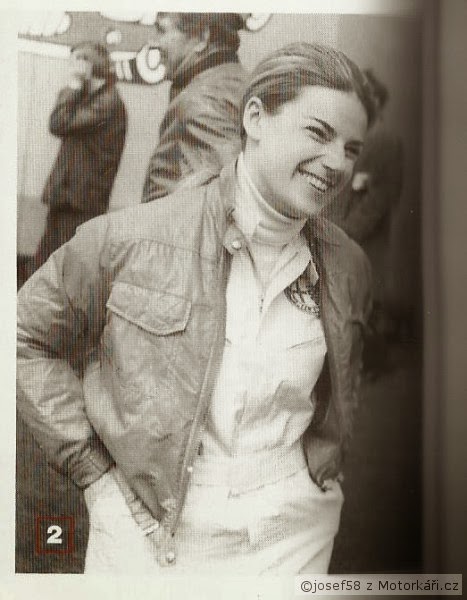 Another versatile Belgian, Christine Beckers often entered races simply as "Christine", no other identification needed. She was a gifted driver who achieved success both on the track and the special stage, and more. Motorsport had been her ambition since childhood and she first realised her dream in 1966, after leaving university. Her first car was an NSU Prinz, which she used for rallies in France and Belgium, including the Twelve Hours of Huy.


Although rallying remained her main activity, Christine branched out into circuit racing the following year, when she completed her first Spa 24 Hours with Marie-Claude Beaumont. The car was an NSU 1000 TTS, similar to Christine's rally car. They were the first female finishers, 24th overall and Christine was also the first Belgian home. Team officials from Alfa Romeo Benelux noticed her talent and she was rewarded with a works contract for the 1968 season. This was the beginning of a long and prosperous relationship with the marque for the Belgian woman, who was still only 25.


Her first year as a professional works racing driver took her to race tracks and hillclimbs all over Europe, including her second Spa 24 Hours. She and Nicole Sol were 23rd in a 1750 Berlina. Surprisingly, she still had time for her first love, rallying, and won the Coupe des Dames on that year's Tulip Rally in her old NSU. She drove the Alfa GTA and GTV mainly, taking in Belgian rallies, the RACE Rallye Espana and the Criterium des Cevennes. She was tenth in Spain. In addition, she won the De La Reine-Huet hillclimb outright and won her class in the De La Roche hillclimb.


1969 was an even busier year. Christine collected 20 class wins for Alfa in various series, including a ninth place overall in a European Touring Car race at Monza with Jacques Dumoulin, as part of Alfa's junior team. She got her first taste of top-class Alfa touring action at Spa in the 1600cc GTA, but retired. Later, she won the Benelux Cup at Zandvoort, driving the smaller GTAJ.


There was even better fortune to be had on the hills; she won the d'Houyet hillclimb outright and came second at de Marche. 1969 was also the year that she broke her rallying duck with an excellent win in the Ostend event. Despite her increased circuit involvement across Europe and beyond, she still entered many rallies, including the Tulip, Monte Carlo and Routes du Nord events. There were adventures in the South African-based Springbok Series too, where Christine had a best finish of seventh at Cape Town.


Touring cars were her main focus for 1970, driving the works Alfa again in the ETCC. She made history at the Nürburgring by becoming the first woman to mount the podium in an ETCC race, after coming third in the 2000 GTAm, with Teodoro Zeccoli. Her exploits were used in an advert for Alfa Romeo road cars. For the rest of the season, she drove either the GTAm or the GTV and came ninth in the overall standings after a superb season. She was fourth at Brno, Jarama and Monza and fifth at Salzburg and Budapest. Away from the ETCC, she was second in the Boucles de Spa in an Alfa Duetto, and in a race at Montlhèry. Another attempt at the Spa 24 Hours, with Dutch driver Liane Engeman, ended in retirement, but this was a rare disappointment. She continued to finish strongly in hillclimbs and won the Coupe des Dames on the Criterium des Cevennes in a GTAm, coming 15th overall.


1971 saw Christine branch out again. For the season-opening Monte Carlo Rally, she switched to the Alfa rally squad in the super-quick Giulia, but failed to finish. In addition to her Alfa activities, she drove a Porsche 911 to eighth place on the Tour de France, with Ennio Bonomelli.


It was back to the circuits in 1972, and a particularly successful year for Christine, with two outright wins at Dijon and Paul Ricard. Her new challenge was sportscars, and the following season, she raced a Chevron B21 to good effect at the Le Mans Four Hours, where she won her class. Her first attempt at the Le Mans 24 Hours was a stormy introduction. She and Bob Wollek were sharing the Chevron, but Christine crashed heavily early on and was injured. However, by the end of the season she had bounced back, with a second place on the Paris-St. Raphaël women's rally with "Biche" (Michele Espinosi-Petit). By now, she was also running the racing school at Albi in France.


She stuck with the Chevron in 1973 and finished well in the Le Mans Four Hours again, coming seventh with Roger Dubos. The pair had previously competed together in the 1972 Monte Carlo Rally, in an Alfa Romeo 2000 GTV, but they did not finish. They were also ninth in the Spa 1000km. Christine's second Le Mans was a disappointment; the Chevron's fuel injection gave out early on and she did not get to drive. She also raced the Chevron at Nogaro, but the results have been lost.


1974 did not start well. The Ford-engined Chevron B21 proved unreliable at the Spa 1000km, and Christine and Yvette Fontaine had to retire. Its replacement, the B23, also gave up on her and Claude Michy at the Le Mans Four Hours. To add insult to injury, a drive in the Fiat X1/9 Abarth rally prototype in the Tour de France ended in another retirement. However, there was unfinished business to be dealt with. The Chevron came through at the Le Mans 24 Hours. Piloted by Christine, Marie Laurent and Yvette Fontaine, it won the 2000cc class after leading for much of the way. The all-female team were 17th overall. A win on the last running of the Paris-St. Raphaël Rally with Biche also brought some welcome relief.


In Christine terms, 1975 was a quiet year. She stuck to racing a Triumph Dolomite at home in Belgium, but still managed to earn the Belgian national racing crown. This included another run in the Spa 24 Hours, which resulted in a 24th place. Her team-mates were Jenny Birrell and Marianne Hoepfner. Partnered by Willy Braillard, she also tried her hand at the Spa 1000km again, in a Ford-engined Lola T284. They did not finish.


After a season's break, she returned to Le Mans as part of the Inaltera-Ford team. She and her team-mate, came a creditable 21st overall, third in class. Her performance was enough to secure her a works seat for next time. Paired with female Grand Prix driver and sportscar ace Lella Lombardi, Christine drove hard to a strong eleventh place overall in 1977. The pair had previously driven the car at the Daytona 24 Hours and finished 47th, despite a lengthy stop after an accident.


The paths of the two female stars crossed again in the USA in 1977, but as rivals this time. Both took part in the NASCAR Firecracker 500, a considerable achievement for a European driver. Christine retired with no brakes while in 23rd place. She had better luck with her return to touring cars for Alfa, with second places at Mugello, Zeltweg and Spa.


1978 saw her drive in various ETCC-affiliated series, both in an Alfa and a works Skoda. She was not quite on the pace and did not trouble the top finishers.


Christine Beckers always looked for new challenges, and her latest one in 1979 was the Paris-Dakar Rally, which she completed on her first attempt, winning the Coupe des Dames. She was driving a Toyota and came 41st overall. Sportscars were not forgotten; she had an outing in the Spa 24 Hours with Jean-Paul Liebert and Pascal Witmeur in a Chevrolet Camaro. In 1980, she raced a powerful BMW M1 Procar at the Daytona 24 Hours, but did not last the distance.


Her fourth and final attempt at the Dakar was the most successful. Driving a Range Rover, she was fifth overall, first privateer and first woman to the Senegalese capital. After this triumph, she retired from competitive motorsport, having competed in three continents and been both race and rally champion in her home country. Following her retirement, she raised two adopted children and worked as a Formula One journalist, among many other activities. In recent years, she has come out of retirement to race in classic events, mainly in an Alfa Romeo.