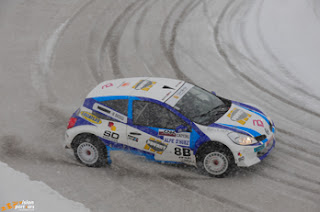 Marlène Broggi in the Clio

As usual, many female drivers braved the Alpine ice in the 2011-2012 running of the Andros Trophy.
Marlène Broggi was the leading lady in the main Trophée, having taken part in all of the rounds. She also competed in the Electric Trophy, but was not as fast as Margot Laffite.

Women drivers in the 2012 Dakar 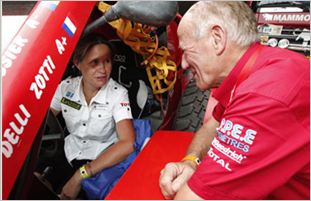 Isabelle Patissier at the start in Argentina.

The 2012 Dakar was not a vintage year for female participants. Isabelle Patissier was this year's leading female driver. She was 29th overall in the Dessoude Oryx Buggy, co-driven by Thierry Delli Zotti, just over 21 hours behind the winning MINI of Stephane Peterhansel.

Susan Jones was set to enter the Dakar in a Desert Warrior, but did not make the start.

No female drivers entered the Truck class this year. The only other woman finisher was motorcyclist Eulalia (Laia) Sanz Pla-Gilibert, who was 39th on a GAS.

(Picture from www.automobilsport.com)
Posted by Rachel H-G at 03:17 No comments:

After another long hiatus, Speedqueens is now being updated once more - there are many more posts to come.
However, there will not be any new posts for a little while, as I need to go through and update existing ones.

Thankyou to everyone who reads this site. Last month, it received over 5000 views for the first time!
Posted by Rachel H-G at 03:34 No comments: 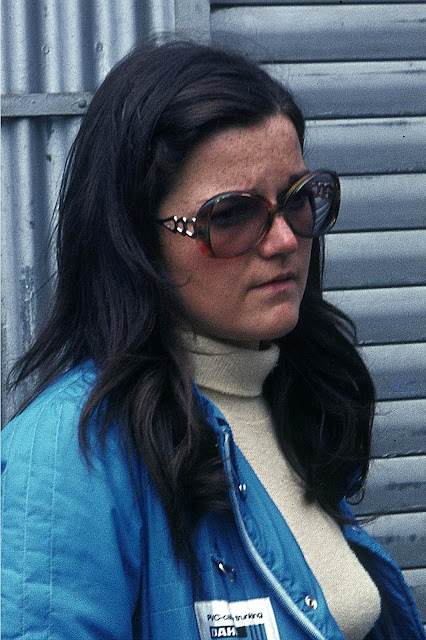 Waltraud Odenthal raced touring cars in Germany in the 1970s, up to ETCC level. The car most associated with her is the Ford Capri. She was affectionately nicknamed "Turbo-Maus".

Her career began in 1969, racing a Ford Escort in club events. Her father was a Ford dealer, so it was natural that she gravitated towards that marque. He was always supportive of Waltraud, buying her cars and maintaining them.

By 1971, she had got hold of her first Capri, a Group Two model. Her racing schedule was a mixed bag of German races, starting with the Nürburgring Grand Prix round of the ETCC, a six-hour enduro. Sharing her car with Klaus Fritzinger, she is known to have been fifth in the three-litre Touring class, although her overall result is lost. A second ETCC outing followed, at Zandvoort, driving solo this time, but she did not finish. A return to the Nürburgring for the 500km race, apparently single-handedly again, brought another retirement. A DARM race at Hockenheim gave her a third in the three-litre touring class, one above Klaus Fritzinger. Continuing the pattern, her next race, at Mainz-Finthen, ended in a DNF. She finished the season back at the Nürburgring in a mixed GT and Touring race, and won the Touring class for cars over two litres.

In 1972, she competed in the newly-inaugurated DRM (German racing championship), in a Capri RS. She ran well in the first race, at the Nürburgring, finishing fifth, but did not finish the next round at Hockenheim. She returned to the championship for the sixth round, at Kassel-Calden, but did not finish there, either. The two Nürburgring races in September brought a fourth place and another DNF.

As well as the DRM, Waltraud drove in the Salzburgring round of the ETCC in Division 1, although she did not finish. During the summer, she took part in a trio of non-championship events at the Nürburgring. For the 1000km, she teamed up with Klaus Fritzinger again, but they did not finish. In July, Waltraud was supported by the Dahl-Kanal team for the 6 Hour race, the Grosser Preis der Tourenwagen. She and new team-mate Clemens Schickentanz did not make the finish. An additional GT and Touring event for Dahl-Kanal gave Waltraud, as sole driver, a third in the two-litre Touring class.

1973 began promisingly, with Waltraud’s first racing excursion to Italy. She and Klaus Fritzinger drove in the Monza 4 Hours, part of the ETCC. They were fifth overall in a Capri, sponsored by Waltruad’s father’s garage. Sadly, her DRM season got off to a bad start, with an accident in practice putting her Capri out of the first round at the Nürburgring. A second run in the ETCC, at Mantorp Park, and assisted by Hartmut Kautz, also ended before it started, due to an engine failure. The rest of the season consisted of six DRM rounds, of which two ended in DNFs. She was seventh at Diepholz and the Nürburgring, ninth at Kassel-Calden and fourteenth at the Norisring.

Her ETCC season that year consisted of three races: Vallelunga, the Nürburgring and Zandvoort. The German round was a single-driver effort, and Waltraud was third in the three-litre touring class. For the Zandvoort race she was co-driven by Karl-Ludwig Weiss, and they were eleventh. Her best finish came at Vallelunga with Klaus Ludwig: fourth. She always seemed to run well on her occasional visits at Italian tracks.

Her other racing activities included a mediocre seventeenth in the Norisring Trophy. 1974 was a year of change for Waltraud, whose father’s sponsorship diminished, leaving her to enter her own cars for most of the year. She also married Ford racing mechanic Jochen Stöhr in September.

1975 saw a smaller racing timetable for Waltraud than in previous years. Her activities were restricted to Germany and Austria, and there were no more ETCC races. She was supported by Odenthal Ford for her first race, a German sports and touring event in which she was eighth, but after that, she was mostly on her own. She was second in class at a similar event at the Salzburgring for the Diermeier team after failing to attend the Nürburgring DRM race. Her next race, at AVUS, resulted in a DNF, after an accident on the warm-up lap. Her first DRM start, at the Nürburgring, then gave her a seventh place, and her season started looking up. She followed this with her first major win at Mainz-Finthen, against Porsches and BMWs. This was followed by a touring class win at Ulm-Mengen, for Diermeier, and a eighth at Hockenheim in the DRM.

By 1976, it appears that Waltraud was winding down her racing career. Out of seven events for which she had registered, she attended four. The first was a sports and touring race at Sylt, in which she was sixth, behind former team-mate Clemens Schickentanz and Grand Prix driver Rolf Stommelen. Again in a self-supported Ford Capri, she took on three DRM races towards the end of the season, finishing fifth and ninth at Hockenheim and eighth at the Nürburgring.

She retired in 1977, after never really recovering from her AVUS accident in 1975. Her last race was a Group 5 event at the Nürburgring, and she was fourth in her own Capri. After retirement, she settled into family life, but she never really left motor racing behind, and makes semi-regular appearances at historic events in Germany.