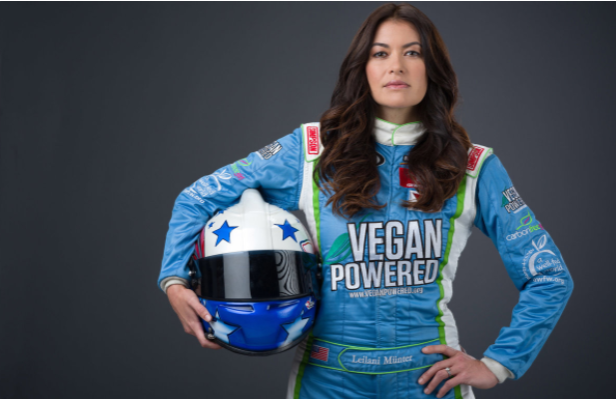 Leilani Münter has raced in stock cars and the Indy Pro Series (Indy Lights). She is unusual in that she combines a career in motorsport with environmental and animal rights work. Most of her racing has been in the ARCA stock car series.

She has a Hawaiian mother and a German father. Her childhood was not spent at the karting track; she was academic as well as being interested in animals and nature. She was 26 before she got into a racing car, having earned a degree in biology and worked as a film stunt double. Her first races were in her home state of California in 2001, then she moved to North Carolina to be closer to NASCAR action. By 2003, she was taking part in the NASCAR Weekly Racing Series. Her programmes took in Late Models and the occasional single-seater race.

Out of 39 races between 2001 and 2007, she finished in the top ten 19 times, and the top five, nine times. Her highest finish was fourth, at Texas Motor Speedway in 2006. The same year, she passed her Daytona rookie test.

She decided against a run in ARCA stock cars in favour of a part-season of the Indy Pro Series in 2007. She only did two races, finishing thirteenth in Chicago and retiring at Kentucky, despite qualifying fifth. This was due to picking up a puncture during a multi-car pile-up. She had been running in fourth place. Her funding dried up after this, and she looked towards stock cars again.

It was 2010 before Leilani got back in a car. She drove Mark Gibson’s Dodge in two ARCA races: Daytona and Kansas. She did not finish either and retired very early on both times. In the case of the Daytona race, after a crash.

She took a break from the track and concentrated on environmental campaigning for a while. In 2012, she intended to compete for the whole ARCA series, in a Dodge Charger. Unfortunately, she only managed the first round, and was 36th. The Tony Marks-owned car was promoting the anti-dolphin hunting film, The Cove.

In 2014, she made a limited return to ARCA, beginning with a 28th place, at Daytona. She was driving an alternative-fuel car, and survived a crash early on. Later in the season, she managed two twelfth places, at Talladega and Kansas, driving a car promoting another protest film, Blackfish. This is about killer whales.

In 2015, she did one race, the Daytona ARCA round. She qualified tenth, but crashed out on the 53rd lap of 80. This was her first time driving for Bill Venturini, who would give her rides for the next couple of seasons.

In 2017, she started racing under the "Veganpower" banner, and entered two ARCA races, at Daytona and Talladega. She was 19th at Daytona but did not finish at Talladega.

The Veganpower team came back in 2018 and Leilani finished eighth in the Daytona 500. Shortly afterwards, it was announced that she would contest eight rounds of the ARCA series. Bill Venturini would be running her car. She was 20th in the ARCA championship, with two top-ten finishes: eighth at Daytona and ninth at Michigan.

Leilani has announced that 2019 will be her last year of competition and Daytona probably her last race. She qualified third in a Venturini-run Toyota and finished in 15th place.

(Image from www.arcaracing.com)
Posted by Rachel H-G at 14:02 No comments: