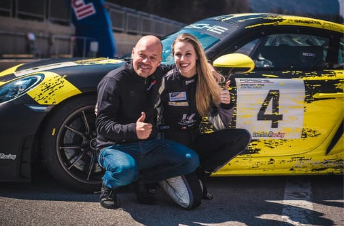 Marylin Niederhauser is a Swiss driver who mainly competes in sportscar racing, having spent some time as a teenager in single-seaters.

Her first car races were in Formula 4 in Germany, driving for the Race Performance team. 2015 was her first year of senior motorsport, having raced karts since 2010, when she was fifteen. The Formula 4 season proved a challenge for her, and her best result was a 22nd place at the Sachsenring. She did not compete in all of the races this season, and was 49th in the championship, 22nd in the Rookie class. The team did not retain her services for 2016.

In 2016, she did eight F4 races for Rennsport Rossler, a new team to the championship. She had a best finish of 22nd again, at Oschersleben this time. After the fourth round, she parted company with Rossler, apparently amicably. She returned for the season finale with Lechner Motorsport, an Austrian team, but did not qualify.

Sensibly, she moved into sportscar racing in 2017, driving a KTM X-Bow in the GT4 European Series. She was part of an all-female Reiter team with Naomi Schiff and Caitlin Wood and they raced together in the championship’s Silver Cup. Her best result was sixth, at the Slovakiaring, one of four top-ten finishes, and she was 26th in the championship. The three had teamed up with Anna Rathe in the X-Bow for January’s 24 Hours and finished in 16th place.

Still in the X-Bow but mostly driving solo, she was one of the leading Pro-Am drivers in the 2018 Central Europe GT4 Cup, winning at Most and the Nurburgring and finishing second at Most, on the way to championship second, just five points behind winner Rob Severs.

At the end of 2018, Marylin attempted to restart her single-seater career in the all-female W Series, but did not make the cut in the first selection, although her erstwhile colleagues Naomi Schiff and Caitlin Wood did. She picked up a drive in the Porsche Sprint Challenge Central Europe shortly afterwards. Her car is a Cayman GT4. Pre-season, she performed well in testing and was well within a second of the leading driver.

Her early pace translated into two podium positions: third places at Salzburg and Most. This was in addition to four more top-finishes. She was fourth in the championship. 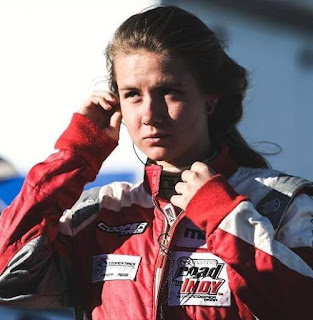 Bruna Tomaselli is a Brazilian driver who is making her way up the US single-seater racing ladder.

She first raced in South American Formula 4 in 2015. She was sixth in the championship, with several fourth places as her best result. In contrast, she survived a nasty accident at Rio Hondo. That year, she also made guest appearances in Sprint Race in Brazil.

Back at home in 2016, she continued her Formula 4 campaign. During the season, she scored five podium positions, and was fourth in the championship. The best of her results was a second place at Rivera, behind Juan Manuel Casella. Her four third places were at Pinar.

Her big project for 2017 was moving to the States in order to race in the Cooper Tires FF2000 championship. In between, she travelled to Bahrain for its round of the MRF Challenge. Her best finish was eighth.

In the USA, she was twelfth at Road America, on her way to 21st in the championship. She was driving for the ArmsUp team and completed almost all of the season.

She did another year in USF2000 in 2018, finishing 16th overall with one seventh place as her best result. This came from the first race of the year at St Petersburg. Without a series of DNFs towards the end of the season, her finishing position would have been higher.

Back home, she also competed in Formula Academy Sudamericana, finishing fifth in the Formula Renault-based series.

At the end of the year, she applied to be one of the drivers for the all-female W Series in Europe, and was placed on the initial list of 60 hopefuls. After the first selection event, she was rejected and took to social media to express her confusion and disappointment. She had been among the fastest drivers on the final “Race of Champions” task, but was not retained.

She raced in USF2000 again in 2019 for the leading Pabst Racing team. This year she was much more consistent and was a regular fixture in the top ten, as well as finishing all but one of her races. She was eighth in the championship and her best result was fifth at Mid-Ohio.

Surprisingly, she was invited back for another W Series assessment and will compete in the 2020 championship.

Prior to her motorsport career, Bruna played football to a high level and still retains an interest in the women’s game in Brazil. 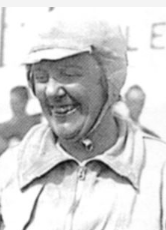 Marguerite Mareuse raced at Le Mans in 1930 and 1931 with Odette Siko, in a Bugatti. Alongside Odette, she was one of the first women to enter the famous 24-hour race.


They were seventh on their first attempt in 1930, but disqualified in 1931 for refuelling too early after Odette misunderstood a pit signal. If their result had been allowed to stand, they would have been ninth. The Bugatti was a T40 and belonged to Marguerite.


Marguerite entered the 1933 race with Jean-Pierre Wimille, but did not start. Marguerite had been sponsoring him for the previous year in his racing endeavours.


At the time of her first Le Mans 24 Hours she was already 41 years old, older than her team-mate Odette Siko.


As well as Le Mans, Marguerite entered a few Grands Prix, including the Tunisian and Oranie events of 1932 in North Africa. The Tunisian race was held at Carthage in April and she was fourteenth overall, sixth in the Voiturette class.


A few weeks later, she crashed out of the Oranie race in Algeria; her Bugatti T51 suffered a collapsed front wheel, which triggered a tyre blowout and ended with the car flipping over. Its driver received facial injuries that needed hospital treatment. She was understandably missing from the Casablanca Grand Prix in May.


Her car made it to the Dieppe Grand Prix but it was mostly driven by Pierre Leygonie, as Marguerite had not really recovered. She raced wearing a protective leather mask, in red to match the rest of her outfit.


She was not averse to the publicity-focused, female-only events that proliferated around Paris at the time. Driving her Bugatti, she was fifth in the 1931 Grand Prix Feminin at Montlhery, two places behind Odette Siko. She was an early member of the Club Automobile Feminin and took part in its Paris-Cannes Rally in 1930. A little later, she was fourth in the Paris-Brussels Rally, another ladies-only event, driving a Peugeot.


She and Odette sometimes drove together, as they did for the 1930 Circuit des Routes Pavees, then run as a six-hour race. They competed over 560km in their Bugatti, but the race was stopped a few minutes from the end due to a serious accident in which spectators were killed. Marguerite returned to the event in 1931, driving solo. She won the Coupe des Dames from two other women and took the prize in the 1600cc racing car class.


She was also an accomplished rally driver and won the Coupe des Dames in Monte Carlo in 1933, driving a Peugeot and starting from Tallinn. Her co-driver was Louise Lamberjack and they were thirteenth overall. The Peugeot was her favoured car for rallying, and she entered the Monte again in 1934, starting at Umea and with Simone Gonnot as navigator. Her earliest victory was probably her Coupe des Dames in the 1932 Paris-Juan les Pins Rally, in which she was sixth overall.


It was not such plain sailing on the 1935 Monte, in which she suffered another terrifying accident. The Peugeot burst into flames after hitting a lorry that Marguerite’s co-driver Mlle Cormet tried to swerve. They were on the first leg of their journey between Umea and Stockholm in Sweden and the car was completely destroyed. Neither crew member was seriously injured.


Occasionally, for faster events such as the 1934 Criterium Paris-Nice, she still used the Bugatti. Later, she tried other cars, including a Hotchkiss in which she finished the 1936 Monte Carlo Rally, with Fernande Hustinx. She used the same or a similar car for that year’s La Turbie hillclimb, competing against the likes of Rene le Begue.


Her car for the 1937 International Morocco Rally is not recorded, but she shared it with Anne-Cecile Rose-Itier. They did not finish.


It is occasionally mentioned that Marguerite’s daughter or daughters was also involved with motorsport, and that one of them may have been married to rally driver and film-maker Christian de Cortanze, according to posters on the forum-auto message board. 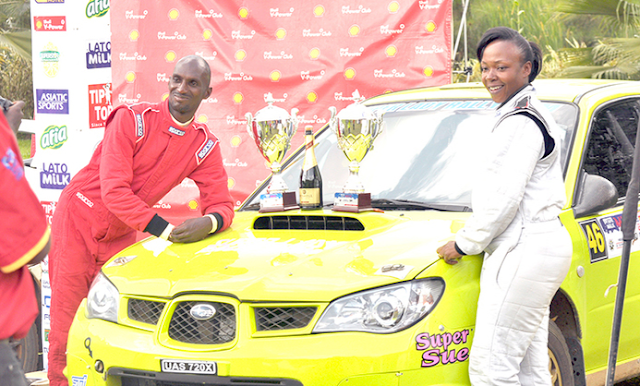 Susan Muwonge is a multiple rally-winning Ugandan driver active since 2005. She is also known by her nickname, “Super Lady”.

At first, she drove a Mitsubishi Lancer Evo 2 in rallysprints. She first competed in 2005, but burst onto the African rally scene in 2007, finishing the Pearl of Africa Uganda Rally in fifth place. Her car was a Subaru Impreza and she was the only woman to do complete the rally. She also won her country’s Clubmans’ championship.

The following year, she made the finish in Uganda, in fifth place. She also took part in the East African Rally Challenge, and was fourth in the Pearl of Africa event. At around this time, other female drivers began to appear in the Ugandan championship, and they often went by nicknames like Susan’s “Super Lady”. Rose Lwakataka, another Ugandan driver, was “The Black Bullet”.

In 2009, she concentrated on the Ugandan National championship, and was rewarded with her first outright win on the UMOSPOC Rally. She was fifth in the final standings.

She went back to rallysprints in Uganda in 2010, then returned to the African stages in 2011. This resulted in two wins in the season-opening MMC Rally and the Independence Rally, on the way to a Ugandan national championship title. She scored points in all of her events and earned two additional podium finishes. This was the first time this title had been won by a woman driver.

She planned to take a break in 2012 after certain rivalries went too far, but ended up back in the Ugandan championship. She did not win this time, but was the sole female finisher in the Pearl of Africa rally, in fifth place.

In 2013, she contested three rallies, coming seventh in the Pearl of Africa Rally in the Impreza, but recording DNFs in the MPU Challenge Rally and the Mosac Easter Sprint.

In 2014, she made another appearance in the Pearl of Africa Rally, and was thirteenth, in the Impreza. This was her only rally, as she had lost her major sponsor.

She was back in action in 2015, in an Impreza. Her best finish was a fifth place, in the Mountains of the Moon Rally. She was also sixth in the Pearl of Africa Rally.

In 2016, she was fourth in the Mountains of the Moon event, in the Impreza.

Susan returned to winning form in 2018, winning the Oryx Energies Elgon Rally outright in the Impreza. She also scored one second and two third places from seven events, the second spot on the crucial last round, which she started five points behind her nearest rival. This was enough to take her to a second Ugandan championship, even before she was promoted to winner of the Mbale final round due to a 10-minute penalty to Hassan Alwi.

Her critics claimed that she only won because three-time champion Jas Mangat withdrew, but she pointed to her previous title and said “you can’t fluke twice.”

2019 had a much lighter schedule with just three major rallies, one of which Susan finished. She was eleventh in the Lato Milk Mbarara Rally, in the Impreza.

Away from rallying, she is a teacher and runs a small school with her husband.

(Image from https://sports.chimpreports.com)
Posted by Rachel H-G at 15:29 4 comments: