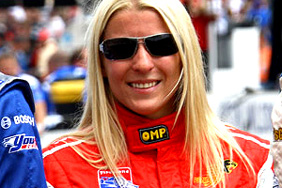 Pippa Mann began racing single-seaters in 2003, after several years of karting, including some time spent living and competing in Italy. Her first foray into senior competition was the 2003 British Formula Renault Winter Series, driving for the noted Manor Motorsport team. Although she only scored three points during her first three events, she was signed by JVA Motorsport for the full Formula Renault season in 2004.
This first full year was beset by some difficulties, including a DNF in her first event, and Pippa had to sit out three races. Her best finishes were two 17th places, at Oulton Park and Thruxton. She was 34th overall in the championship.
Despite her difficult season, she negotiated a deal with Comtec Racing to run in French Formula Renault and the Formula Renault Eurocup in 2005. Her French campaign started slowly, with 18th and 31st places at Nogaro, and remained cautious for most of the season, which was nearly a complete one, bar two meetings. Her best finish was tenth, at Le Mans, and she was 21st overall. In the Eurocup, the opposite was true: Pippa earned her highest finish, a fourteenth place, in the first round at Zolder, but suffered a series of DNFs and did not really progress much towards the end of the season. She was unplaced in the championship, interestingly, alongside future F1 driver Jaime Alguersuari.
Her contract with Comtec continued in 2006. This season, she raced in the Eurocup and in British Formula Renault. The Eurocup, once more, did not give her much joy, with a trio of fifteenth places at Istanbul, Misano and Donington her best results, although she did improve her finishing record somewhat. Again, she was unplaced. In the UK series, she broke into the top ten for the first time, with a ninth place at Donington. Her other finishes were usually just out of the top ten, and she was 19th overall.
In 2007, she moved into the World Series by Renault, now supported by the Cram/P1 Europe team. Despite another early top ten, a tenth in the first round at Monza, plus a pole position, Pippa struggled to maintain momentum. Her season was plagued by DNFs. At the end of the year, she was 27th. During her second year in the championship, she bettered her finishing record with a seventh at the Nürburgring, as well as a repeat of her first round tenth at Monza. Her list of DNFs was also shorter. She was 25th overall, with the small consolation of being the most successful female driver in the World Series. Although she was not among the front-runners, Pippa achieved a certain amount of notoriety within Renault circles, partly for her habit of wearing increasingly flamboyant dresses for pre-race parades, in preference to team uniform.
She also drove in the UK Porsche Cup during this time. From her six races in 2008, she achieved three finishes,  the best being two tenths at Knockhill. Since then, she has shown little interest in sportscars.
For 2009, she moved to the USA to contest the Firestone Indy Lights series, driving for Panther Racing. During her rookie tests, she was one of the fastest drivers on the course. In her first season, she got into the top ten three times, with a best finish of eighth, at Homestead, the last race of the season. During the year, she often qualified very well, in the top ten, but could not quite turn it into results. She was fourteenth overall. After that, Panther Racing ceased their Indy Lights involvement, leaving Pippa to search for a new team.
In 2010, she won her first race, at Kentucky, from pole. This was a welcome change, after the disappointment of crashing out of the lead at Indianapolis. She also managed a second at Chicagoland, and four other top tens. Her partnership with Sam Schmidt Motorsports really paid off, and this was the highest-achieving season of Pippa's career.
In 2011, following her improved performances in Indy Lights, she had her first part-season in the IRL, taking drives from two different teams. Her first race was the Indy 500, in which she was 20th, from 31st on the grid. She was driving for Conquest Racing. Later in the season, she made a deal with Rahal Letterman Racing. During her early tests with the team, she broke a vertebral plate and had to take time off, but later in the season, she entered the Kentucky round, and was 22nd. This led to a seat for the season-ending Las Vegas race, but Pippa was injured in the serious multi-car accident that killed former champion Dan Wheldon, and required surgery to her hand.
She intended to return to the IRL. In 2012, a deal to compete once more in the Indy 500 fell through at the last minute. She occupied herself with some radio commentary in the States in the meantime.
In September, she accepted a one-off drive in the AutoGP series from Campos Racing, at Sonoma, her first road-course race for two years. She was ninth and eighth.

Her career received a shot in the arm in 2013, when she was hired by Dale Coyne Racing. Her first Indy race back after her accident was the Indy 500 itself, which she did not manage to finish. Her next race, at Texas, also ended in a DNF, but at Pocono, she was fifteenth. She then failed to finish again at the Auto Club Speedway race. Her sponsorship did not permit her to do any more rounds, and this left her 31st overall. As she did in 2012, she turned to commentary work for the rest of the season.

In 2014, she became involved with the breast cancer organisation, Susan G Komen, and was one of their celebrity ambassadors. A team was put together to run Pippa in the Indy 500 again, driving a pink Dale Coyne Dallara-Honda, publicising the charity. In May, she made it to the start line, despite a string of problems which had prevented her from doing most of her planned testing. During the race itself, she was making up ground on her rivals after a poor qualifying session, but a badly-handled pit stop, which took far longer than it should have, pushed her back down the order. She finished the race in 24th place.

This was her only race of 2014, although she has done media work for Susan G Komen.

In 2015, she did a limited programme of Indycar races for Dale Coyne Racing, still in support of Susan G Komen. From six rounds, her best finishes were two thirteenth places, at Fontana and Pocono. She qualified for the Indy 500, and finished in 22nd place. At the end of the season, she was 29th in the championship.
2016 saw her undertake another very limited race programme for Dale Coyne, carrying the pink colours of Susan G Komen. She got onto the Indy 500 starting grid again, and finished in 18th place, the best result of her career at the Brickyard. Later in the season, she entered the Pocono race again, and was seventeenth. This year, she spoke out about the difficulties of remaining competitive with so few opportunities for high-level racing, and admitted that she had encountered sexism during her career.

Her now-traditional Indy 500 outing with Dale Coyne Racing led to a 17th place finish in 2017. This year, she started to expand her driving repertoire and joined Shea Holbrook in the Lamborghini Super Trofeo. They were sixth in the Am class of the North American series, with three fourth places. Driving solo, Pippa had a best finish of third at Watkins Glen. She now has an FIA endurance driver's categorisation of Silver and is able to race sportscars more widely.

Her 2018 entry for the Indy 500 was in support of organ donation, but sadly she did not qualify due to problems beyond her control.

Happily, her appearances in the Lamborghini Trofeo at Watkins Glen and Laguna Seca led to four second places. At the end of the season, she entered the 25 Hours of Thunderhill as part of an all-female team for Shift Up Now with Sarah Montgomery, Ashley Freiberg, Shea Holbrook and Amy Dilks. They just made it to the finish in their Mazda MX-5, 23rd and fifth in class, after having to perform some emergency repairs.

After the disappointment of 2018, Pippa's 2019 Indy 500 was one of her best yet. She was 16th for Clauson-Marshall Motorsport, having qualified in 31st place. She was on the lead lap and out-performed the likes of Helio Castroneves and Scott Dixon.

Aside from Indy, she continued to support and occasionally join the Shift Up Now team and also travelled extensively for other opportunities. At the end of 2018, she tested a Geox Dragon Formula E car at Ad Diriyah, Saudi Arabia, as part of an official female drivers' test. A year later, she was recruited for the X1 Racing League in India and drove a Formula BMW car for the Mumbai Falcons team. The X1 league looks to emulate the Indian professional cricket league with city-based team motorsport. Each team must consist of an international male and female pro, an Indian pro driver and an Indian am driver. The Falcons were second in the inaugural season, although Pippa's car blew up on track during the second round and limited her own participation.

Away from the track, she has been an outspoken advocate for female drivers, and launched her own talent scholarship in 2017. She has also criticised plans for a women-only single-seater championship from their beginnings in 2017, not backing down when the W Series was announced in 2018. By contrast, she praised the inclusive approach of the X1 Racing League. 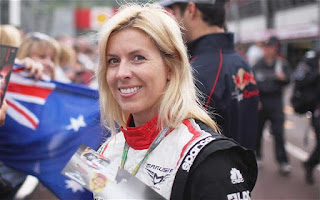