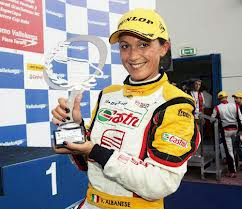 Italy has produced a fair number of female saloon racers. Some, such as Tamara Vidali and Romana Bernardoni, reached the highest echelons of touring cars and have their own dedicated posts. Others competed in the Italian CIVT series, or in Europe, or in one-make series.


Jessica Amendola - Italian driver who raced in the Euro Racecar NASCAR series in 2013, finishing eighteenth at Monza in a Ford Mustang. This was a comeback for her, as she started racing in 2000 and had to stop, due to funding issues and later, motherhood. Her first races were in the VW Fun Cup, and she also tried Formula Junior, although finances prevented her from progressing in single-seaters. In 2010, she raced an Exige in the Lotus Cup in Italy, and a Renault in the Megane Trophy. Her return in 2013 also took in the endurance rounds of the SEAT Ibiza Cup in Italy, where she drove alongside Nicoletta Bologna. She was the fastest lady driver at Franciacorta. In 2016, she was involved with a Merzario Academy, and drove a Ferrari, probably in a demonstration run.


Adele Arata – mainly known as a hillclimb driver, in the 1980s, usually driving a Fiat Ritmo or a Simca Rally. Her cars were run with minimal preparation, and were virtually in road trim. Unsurprisingly, she was never competitive, but she competed regularly nonetheless. In 1988, she tried circuit racing, in a Fiat Uno, entering some rounds of the CIVT touring car championship in Italy. She managed to finish three of her four races, with a best result of 16th in class.

Emanuela Bellini - raced in the Alfa Romeo 33 Trophy in Italy in 2006. She was not among the front-runners, but gained some notoriety for a spectacular crash in the wet at Magione. She continued to race the 33 for some time afterwards, reappearing in the championship in 2008, but by 2010, the car had been sold.

Leonida Bellini - competed in at least two seasons of senior Italian motorsport. She took part in the Renault Clio Cup in 2003 and 2004. In 2003, she managed at least two top-ten finishes, an eighth at Magione and a third at Vallelunga. In 2004, she was only 19th in the championship. Previously, she was active in karting in Italy, and won the National 125cc championship in 1997.


Nicoletta Bologna – probably best known for racing hybrid cars in Italy. She took part in two seasons of the Green Scout Cup, in 2011 and 2012. She was fifteenth in the championship in 2011, and 19th in 2012. Both times, her car was a Kia Venga. Previously, she raced a Porsche Cayman in the Cayman Cup in 2010, having taken part in a women’s Porsche series in 2008. That year, she also raced a Fiat 500, a car she returned to in 2009, again, in its one-make trophy. In between, she has competed in karting, on tarmac and ice. In 2010, she made one guest appearance in the Italian touring car championship, driving a Mini for BMW. As well as racing, she has tested a wide variety of cars. In 2017, she worked as a team manager in the Italian GT4 championship.

Deborah Broccolini - active in Italian club motorsport on and off since 1988. She competed in the CIVT throughout the 1990s after some years in junior formulae, but retired for ten years in 1997. As of 2007, she has mainly raced Alfa Romeo cars, particularly the 33, which she used in its one-make cup in 2007 and 2008. After that, she drove it to fifth overall in the Alfa Romeo Touring Cup. In 2011, she drove an Osella sportscar in Italian hillclimbs. In 2012, she also tackled Italian hillclimbs, but in a Citroen C1. She won her third Italian ladies' hillclimb title in 2013, and defended it in 2014, along with a class championship.


Laura Cagnoni – winner of the Ladies Cup in the Citroen C1 Cup in Italy, in 2006. She won the ladies’ class in all but one of the races. After that, she does not appear to have competed much, although she co-drove a Porsche Cayman in the 2007 Mille Miglia, with Italo Fontana.


Martina del Castello – raced in the CITE in 2015, driving a BMW M3. Her co-driver was Roberto del Castello. Her best finishes were two fourth places at Pergusa, and she was tenth in the championship, alongside her team-mate. They were seventh in Division One. 2015 looks to have been her first season of racing. She is better known as a downhill skier. In 2017, she raced a BMW M3 in the Italian BMW Open Cup.

Katia Ciancabilla - raced in the Citroen C1 Cup in Italy in 2008. She was 21st overall. As well as competing herself, she is the team manager and press officer of the Scuderia Grifo Corse team, which competes throughout Europe, mainly in sportscars. She did some more C1 Cup races in 2010.


Luisa Croca – competed in the 1971 Italian Touring Car Championship, driving an Autobianchi A112. At the time, the series consisted of both circuit races and hillclimbs. Luisa only ever raced on the circuits, and did not enter any of the climbs. She normally finished quite well in her class, and her best overall result was ninth, in a Group 2 race for small-engined cars at Monza, near the start of the season. Monza appeared to be a favoured track for her. This looks to have been her only season of racing at this level, and almost no other information about her exists.


Carlotta Fedeli – raced in the CITE in 2015. Her car was a SEAT Ibiza, and she ran in the one-make section of the championship. She won the Junior and Ladies’ titles. 2015 was her third season in a SEAT: in 2013, she raced in the Cupra Ibiza Cup, and in 2014, the Castrol Cupra Cup. Both of these championships involved four-hour endurance races. She did a fourth season in a SEAT in 2016, racing in the Leon Cup. Her best result was a second place at Mugello, and she would have been a contender for a top-five championship result without a DNF and an indifferent round mid-season. This drive included guest appearances in the TCR International Series in Italy. She entered the Italian TCR championship again in 2017, driving an Audi RS3, but was disqualified from one race and did not finish the other. In 2013 and 2012, she also raced a BMW Mini in Italy, managing one podium in 2012. After a break, she returned to motorsport in 2019, racing a SEAT Cupra in the TCR DSG Endurance series. She was fourth overall with three third places. Her first year as a competitive racing driver was 2011, when she took part in the Italian production touring car championship, in the Mini. Before that, she was active in karting.

Angela Fontana - raced an Abarth 1000 TC in Europe in 1963, including a run in the Nürburgring 12 Hours with Attilio Zuppini. They did not finish. In the 500 mile race at the same circuit, they were twelfth, driving a Fiat-Abarth 1000 Berlina. In the Nürburgring 12 Hours of 1962, Angela drove yet another Abarth, a Fiat 700, with Fulvio Sestilli. They were 22nd and fourth in class. That year, Angela won two Italian GT races, at Monza, driving solo. Her car was a BMW 700. She also competed in hillclimbs in an Abarth.

Alexandra Gallo - raced GT and touring cars in Italy in the 1990s and 2000s. She drove an Alfa Romeo SZ in the Italian GT Championship in 1994, winning the GT4 class at Vallelunga. The same year, she drove an Alfa Romeo 33 in the CIVT touring car series, winning its Ladies’ award. She had been active in the championship since 1991. Later, in 2004, she drove a Jaguar in the Superstars series, alongside Tamara Vidali, an old CIVT rival. She also competed in the Maserati Trofeo Corse. She now works as a journalist and F1 broadcaster.

Stefania Grassetto - raced touring cars in Italy early in her career, competing in the Campionato Italiano Velocita Turismo between 1994 and 2001 in a variety of smaller cars. Her best result was a race win at Monza in 1998, driving an Opel Corsa. She was the ladies’ champion four times and entered the Six Hours of Vallelunga three times, winning her class once in 1996. After a year racing historics, she entered Formula Gloria in 2003, doing two complete seasons and winning the ladies’ award in 2004. In 2005 and 2006, she also raced in some rounds of the Maserati Trofeo, before returning to Formula Gloria. Another hiatus in the Italian Diesel Endurance Cup occurred in 2008, and she was fifth overall in a BMW 120d. She returned once more to Formula Gloria in 2009, and was fourth in her first race back. She returned to karting in 2010, as part of an all-female endurance team, then moved into historic racing, in a Porsche 911, in 2011. After that, she turned to racing Minis, first in the 2012 Mini Rushour series, then the 2013 Mini Challenge, in which she was 17th overall. She returned to historics in 2014, racing a Porsche 911. She now plays golf competitively.

Liliana de Menna - stalwart of the Italian touring car scene who was active from 1963 to 1994. She won a saloon championship in her first year of racing, winning nine races outright. Her car was a 600cc Fiat 500 Montecarlo. The following year she won Class 2 of the Coppa Carotti mountain race. Later in her career, she raced sportscars, including a Nissan 300ZX in 1992 and a Mazda RX-7 in 1994.

Francesca Raffaele - former karter from Italy who had her debut senior season in 2019, aged seventeen, racing in the Italian Clio Cup. She drove for the Oregon Team and her best results were a pair of sixth places at Vallelunga. Her final championship position was eleventh. She tested a single-seater in 2018 after a couple of seasons in European karting, but chose the one-make saloon series instead.

I've been taking a break from Speedqueens while getting on with other things for a while, but from now on, I'm going to be updating the blog again.