The finale of this year's World Rally Championship concluded on Sunday, and was won by Finland's Jari-Matti Latvala in a Ford Fiesta.

A couple of Speedqueens took part in the rally this year: Australian Molly Taylor, driving a Ford Fiesta with Seb Marshall, dropped out on Stage 17, which gifted the Ladies' Cup to Becky Kirvan, who was 39th.

Despite Molly's non-finish, she was still able to claim fifth in the WRC Academy class, after winning one stage.

Becky was co-driven by Will Rogers, and was also driving a Ford Fiesta.

In the National B event, the fastest female driver was Sara Williams, who was 17th overall. She was driving a Subaru Impreza, with Patrick Walsh.

Hazel Dunham was the daughter of Gerry Dunham, a gentleman racer who had competed in non-championship Grands Prix and many club races, sometimes in his own Alvis special. Hazel appears to have begun her motorsport career in a Rover, which could have been Gerry’s Rover Special, although it is unlikely. She did not share any of his other cars. The Dunham family were from Luton. Hazel was born in 1925, and took to motorsport when in her twenties.

Hazel competed in both circuit racing and rallying, achieving some success in both fields. She really put herself on the rally map in 1952, winning Coupes des Dames on the Tulip and RAC Rallies, driving the Rover. Her first award, on the RAC Rally, was in the Closed Car class. Her second was an outright ladies’ trophy. It is possible that she entered some British events prior to this, but the results are not forthcoming.

The Tulip Rally was probably her best event, and she entered it five times, between 1950 and 1954. One of her most frequent co-drivers was Charlotte Sadler, who was a racing associate of her father's from the 1930s, when she competed at Brooklands as Irene Schwedler. They drove the Rover together between 1950 and 1953, always as part of a three-woman team. It was Charlotte who helped Hazel to her 1952 Tulip Coupe des Dames. They were 31st overall.

She continued to rally the Rover in 1953, and is listed as an entrant in the Monte Carlo Rally, although she did not win any awards this time, and may not have finished. In the spring, she had driven the Rover in the Tulip Rally again, with Mrs. Armitage and Mrs. Howard as co-drivers.

The following year, she seems to have switched to an AC, and crashed out of the Stella Alpina. This appears to have been her last major rally.

In 1955, she moved from the stages to the circuits, driving an AC Ace that may have been the same car she rallied in 1954. She entered three races at Goodwood, all Ladies’ events. Her results were a third and two seconds, against tough opposition in the form of Jean Bloxam, Nancy Mitchell and Patsy Burt.

The following season, she continued to base her activities around Goodwood. The AC had now been exchanged for an MGA. Her first race, a ladies’ handicap, gave her a cautious fourth place, but her first big mixed handicap, later that day, led to a runner-up spot behind Mike Sleep. These positions were repeated in her next meeting, in July. After that, she ventured across to Crystal Palace in August, where she was fifth in an Invitation Handicap, and second in a Ladies’ Handicap, behind Jean Bloxam, a close contemporary.

Hazel’s last recorded outing is at Goodwood in September of that year. She was third in a mixed handicap and won her first Ladies’ race, ahead of Beatrice Naylor in her Lagonda.

After that, Hazel’s name vanishes from the entry lists. Her father retires at around the same time. It is not known whether Hazel retired completely, or married and continued to compete under another name. She was rather an enigmatic driver, and no reliable, widely available photographs exist of her. Although her career was rather short, she showed considerable skill and deserves to be remembered.

She is known to have worked as a physiotherapist in her local hospital, specialising in treating children.

This short biographical post is a work-in-progress. If you have any information about Hazel, please get in touch.
Posted by Rachel H-G at 14:25 No comments: 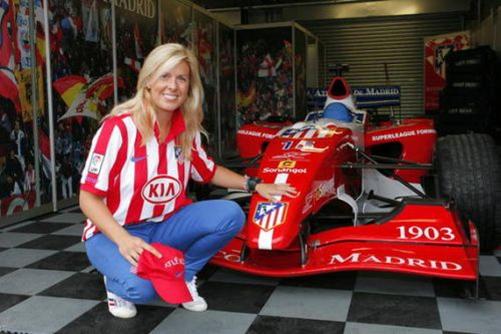 María de Villota was born in Madrid in 1980, the daughter of Emilio de Villota. From the ages of sixteen to twenty, she raced karts in Spain, after having won the first race she ever entered.

Her first experience of senior motorsport came from Formula Toyota in Spain, in 2001. She apparently won at least two races, at Albacete and Valencia, although the details are not forthcoming.

After a year of learning the ropes, she drove in the Spanish F3 championship between 2002 and 2005. During her first season, she was tenth, and thirteenth and twelfth positions in 2003 and 2004 must have been something of a disappointment. Both years, her best finish was fifth, earned at Jerez and Jarama respectively. In 2005, she switched down to the Copa España, and only drove in the first two rounds at Jarama, scoring a twelfth and a DNF.

After that, María left single-seaters for a while. Her main activity in 2005 appears to have been the Trofeo Pirelli Ferrari Challenge in Europe. Her car was a Ferrari 430, and she was part of the Baron Motorsport team with Tamara Vidali. The two shared a car for part of the season. Results for this series are rather fragmented, but Maria and Tamara were eighth and ninth in the championship, following some solid results. Away from Europe, she also drove in that year’s Daytona 24 Hours, with Luca Drudi, Luis Monzon and Gabrio Rosa. They were 24th in a Ferrari 360 Modena.

María continued in the Ferrari Challenge in 2006, and she managed a pole position at the final at Mugello, plus at least one top-five finish. She was eleventh overall.

In 2006, she made her first World Touring Car appearance, driving a Maurer Motorsport Chevrolet Lacetti. Driving for the Valencia meeting, she was 21st in her first race and did not finish the second. She repeated this exercise in 2007, finishing eighteenth and twentieth.

A major part of her 2007 season was taken up with the ADAC Procar championship in Germany, driving the Maurer Lacetti. Here, Maria fared much better, with a win and seven other podiums, out of fifteen races. She was third in Division I. Ferraris had not been forgotten either; she drove a 360 Modena in six rounds of the Spanish GT championship for Playteam. Her best position was a fourth at Estoril, although she only managed 21st in the championship.

2008 was another mixed year. Returning to single-seaters, she drove one race in Euro F3000, finishing seventh at Spa. She also raced in the Italian Superstars Championship, in a Chevrolet Lacetti. Her results have not been forthcoming.

At the beginning of 2009, she took a step down to contest Formula Palmer Audi in the UK. She was not one of the frontrunners, and only managed 22nd, due to quitting the championship after three rounds. Her best finish was seventh, at Silverstone. However, other opportunities came up, which she took. A guest spot in the Fiat 500 Abarth Trophy led to two retirements at Valencia, but more drives came her way.

Elsewhere, she competed in the Atletico Madrid car for the Superleague Formula. Her best finish was seventh at Jarama, and she was fifteenth overall, after three rounds.

The following season, she remained in Superleague, and improved her best result to fourth, at the Nürburgring. She also managed two other top-ten finishes at Magny-Cours and Brands Hatch: a sixth and a seventh.

Mid-season, she made a return to the Spanish GT Championship, for the Jarama and Albacete meetings. Her car was a Ferrari 430 GTS. At Jarama, she was third, and at Albacete, third and second. This was enough for seventh in the championship

In 2011, she stayed with the Superleague Formula. Atletico Madrid retained their entry, despite smaller grids and many more teams running as “national” rather than sports club concerns. Atletico Madrid only entered two rounds, Assen and Zolder, and were left in second to last place in the standings. Maria only managed a twelfth place, having crashed out in qualifying at Assen.

The big news this year was that María tested a Formula One car for the first time. In August, she drove a Lotus-Renault F1 car at Paul Ricard, in a serious test. The results have not been made public. Shortly afterwards, she did some demonstration laps in another Lotus at the World Series by Nissan meeting at Montmelo in October.

She did not get the Lotus seat, but she was signed up by the Marussia team on a multi-season development deal. She was set to start as a non-racing test driver, with a view to being eventually considered for a race seat.

Unfortunately, her first test for Marussia, at Duxford airfield in England, at the beginning of July, ended in disaster. Maria's car collided with a stationary transporter, and she received serious head injuries. The full details of the crash have never been circulated, but it is known that Maria lost an eye as a result. She did not race again.

In 2013, she made some public appearances, promoting an autobiography and taking part in some FIA commission activities. Sadly, she died suddenly on October 11th, aged 33.

(Image from automobilsport.com)
Posted by Rachel H-G at 16:11 No comments: