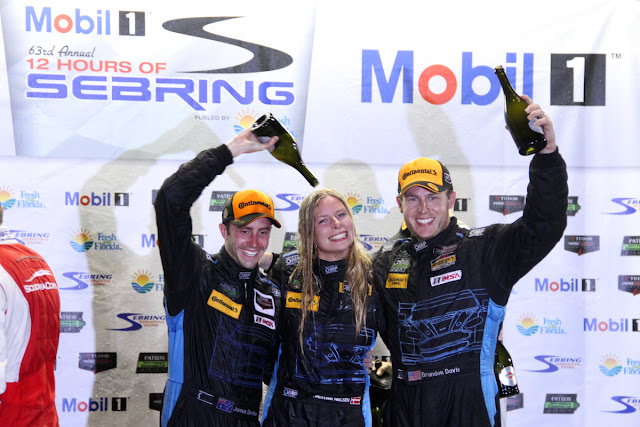 Christina and team-mates on the Sebring podium, 2015

Christina is a Danish driver who had her debut single-seater season in 2010. She now competes in sportscar racing, with considerable success.

Although she comes from a motorsport background, she did not get her first taste of racing until she was fourteen, when she tried karting for the first time. A competitive international karting career followed, for the next four year.

After six races in 2010, she settled for ADAC Formel Masters in Germany, for 2011. Her best finish was eighth, at Assen, and she was 24th overall. Although her finishing record was good, she was not really able to make her way into the top ten.

In 2012, she made her first move towards sportscar racing, and competed in the Porsche Carrera Cup in Germany. She managed one top-ten, a ninth at the Nürburgring. In November, she began racing in the Middle East edition of the Porsche Carrera Cup, the first female driver to do so. She was eighth in the championship, with two fifth places, at Losail and Dubai. Mostly, she finished in the lower reaches of the top ten.

For the main part of the 2013 season, she competed in the ADAC GT Masters, in a Farnbacher Racing Porsche 911 GT3. She managed to inch into the top ten, in ninth, on two occasions, at Lausitz and Hockenheim. The last race of her season was a guest spot in the Petit Le Mans race, in another Porsche. She and her team-mates, Nicolas Armindo and Angel Benitez, were seventh in class, and 28th overall. She also drove a Farnbacher Porsche 997 in the Nürburgring 24 Hours, but did not finish. Her team-mates were Tomas Pivoda and Leh Keen.

At the end of 2013, she did another winter season in the Middle East Porsche Cup. She was eleventh this time, repeating her fifth place at Dubai Autodrome.

2014 was an extremely busy year for her. Driving a Porsche 911 in North America, she took part in the United Sports Car Championship and the GT3 Cup Challenge, in both the USA and Canada. She raced in the entire US GT3 Cup, and scored three podium positions, a second at Lime Rock and two thirds. She was sixth in the championship. Towards the end of the season, she made a couple of guest appearances in the Pirelli World Challenge, in the GT class, driving an Aston Martin GT3. She was 16th and eleventh at Sonoma. Back in Europe, and back with the Porsche, she drove for the French IMSA Performance Matmut team for three rounds. Her best finish was eighth, at Paul Ricard.

This season, she made her first attempts at the big classic sportscar races. Driving for the NGT team in the Tudor United Sports Car Championship, she was 28th in the Daytona 24 Hours, in the 911. She and her usual team-mates, plus fellow Dane, Nicki Thiim, were 28th, and ninth in class. The second round of the championship was the Sebring 12 Hours, and NGT entered a three-driver team, including Christina. She did not finish, due to an accident 61 laps in.

In 2015, she raced an Aston Martin V12 Vantage, mainly in the USA. She entered both the Tudor United Sportscar Championship and the Pirelli World Challenge. She did exceptionally well in the Tudor series, driving for the TRG-AMR team, and went in to the final round, Petit Le Mans, able to win the class championship. In the end, she was second, by two points, lacking the race win that the two victors had. That year, she finished her second Sebring 12 Hours, and recorded the best overall finish of her year: 16th. She was second in class, driving with James Davison and Brandon Davis. They started from 32nd on the grid. This was one of four seconds Christina achieved this year, the others coming at Belle Isle, Road Atlanta and Virginia.
She did most of the Pirelli series, and did manage a class win in the eleventh round, although she was not able to challenge for class honours.

At the end of 2015, it was announced that Christina would be part of the squad for Formula Racing’s Le Mans and ELMS programme, driving a Ferrari. She was down as a reserve driver for the team before the 2015 race, but did not make the start.

She finished Le Mans in 35th place, with her Danish team-mates, Johnny Laursen and Mikkel Mac.

The Le Mans finish was an achievement, but it almost paled in comparison to the rest of her year. In the summer, she won the GTD class in the 12 Hours of Sebring, finishing 22nd overall with her team-mates, Alessandro Balzan and Jeff Segal, from the Scuderia Corsa team. Her Sebring win was followed up with another class win at Watkins Glen, plus two second and three third places, on her way to a GTD class win in the IMSA Weathertech Sportscar Championship. This was a first for a female driver.

A part-season in the ELMS with Formula Racing was not as spectacular, but was still solid. Driving their Ferrari F458, her best finish was fifth, at Silverstone.

Her services at Scuderia Corsa were retained in 2017. Christina ended the year as a double GTD champion in the IMSA Weathertech championship, with one class win and seven podiums. Her regular co-driver was Alessandro Balzan.

Christina and Alessandro teamed up with American Bret Curtis for Le Mans. They got to the end of the race in 44th, 14th in the GTE Am class.

For 2018, Christina moved on to Wright Motorsports and their Porsche 911. She contested the IMSA Weathertech series with Patrick Long and they were seventh in GTD, with one win at Road America.

Away from IMSA, she kinked up with the Italian Ebimotors team for Le Mans. She drove a 911 with Erik Maris and Fabio Babini, finishing 31st overall and sixth in class.

2019 began with a run at the Daytona 24 Hours, driving for an all-female Acura team. The Meyer Shank squad was led by Jackie Heinricher, who was unable to race herself, and sponsored by Caterpillar. Christina was joined by Bia Figuereido, Simona de Silvestro and Katherine Legge. They limped to the finish with a crash-damaged car following a race that was shortened due to bad weather, but had led the class for part of it. Christina continued to be part of the team for most of the year, picking up a best finish of fourth in class at Watkins Glen.

Ever on the move, she spent most of the season racing in Asia. She drove for Craft Bamboo Racing with Darryl O'Young in the Blancpain GT World Challenge, in a Mercedes AMG GT3. They were seventh in the GT3 Silver class, with second places at Sepang and Fuji and another third at Sepang.

A mid-season stint with Strakka Racing in the Intercontinental GT Challenge was less successful. Despite being in a similar car, Christina only earned one tenth place at Laguna Seca.

On a sojourn to Australia, she raced another Mercedes in the Bathurst 12 Hours with Mark Griffith and Yelmer Buurman. They were fifth in class.

At the end of the year, she was invited to India for the inaugural X1 Racing League series. She was drafted in as AD Racing Delhi's compulsory female pro but left before the racing started as her car was not running. She was replaced by Mira Erda.

Her 2020 plans involve another crack at IMSA in an all-female team, this time run by Grasser Racing. Their car is a Lamborghini Huracan.

Her father is Lars Erik Nielsen, who raced at Le Mans. Both father and daughter now joke that Christina used to be known as Lars Erik’s daughter, now Lars Erik is known for being Christina’s father.

(Image from http://katyfairman.blogspot.co.uk/2015/03/MariaTeresaDeFilippis.html)
Posted by Rachel H-G at 02:53 No comments: