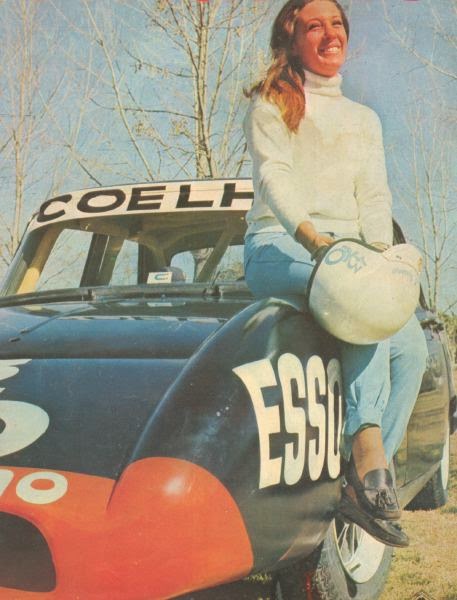 Dora Bavio raced touring cars in Argentina in the 1960s and 1970s. She began racing in a Renault Gordini, and favoured French cars throughout her short career. The Gordini, her first racing car, was a gift from her father, although intended for road rather than competition use.

She was born in 1942. Unusually for her time, she actually began her motorsport career in karting. Her first car race was in 1966, at Vuelta de Lobos. She was sixth in class in the Gordini. Her next race was two weeks later, at the Autodromo Buenos Aires, and she was third.

Things went rather quiet for “Dorita”, as she became known, after her promising first year. She disappeared from the circuits for a while.

In 1970, she entered the Argentine national touring car championship, driving a Peugeot 404 in the Improved Touring class. She drove in seven events, and had a best finish of eighth, in her first race at Salto. At least some of these races were two-driver enduros; Susana Renzulli was among her co-drivers. Her last event of the year was the Argentine Touring Car Grand Prix, which she did not finish, stopping after the third stage.

In 1972, she raced a Peugeot 504 in the championship, but only did one race, which she did not finish. In between races, she worked as a racing instructor.

Much later, in 1985, Dora reappeared on the rally stage. She took part in the Rally of Argentina, driving a Peugeot 504, and was 39th overall. The car was considerably older than most of the field, but not the only 504 in the rally.

She may also have driven in the 1995 Rally Argentina, in a Suzuki, but the result is proving hard to track down.

After her retirement, Dora ran an auto accessories firm for many years.

Patricia McOstrich was a regular at Brooklands between 1930 and 1939. She was an all-rounder who drove in trials, rallies and races.

She was born Gladys Patricia McOstrich in 1898. Her family was based in Surrey, quite close to Brooklands. It was probably during WW1 that she learned to drive; she described herself as a servicewoman who drove ambulances. After the Armistice, she worked as a chauffeur for a Liberal politician and advertised her services in the papers. This was sometimes done under the banner of female emancipation. Throughout her life, she attempted to encourage other women into the automotive world.

Her first major competitive outing was the JCC’s Half Day Trial in 1930. The trial was held at Brooklands. Patricia drove an Alvis and won a first-class award. In 1932, she entered the JCC’s Open trial in an MG Midget and received a second-class award for her performance in the under-1100cc class.

It was this year that she started racing on the Brooklands circuit itself. The MG had been exchanged for a Talbot, which she seems to have owned jointly with a Miss Hedges. This woman, who raced herself at Brooklands, was probably Grace Hedges. The two were pointedly described by the press of the time as “good friends” and may have been in a romantic relationship.

Patricia raced the Talbot between 1932 and 1934. It was not the most competitive of her cars, but she did manage a second place in the Second Walton Scratch Sprint at the 1934 March BARC meeting.

In keeping with her feminist ideals, she was a member of the Women’s Automobile and Sports Association. She took part in their one-lap handicap race at the 1932 Brooklands Guys Gala. The following year, she was part of their official team for the Stanley Cup, alongside Lotte “Irene” Schwedler and Margaret Allan.

Of all of the racing cars she drove, she got the best results out of a Frazer Nash. Her first event in it seems to have been the March meeting at Brooklands. In May, she was third in a ladies’ race at Donington Park with it.

By 1937, she had really got to grips with the Frazer Nash. she started the year by winning a Ladies award in the Brooklands Rally. Then, she won the Second Easter Long Handicap, as well as finishing second in a Sports Handicap at Crystal Palace.

In 1937, she was also part of a Frazer Nash team for the JCC Relay. They finished in seventh place. Kay Petre was part of the winning Austin team.

After that, she carried on racing until 1939, but was not quite as successful. She competed in several trials and won some awards, but there were no more race wins. After the war, she did not return to the circuits or the rally stages.

Patricia ran her own garage business, Speedy Transport and Garages, away from the track, and contributed the motoring section to the book “Careers and Vocational Training: a guide to the professions and occupations of educated women and girls”. In it, she discussed the merits of working as a “chauffeuse”, which she warned was often combined with more domestic work or a companion role, and advised on how to start a garage. She gave rough budgets for a filling station or a repair garage. “Motor racing as a career cannot be recommended except for those with plenty of money and where earning a living is not the object” was what she had to say on professional motorsport. 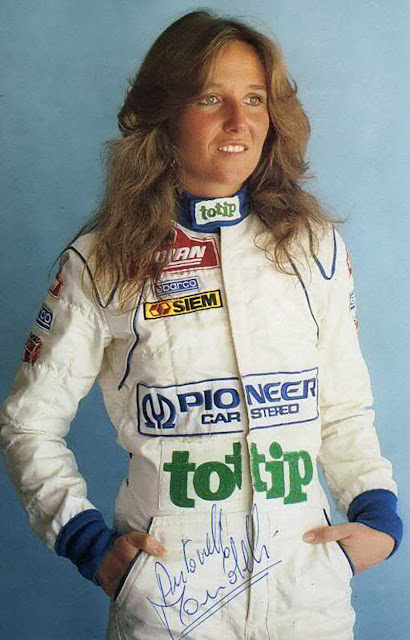 Antonella Mandelli was the 1981 European Ladies’ Champion. She was part of the Aseptogyl team early in her career, although she was more associated with the Jolly Club squad.

Antonella was born in the affluent Como region of Italy.

Her earliest major rally seems to have been Sanremo in 1977, when she was 23. She drove an Opel Kadett, but did not finish. The same car was used for the Rally Sangiacomo, also in Italy, but the results are not forthcoming. Her co-driver was Iva Boggio.

This drive got her noticed, and she was picked up by Fiat. Jolly Club were running their rally operation. In October 1978, Antonella tried Sanremo again in a Fiat 131. The car broke a driveshaft and she retired. Shortly afterwards, she became part of a six-car Team Aseptogyl, driving a smaller Fiat 127. Antonella was one of three Italian drivers, with Maurizia Baresi and Anna Cambiaghi. The other three were the experienced Frenchwomen, Christine Dacremont and Marianne Hoepfner, and Joëlle Chardin. They got an entry for the Tour de Corse, but Antonella had to drop out with an oil leak. None of the Aseptogyl cars finished.

She spent the next season in the 131, which was becoming one of the most competitive cars of its time, in the hands of Walter Röhrl and Markku Alen. It was an unforgiving car; Michele Mouton also drove one, and never liked it, despite winning two events in it. Antonella’s best result that year was an eighteenth place in the Targa Florio Rally.

The 131 finally came good for her in 1980, when she scored her first podium finish. She was third in the Rally delle Valli Piacentine.

In 1981, she travelled to the Iberian territories with Jolly Club and the 131. She was rewarded with second place in the Madeira Rally. This was a really tough event, with only 17 finishers from 69 starters. Antonella was ahead of her Jolly Club team-mate, Adartico Vudafieri, who won five rallies that year.

A one-off drive in an Alfa Romeo Giulietta in Spain was not as successful; she crashed out of the Rally Costa Brava. She did use this car in Italian rallies, but this was her only international outing in it.

She ended the season as European Ladies’ Champion, ahead of Michela “Micky” Martinelli of Switzerland. Her other results do not seem to be widely available. Micky could not catch her in the Italian championship, either.

The 131 remained her car of choice for international rallies in 1982. She entered six ERC events, and finished in the top ten in five of them. The best of these was a seventh place in the Costa Brava Rally, which made up for her disappointment in 1981. The Madeira Rally continued to be one of her strongest events, and she was eighth this year. Her other top-tens were eighth places in the RACE Rally and Rally della Lana, and a tenth spot in the Rally 4 Regioni.

In the Italian championship, she was already trying out the newer Lancia 037 Rallye, also run by Jolly Club. She was Italian ladies’ champion at the end of the year.

She drove a Lancia 037 Rallye for Jolly Club in the 1983 European Championship. Again, Madeira was her lucky rally, and she was third. She was 18th in the Ieper 24 Hours, supporting team leader Miki Biasion, and was becoming very familiar with the powerful, Group B 037 when she had a big accident in Spain. It was during the Sol RACE Rally and she and her co-driver Tiziana Borghi were unharmed, although the car was written off. This followed an exclusion from the Costa Brava Rally due to problems at the finish.

1984 was another good season for her. Driving the 037, she repeated her third place in the Madeira Rally. Later in the season, she followed it up with a fifth in Catalunya.

This was her last season in rallying. Apparently, she married an heir to the Jack Daniels whiskey fortune and moved to the USA. She had earlier stated that she wanted to race at Le Mans and to enter the Dakar Rally, but this never came to fruition.

Antonella was clearly a very talented driver who had connections in the right places. If she had continued her career a little longer and competed more in northern Europe, she could have made a real impression on the World Rally Championship.