Jessica (centre) on the winner's podium in 2017

Jessica Hawkins was second in the John Cooper Mini Challenge in 2017. She was a multiple race-winner in her first really successful season, finally displaying the talent she showed in a kart.

As a junior, she won several karting championships, and featured strongly in some major ones.

In the face of a series of difficult sponsorship situations, she got onto the grid for the 2014 Renault Clio Cup. This was in part thanks to winning a testing shootout organised by the BWRDC, and was helped by some further experience in the car in the 2013 Autumn Trophy. In the end, she only seems to have driven in two rounds, at Brands Hatch, but she was third and fourth. Her team-mate was Jodie Hemming, recently returned to competitive action. Jodie was acting as her driver coach too.

Later in the season, she raced in the British Formula Ford Championship, at Silverstone, scoring two tenths, and an eleventh place. She was team-mate to Michael O’Brien, a fellow youngster.

In 2015, she chose the single-seater route, and entered the MSA Formula series. This was a transitional formula between Formula Ford and Formula 4, as it would become in 2016. It was a difficult season, and she just missed out on a top-ten spot at Rockingham and Snetterton. She was 23rd overall, after competing for just over half a season. She was part of a strong field, including Lando Norris, Dan Ticktum and Enaam Ahmed.

During the winter season, she raced in the MRF Challenge in the Middle East. She managed two fifteenth places at Bahrain. These were her only two races in the championship.

Part-way through 2016, she joined Team HARD Racing for the VW Racing Cup, and was ninth and eighth at Brands Hatch, driving a Golf. She did enter the third race at Brands but did not finish. This experience put her back on her original track of saloon racing, which would pay off.

Jessica’s first race in the 2017 Mini Challenge ended in a win from pole. She followed that up with another win from the front. She aimed for a clean sweep of the Snetterton meeting, but had to settle for third in the third race. She repeated this exactly at Silverstone: two wins, two poles, then a third. She won one more race at Rockingham and earned a further six podium places from eleven races. She could have won the championship if her early momentum had lasted, but she was still a strong second in what was her first full season of competition.

Her sights are now set on a career in tin-tops and she has completed the first year of a three-year plan, which will take her into the BTCC.

This plan had a slight setback in 2018, when she did not race very much, apart from a couple of guest appearances in the Milltek Sport Volkswagen Racing Cup at Snetterton. She spent most of the year working as a stunt driver.

In 2019, she returned to single-seaters, applying successfully to enter the female-only W Series. She sometimes found herself mixed up in on-track accidents during the season itself and had a best finish of seventh, at Assen and Brands Hatch. She was eleventh in the championship and therefore invited back for 2020.

(Image from www.excelr8motorsport.com)
Posted by Rachel H-G at 14:19 2 comments: 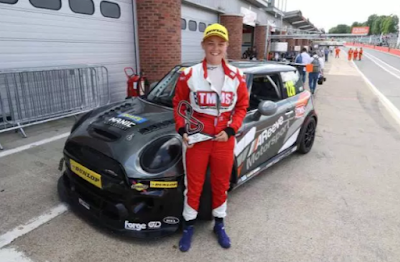 Sarah with the John Cooper Mini

Sarah Moore made history in 2009 by winning the Ginetta Junior championship outright. She was the under-17 series’s first female champion. She has since gone on to race saloons and sportscars in the UK and Europe.

She completed her first season of the Ginetta Junior series in 2008. She managed to finish in the top ten six times, with a best result of sixth. This followed a part-season in 2007, when she was fourteen. As well as full-size cars, Sarah also raced karts.

Her championship-winning season included five wins, making her the first female driver to secure victory in a TOCA-sanctioned race. She was awarded a BRDC Rising Star at the end of the year.

She returned to the series in 2010 for a final year, but did not manage another win. She was seventh overall. This year, she moved from her family’s team, Tockwith Motorsport, to Eurotech.

In 2011, after turning seventeen, she switched to single-seaters and raced in the Intersteps Formula, supported by Tockwith again. Her best finish was fourth, achieved twice at Silverstone, and she was sixth overall. Later, she described her foray into single-seaters as “difficult”.

She also did four races in the Smart 4Two championship, scoring two podium finishes. This was a new championship for the UK, based on the unlikely Brabus-prepared Smart micro-car.

She continued in the 4Two series in 2012, and scored a second at Spa and a two thirds at Snetterton. Her team-mate was her younger brother, David. They have another brother, Nigel, and all three pair up at various times.

A career hiatus followed. For a season, Sarah concentrated on her work as a driver coach, and only competed in karting. Even then, it was to help develop her student drivers.

In 2014, she was ready to race again. Alongside her brother Nigel, she travelled to Germany, to compete in the VLN, held on the legendary Nordschleife of the Nürburgring. She was racing in the Toyota GT86 Cup class. They won the class twice.

The pair aimed to return to the VLN in 2015, but it was not to be. Sarah kept her hand in by racing in kart enduros. She was the European ProKart Endurance Champion, with her team-mate Matthew Greenwood.

After another year spent mostly on the sidelines, Tockwith Motorsport entered Sarah into six rounds of the LMP3 Cup. She was driving a championship-standard Nissan-engined Ligier. If she had been able to complete the season, she would have been in line for a good position: she and co-driver Richard Dean were third at Donington and second at Spa.

As well as sampling prototype racing, Sarah continued to gain experience in different saloons. She entered five rounds of the UK Mini Challenge, all at Brands Hatch. She drove in both the Cooper Pro and JCW classes. Her best finish was fourth in the JCW car, in August.

Minis were a theme during her 2017 season. The intention had been for her to run a full season of the Mighty Mini championship. This was restricted to four rounds, but she won two of them.

The other cars she raced were a Smart ForFour, which she used for some rounds of the Britcar championship, and a Ginetta G50. The latter car she used in the BWRDC’s Ladies’ Handicap in November. She was the runaway winner on scratch, lapping almost all of the field twice. However, she was given a very low handicap, and was tenth in the final results.

In 2018 she drove a Ginetta in Britcar with Matt Greenwood. They won the Endurance championship in the Tockwith Motorsport G50.

2019 will involve another season in Britcar and Sarah also tried to get back into single-seaters in the female-only W Series. Her season started well enough and she led during the first race at Hockenheim, but she could not get onto the podium and had a best finish of fifth, at Hockenheim and Zolder. She was eighth in the championship and will race again in 2020.

In mixed competition, she entered the Algarve round of the GT4 South European Series, driving a Ginetta G50 run by Tockwith. She and Moh Ritson were second in class in both races.

Her future plans are in the sportscar direction, with Le Mans a career goal.