Circuit Racers in the Gulf States and the Middle East 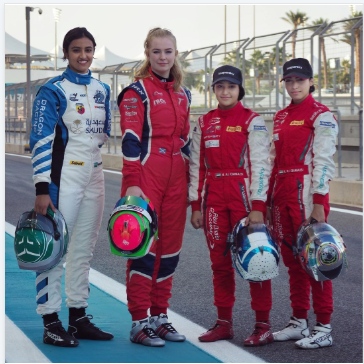 The motorsport scene in the Gulf States and the Middle East has only recently opened up to female drivers. In the case of Saudi Arabia, women only gained the right to hold driving licenses in 2019. Reema Juffali is the first Saudi female racer.

Other countries have a more liberal policy and have a longer history of female motorsport competitors.

Noor Daoud – racer and drifter from Israel/Palestine. In drifting, she competes all over the Middle East, in a BMW. She has also been active in mostly unofficial circuit racing in the West Bank since 2010, and is one of the “Speed Sisters”, a group of female racers from Palestine who have had a film made about them. In 2011, she raced a Formula Renault in the first legal Israeli race meeting, Formula Israel, in Eilat. She was third in a women’s race, and may have won another. Noor was born in the USA, and is a former international footballer for Palestine.

Martyna al-Qassab - Polish-born driver who races in her adopted country of Bahrain. She races in the Bahrain 2000cc Challenge and is the first female driver to do so. Her first car was a Renault Clio, which has now been replaced by an Acura DCS. She was fourth in the first round of the 2019-2020 championship. The previous year, she was a leading driver in the Novice class, winning at least one race. She is the founder of a Bahraini women’s motoring organisation, Yalla Banat, which has attempted to hold the biggest-ever women-only track parade at the Sakhir circuit in 2019.

Hamda al-Qubaisi - Abu Dhabi-born driver who began her senior racing career in 2019, in Formula 4. She competed against her older sister Amna al-Qubaisi in the last rounds of the Italian F4 championship at Red Bull Ring and Monza. Her best finish was 21st at Monza. She did better in the UAE F4 race that supported the Abu Dhabi Grand Prix, qualifying third and finishing fifth in her first race. She ran into problems in the second and was eleventh. She will contest the UAE F4 championship over the wineter season and has already picked up second places at Dubai and Yas Marina, alongside a series of pole positions.

Farah al-Sabah – driver from Kuwait, active in sportscar racing in the Middle East. In 2015, she competed in the NGK Racing Series in the UAE, driving a McLaren GT Sprint with Leon Price, from South Africa. So far, she has recorded two class wins, at Dubai Autodrome. She also races karts in the UAE, in the Sodi World Series. 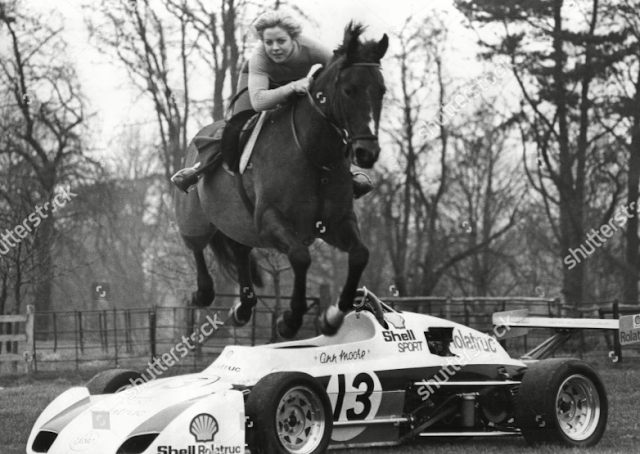 Ann leaps over her FF2000 car on Psalm


Ann Moore was a British showjumping champion who had a brief motorsport career in 1976, promoted by John Webb of Shellsport.

Ann won a silver medal in individual showjumping at the 1972 Munich Olympics, riding her horse Psalm. This made her the most successful of Britain’s female equestrians at a time when showjumping had a sizeable TV audience. She was voted the Sports Journalists’ Association Sportswoman of the Year in 1973, having been runner-up in the two years previously.

John Webb was the director of Brands Hatch circuit at the time. He was both sharp to the promotional value of female drivers and supportive of their abilities. He had one of his biggest successes the year before with Divina Galica, a former Olympic skier who would go on to attempt to qualify for a Formula One race in the same year that Ann Moore took the wheel. Ann’s public profile was far higher than Divina’s was due to the relative popularity of her sport. There was also a strong history of successful female drivers having first competed in equestrian events. Pat Moss was a showjumper like Ann, and another of the Webb protegees was Gillian Fortescue-Thomas, a former amateur jockey. The appeal to John Webb and his publicist wife Angela was obvious. Ann was signed up for what was referred to as the Webb “Charm School”.

The next phase of her career was a move into single-seaters. It was announced early in 1976 that Ann would compete in “around 30 races” that year in an Elden Formula Ford 2000 car, arranged by the Webbs and sponsored by Rolatruc. She made her debut at the start of the season with two races at Brands, then one at Mallory Park in March.

Among her events that year was a charity single-seater race in aid of a sports-related cause. Ann’s car, complete with her livery and name, is seen being used by boxer Joe Bugner for training.

The FF2000 car was perhaps not the best choice for a novice; Formula Ford 1600 may have been more suitable, or more outings in the Escort. Spectators of the time remark that Ann was slow and often spun her car. Her much-vaunted “professional” racing career came to a halt after only six races.

A statement made to the press explained that she had not realised how much of her time would be taken up by motor racing, and that she would only take part in occasional celebrity races in the future. It is not clear whether she did appear in any more of Shellsport’s celebrity races, which usually used Escorts, but they were held throughout the season and there would have been plenty of opportunity. 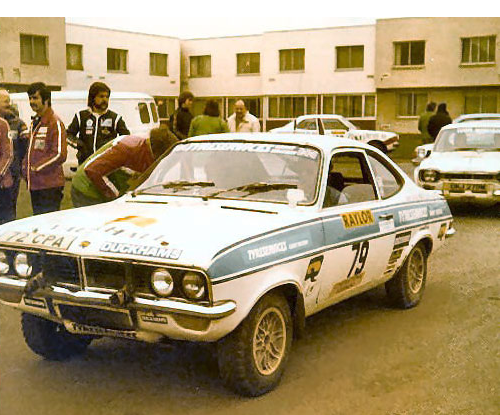 
Chrissie Ashford was Britain’s leading female rally driver in the mid to late 1970s, picking up two ladies’ championships in the later part of her career.


She rallied in the UK in the 1970s, starting as a navigator to her first husband, Paul, in around 1973. They competed together in road rallies. By 1974, she was driving a Vauxhall Magnum herself in Yorkshire club events.


Throughout her career, she favoured Vauxhall cars, including the Magnum, Chevette and possibly a Firenza. She enjoyed the long-term support of Tyreservices garages, a business which had a major depot in her home area of North Yorkshire. At some point, she worked as a fashion model and apparently appeared in Vogue magazine, which helped her from a promotional point of view.


She entered her first RAC Rally, in 1976, driving a Magnum with Tony Gilhome. They do not appear to have finished. Her second attempt in 1977, driving the same car but with Mary Fullerton on the maps, also ended in retirement.


Chrissie also raced on the circuits occasionally. She was invited to take part in the Shellsport Ladies’ Escort Race at Brands Hatch in August 1978, by the BWRDC and promoter John Webb. Against strong opposition including  former ETCC racer Susan Tucker-Peake, she was fifth overall. She also took part in sprints occasionally, including the 1977 Graham Hill Trophy at Curborough.


In 1978 and 1979, she was the BRTDA British Ladies' Champion. The second championship came after a break while she had the first of her four daughters.


1979 was probably her most successful year of competition. She drove a 2300 Chevette around the UK in rounds of the BTRDA and British National championships. Her best overall result was 25th on the Hadrian Centurion Rally, out of 94 finishers. She was also 31st out of the 84 recorded finishers on the Esso South West Stages.


Shortly after, she left rallying for family life and business interests, although she did make a brief comeback in 1983 when she entered the Lindisfarne Rally. She was 52nd overall in a Chevette.


After rallying, she concentrated on her business interests in the catering world, heading Danby’s Foods, a frozen-food manufacturer. She later worked with the Food Standards Agency. Her marriage to Paul Ashford did not last and she remarried; in the business world, she was known as Christine Dunn. 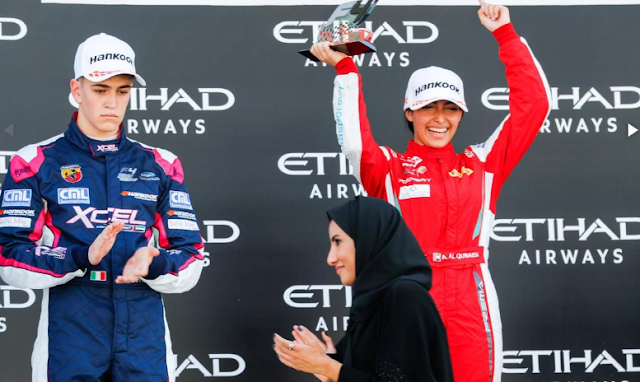 Amna (right) on the podium in Abu Dhabi

Amna al-Qubaisi is an Emirati single-seater driver who races alongside her younger sister, Hamda.

She made her senior racing debut at the start of the 2018 season after winning the 2017 UAE Senior Rotax karting title.

For her first season, she raced in Italian Formula 4 with Prema Powerteam, which has links to Ferrari. Her best finish was a twelfth place, fourth in the Rookie class, at Adria. She combined Formula 4 with karting.

At the end of the year, she was invited to test a Formula E car for DS Virgin Racing, as part of the female driver bonus test organised by the Saudi motorsport authorities. At around the same time, she was named as one of the 55 longlisted drivers for the initial W Series race season. By the time the driver assessment events came around in early 2019, she had withdrawn from the selection process for unstated reasons. It could be argued that a driver with a major sponsor like Kaspersky Data Systems did not need the W Series.

Another season in Italian F4 followed in 2019. She was driving for Abu Dhabi Racing this time and her results were broadly similar to before, with a 13th place at Mugello being her best.

At the end of 2019, she became the first woman from an Arab country to win an international single-seater race. Her victory followed a pole position and came in the non-championship UAE F4 Trophy, which supported the Abu Dhabi Grand Prix. Her sister Hamda, who started racing in F4 that year, was fifth. This is believed to be the first time that a female driver has won a mixed single-seater race during a GP weekend.

Amna and Hamda had previously done the last round of Italian F4 together earlier in the year. Hamda also races for the Abu Dhabi team.

Amna is the first Emirati woman to race at this level, aside from being the first to win. She is a citizen of Abu Dhabi although she was born in the USA and is currently a student in France. Before taking up karting at fourteen, she competed in gymnastics.

Her father is Khaled al-Qubaisi, who previously raced sportscars and won the Dubai 24 Hours twice.