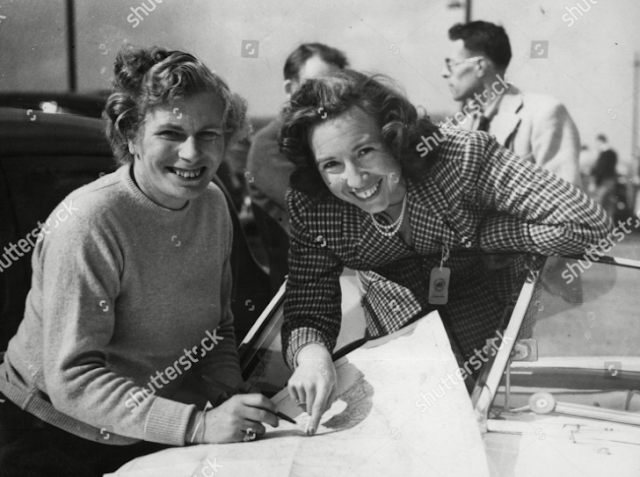 Lorna (right) with her co-driver Juliet Slatter in 1952


Lorna Doone Snow rallied in Britain and Europe in the 1950s. She was more known for her flamboyant style and social antics, but she was a very capable driver.

Her name first appears in connection with cars in 1941, when she was caught speeding in Wandsworth and fined 20s. She is reported by the Norwood News to have said “the time when traffic policemen frightened me is past,” suggesting that this was not her first misdemeanour.

Like many of motorsport’s more colourful characters, her background is rather unclear. Born in 1914, by 1942 she was the landlady of Ye Olde Six Bells pub at Billingshurst. While in this post, she fell foul of traffic police again when she was fined for “failing to immobilise her car during a blackout”.

By 1949, she was part of London society, appearing at a prizegiving for the Feathers Association.

Later, she was sometimes referred to as Lady Lorna Doone Snow (she did not have a real title) and she put her pub past behind her, if not her love of driving fast.

Her first big event seems to have been the 1951 Daily Express Rally, a long-distance trial, which she entered in a Jaguar XK120. Daily Express journalist Basil Cardew, who often championed female rally drivers, reported that she filled the washer bottles with brandy to provide “a stimulating odour”. Her car was also equipped with a makeup kit under its jaguar-skin seats.

In July that year, she set the ladies’ Fastest Time of the Day in the Ramsgate Speed Trials, also in the Jaguar. She was second in the Ladies’ class of the Brighton Speed Trials, behind Eleanor Allard.

In 1952, she is recorded as coming second in the Ladies' class of the Daily Express Rally, driving a Jaguar. She did her first overseas events this year, taking the Jaguar to the Tulip Rally with a G Meijer as her co-driver. She returned to this event in the same car the following year, finishing 103rd with “Mrs Tozzi”. Earlier in the year, she had entered the Monte Carlo Rally; her result is not forthcoming but it was reported in Motor Sport that her car’s luggage rack failed to stop when she did.

She took a “fastest lady” award in the speed test section of the 1953 RAC Rally, held at Silverstone, but retired between the circuit and Castle Combe.

The Scottish Rally was the scene of a more dramatic incident, recounted in Sheila van Damm’s autobiography. Lorna managed to collide with another competitor, damaging one side of her Jaguar. Sheila van Damm was soon on the scene and once she had ascertained that Lorna was uninjured and her car still mobile, demanded that she move it so that the rest of the field could continue. Lorna dropped her ladylike image for a moment and told Sheila to go away in rather coarser terms. She restarted and even made the time control in time.

It is not clear in how many Monte Carlo rallies she participated, but she was definitely part of a three-woman team in 1954 with Diana, Duchess of Newcastle and Reina Whittelle, who had partnered her in the 1951 Daily Express event. They were classified 267th in a Sunbeam Talbot. She reappears in the principality in 1958, this time as a driver, in a Morris. She does not appear to have finished.

In 1962, she hosted a party for lady drivers who had competed on the Monte, including Pat Moss-Carlsson, who had won that year’s Coupe des Dames in a Mini, Tish Ozanne, another 1962 finisher, and Kay Petre. The occasion was covered by the Daily Express and Lorna took great delight in telling the reporter that she had subjected all of her guests to a makeover, including matching curly hairstyles. Sheila van Damm, a good friend, was not spared this treatment.

The Hastings & St Leonards Observer talks of her entry in the Concours d’Elegance of the 1954 MCC Rally, which suggests she took part in the rally itself. In her own typical style, she would co-ordinate her outfits to her cars, particularly for concours events. One of her Jaguars was dark blue and white and she had a special outfit made to match it. Not content with jaguar seats in her rally car, she sometimes accessorised with a jaguar-skin coat or hat.

In 1958, she appears on the entry list of the Scottish Rally, driving a Jaguar Coupe.

Lorna also raced on the circuits occasionally. She was the winner of a 1955 Ladies’ Handicap at Goodwood in the Jaguar, ahead of Hazel Dunham and Jean Bloxam. She raced again at Goodwood in 1957.

As the 1950s gave way to the 1960s, she competed less, although she remained a semi-regular presence in the gossip columns, masterminding the social debuts and subsequent marriages of her two sons. She is still referred to as a rally driver, but she also appears to be working in the fashion industry.

She was involved in the creation of the "Golden Healey" show car, providing its fur seats.

Lorna died in 1998, shortly after marrying George Wheatley. She married several times during her life but chose to use the surname she shared with her first husband, Francis Snow, whom she married in 1934. Her family name was Turpie and Doone was her middle name.

Sheila van Damm sums her up in her autobiography, No Excuses:

“Flamboyant, even theatrical, she added a splash of colour to the rally world, although it was a mistake to underrate her ability as a driver. No-one took her seriously - least of all herself, for she has a wicked sense of humour.”

(Thanks to members of TNF, particularly Bill.)

(Image copyright Shutterstock)
Posted by Rachel H-G at 15:34 No comments: 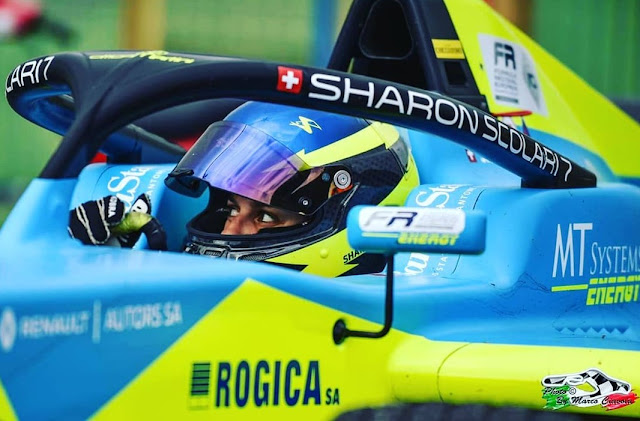 Sharon Scolari is a Swiss driver who races in the Formula 3 Regional European Championship.

Most of her racing career has been in the Lotus Cup in Europe.

She began her career in Legends in Italy, in 2011. As there is no legal petrol-powered motorsport in Switzerland and Sharon is an Italian speaker, this was a logical choice. She was fifteen years old, and won the Rookie class. Legends would be her racing home for three seasons. Her best finish in the overall championship was fourth.

Between 2014 and 2017, she raced a Lotus Elise, initially in the Italian Lotus championship. She was fifth overall. After a year’s break, she stepped up to the European Cup, and was thirteenth overall, third in the Open class. Her best results were three seconds and a third, and she secured her first class win in the last round at Le Mans. This was the end product of a difficult learning year that began with a non-classified finish at Hockenheim, through a first top-ten at Paul Ricard, a penalty at Brands Hatch for an incorrect start behind a safety car and her first class victory in the last race of the season.

In 2017, she raced in the Lotus Cup again, and was ninth, second in the Open class. She came close to an Open class championship, winning nine times, but had to settle for second behind David Harvey.

She raced in the Formula Renault Northern European Cup in 2018, for a part-season, and managed a best finish of second at the Nurburgring. She was eleventh in the championship; her results were better in the second part of her season. The year was interrupted by a crash at Spa, which put her out of the second Spa race and the Hungaroring rounds. It does not seem to have deterred her in any way and she came back stronger. Her team, ScoRace, was run by her family and was described by an onlooker as “her and a mechanic”.

At the end of 2018, Sharon applied to take part in the all-female W Series and was selected for the first assessments in January 2019. She did not progress beyond the initial stages and expressed her frustration on social media, claiming that she had been one of the fastest drivers on the final “Race of Champions” test and had not gone through. She also claimed that participants were prevented from knowing or sharing the reasons for their rejection.

Not long after, she put her W Series woes behind her and signed up for the Formula Regional European Championship, which uses the same Tatuus Formula 3 car. Her ScoRace team was partnered by the Italian Viola Formula organisation.

It was a tough learning experience, but Sharon posted her first top-ten finish at Paul Ricard, the first round. Her best finish, sixth, was also achieved at Paul Ricard. A couple of races sat out due to car damage did not help, but she remained hopeful and determined. She was 18th overall. 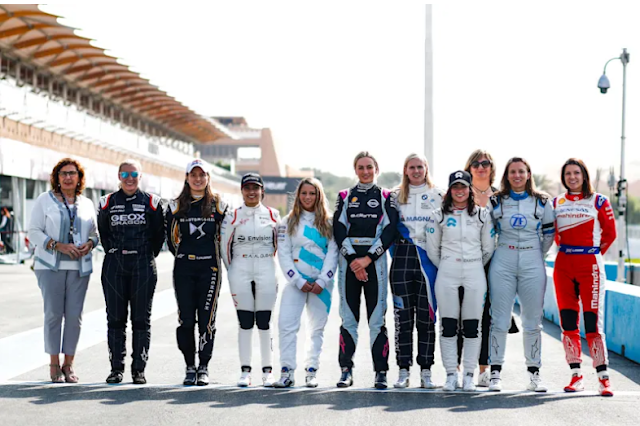 Thanks to the 2018 in-season test day that featured nine female drivers, Formula E has become somewhat associated with women racers. Carmen Jorda’s continuing association with the series, particularly the Nissan team, has helped this perception, even if her comments that Formula E cars are easier to drive for women than other single-seaters annoyed many.

The sad fact is that no female driver has competed in a Formula E race itself since 2016, when Simona de Silvestro picked up a few points for the Andretti team. This looks set to change in the near future, with Tatiana Calderon impressing in the in-season rookie tests and Jamie Chadwick building up a strong relationship with the NIO team.