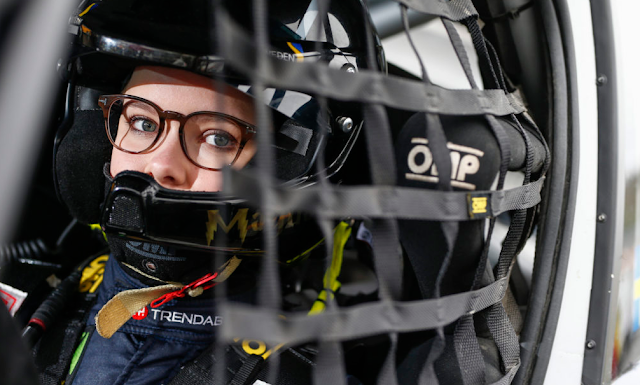 The Scandinavian nations produce many rallycross drivers and women get in on the action too, especially in the national championships.

My Adolfsson - rallycross driver from Sweden. She raced in the Swedish junior championship in 2014, in a Vauxhall Corsa. Her first race came when she was still only 16. Due to car problems, she did not complete all the rounds. She was fifteenth overall in the NGK Masters, after finishing second in one of her qualifying races, then suffering more car trouble. Previously, she competed in Folkrace, from the age of fourteen, and she still races on occasion, in the Women’s class. Her 2015 season in the Swedish rallycross championship was badly affected by a leg injury to My, who sat out part of the year following surgery. At the end of the year, she returned for the season finale, driving her Corsa. She is or was part of Ramona Karlsson’s Young Female Drivers mentoring project. In 2017, she took part in Folkrace events.

Magda Andersson – Swedish rallycross driver who competes in the European championships. She began her rallycross career in 2012, at the age of fourteen, when she was second in the JRX (Junior Rallycross) Cup. After a couple of seasons in JRX and in the Swedish championship, she started racing in the Touring Car class of the ERC in 2015. Her car was a Ford Fiesta. She made her first final in the second round of the championship, at Lydden Hill, finishing fifth. She was then second at Estering in Germany, and third in her home race of Höljesbanan, which gave her fourth in the championship. She returned to the Touring Car championship for 2016 and won the first round. She was second in the category overall. In 2017, she changed car and team, to a Marklund Motorsport-run VW Polo. She entered the Supercar class for the first time, but found it hard going. Her best result was a sixth place in France and she was 16th in the championship. She maintained her 16th place in 2018, although she was deducted some points for a technical infringement on her Peugeot 208 by her team, Dubourg Auto. Following sponsorship issues, she decided to take a year out in 2019.

Camilla Antonsen - winner of the North European Zone 4WD Championship in 2010. Her car was a Ford Fiesta ST. She has been competing on and off in the Norwegian championship since 1998, after some time spent in autocross and rallying. Between 2002 and 2004, she also made various starts in the Norwegian Touring Car championship, driving a Vauxhall Vectra. Her best results were two podiums in 2003, leading to a seventh place in the series. In 2011, she was second in the NEZ 4WD championship, as well as taking part in the Scandinavian rounds of the European Championship and the top-level Norwegian series. In 2012, she won the Supercar division of the Norwegian championship, in the Fiesta. She was also seventh in the NEZ 4WD championship, after winning the Norwegian round. She switched to rallying in 2013, in a BMW M3 and Renault Twingo. Rallycross was not forgotten in 2014. She raced a Ford Fiesta in the European championship, in the Touring Car class, for part of the year. She won one round, in Germany. In rallying, she competed in two Norwegian events, coming 19th in the Numedals Rally, in a BMW M3. 2015 saw her back in the European rallycross championship, in the Fiesta. She was eleventh in the championship. In rallying, she did two Norwegian events in the BMW. In 2016, she did a couple of rallies in the BMW, and at least one rallycross meeting, but a lot of her cars seem to have been sold. She rallied the BMW and a Subaru Impreza in 2017, performing best in rallysprints. Her best finish was eleventh in the Gardermosprinten. In 2019 she competed in rallies in her BMW, with a best finish of second in the Gardermosprinten event in Norway. This was one of three top-ten finishes in sprint rallies that year.

Susann Bergvall - Swedish rallycross driver who competed in the 1400cc class of the European Championship in the 1990s. She won the title in 1994, driving a Citroen AX Sport. In 1995, she was fifth, driving two different AX models. After that, she seems to fade from the racing scene, although she is known to have married Kenneth Hansen.

Pernille Brinkmann Larsen - competed in Danish rallycross in a Group N Citroen Saxo in 2018. This appears to have been her first season in the category, although it looks as if she did some folkerace events prior to her rallycross debut. She was eleventh in Group N in her first season, although she did not appear at all of the rounds.

Malin Gjerstad - began her career in Norwegian autocross in 2009, winning three of her events, plus the Ladies’ and Junior title. Driving a SAAB 900, she continued in 2010, venturing over the border into Sweden for their junior rallycross championship, in which she was fifteenth overall. She also continued with autocross, alongside her father Morten. After sitting out most of 2011 due to pregnancy, she returned in 2012, driving an Opel Corsa. Her one points finish in the Norwegian Class 1 championship was a fourth place, at Gardermoen Motorpark. She was twelfth in the 2013 championship, with one third place. She was driving the Corsa. She drove the same car in the 2014 Norwegian championship.

Ada Marie Hvaal - Norwegian driver who competes in both rallycross and stage rallying. She began in rallycross in 2012, when she was 14, finishing second in the JRX European Rallycross Series. Her car was a Citroen DS3. By the time she was 16, she was racing in the Norwegian WRX rounds in a Renault Clio, before moving up to the Super 1600 class in 2014 in a Peugeot 207. She has also competed in the Nordic series in a VW Beetle and a Citroen C2 in the European Rallycross Championship. On the rallying side, she began entering Norwegian rallies in a Ford Fiesta in 2018. Her best result has been 39th in the 2019 Rally Hadeland, driving a Renault Twingo.

Mathilde Lindrup - Danish driver who races a Honda Civic in her home country. She won the Danish Group N rallycross championship in 2018, with two final wins at Lovel and Ornedalen in the early part of the season. She was fifth in the same class in 2017. Mathilde began racing at fourteen in Folkrace events, using a Peugeot 306. She won the Danish championship for under-16s in 2016. She is from a rallycross family and competes alongside her brother Frederik.

Majbritt Linnemann - Danish rallycross driver who drives a Peugeot 208 or 106 in the Danish Super 1600 championship. She was third in the category in 2018, with a best finish of second at Korskro. During the year, the 106 had to be almost completely rebuilt after an accident, but she was able to resume racing. In 2019, it was back out and she was fourth in the Super 1600 class. She started in this car in 2017 with a part-season in the same class, although she raced a 206 for a couple of years previously. Majbritt is from a motorsport family and often competes against her brother Ulrik.

Lise Marie Sandmo - Norwegian driver who won the Norwegian Junior rallycross title in 2012, driving a Honda Civic, at the age of 18. She was the first female driver to do so. She was also fourth in the senior Northern European Zone 1600 rallycross championship, with a best finish of fifth. Her driving career began in 2010, in rallycross, and she was second in her first race. In 2011, she was fifth in the junior series, as well as competing in autocross at Junior level. 2013 saw her win a second Norwegian junior championship, as will as finishing seventh in the Northern Europe Super 1600 championship. Her car was the Civic. In 2014, she entered two rounds of the European Rallycross Championship, driving a VW Polo in the Super 1600 class. She scored one point. She drove the Polo in some rounds of the European S1600 championship again in 2015, but her season was marred by a pitlane accident involving her father. She did at least some NEZ championship races in 2016, but the results are proving elusive.

Fanny Thrygg - Swedish driver who has been driving in rallycross across Europe since at least 2005. 2005 was her first season in the European Championship, and she was 33rd in Division 2, driving a Peugeot 306. She was 32nd the following year, after finishing ninth in France. She did not do as well in 2007 and was only 35th. A string of final finishes pushed her up to 19th in 2008, still in the ageing 306. She was thirteenth in 2009, after three points finishes. As well as the European championship, Fanny also races in Sweden and makes appearances in other European events, although she does not seem to have competed since 2009.

Camilla Traerup - rallycross driver from Denmark. She has been active in the Danish championship since at least 2011 and has been racing for longer, having started in folkerace events in an Opel Astra in 2007. For most of her rallycross career, she has driven a Group N Honda Civic, in which she was second in class in 2017. Her car in 2018 was a Mitsubishi Colt. 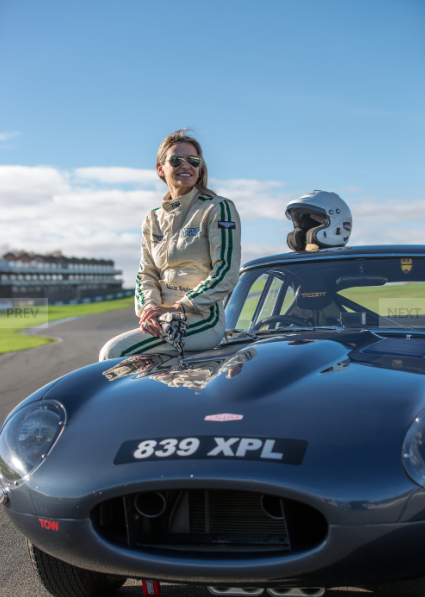 Katarina Kyvalova is a German-based Slovakian driver most famous for her exploits in historic racing, at the Goodwood Revival and as part of the Bentley Belles team. She took her first steps in modern motorsport in 2018, in the GT4 European Series.

Katarina has been active in historic motorsport since 2000, starting off in rallies in Germany before switching her focus to circuit racing. She still drives in classic navigational rallies on occasion, usually in a Jaguar E-Type.

On track, her first car was an Austin-Healey 3000 which she raced in the UK and Europe. She has competed at Goodwood, the Silverstone Classic and several VSCC meetings.

She is also part of the “Bentley Belles”, a quartet of female historic racers who drive Bentleys. They teamed up for the first time at the 2014 Benjafields 24 Hour race in Portugal, having only met each other in person the day before. The quartet were twelfth overall, in a Bentley 4 ½, having run as high as fifth. The team is involved in various Bentley-related rallies and races, and were third overall in the 2015 Spa 6 Hours historic race. In their individual cars, they raced in the VSCC Pomeroy Trophy in 2015.

Driving with Nigel Batchelor and others, she entered the 2016 Le Mans Classic in two different cars, the Bentley and a Jaguar XK120. She doubled up in these two cars again in the 2018 Classic, driving solo this time.

Her modern racing debut was at the wheel of a Mercedes AMG GT4. She raced in the GT4 European Series at Spa with Egidio Perfetti and secured a class third in her first event. She followed this up with a run in the 2019 Dubai 24 Hours, finishing ninth in the GT4 class with Jon Minshaw, Ryan Ratcliffe and Gabriele Piana. Their car was a Mercedes-AMG and they were 33rd overall.

During the 2019 summer season, Katarina got back in her Bentley for the Goodwood Revival, which held a celebratory race for pre-war Bentleys. This was her second Goodwood outing of the year in the car, which she also drove in the Members' Meeting in the spring.

That summer, she spent quite a lot of time racing the E-Type. She was fourth in class in the Spa Six Hours Classic and entered rounds of the Sixties Endurance series at Spa and Dijon. The Cooper came out again for the Greatest and Peter Collins Trophies and she even managed to fit in a couple of events in a Porsche 911.

Her second attempt at the Dubai 24 Hours was cut short by a flooded track, but she had joined up with Ciceley Motorsport in a Mercedes, with Jon Minshaw, Adam Morgan, Jake Giddings and Jack Butel. They were sixth in class when the race was officially stopped at the seven-hour mark.