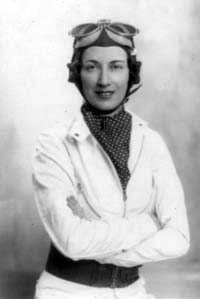 Joan was an Australian race and rally driver. Born in 1905, she began her motoring adventures in trials and speed events in 1926, driving a Citroen. Early in her career, she was fifth in the 1931 Australian Grand Prix at Philip Island, driving an Austin Seven. She also drove a Riley 9 during her time on the Australian circuits.

Her first rally was Monte Carlo in 1932, again, driving a Riley. This was her first introduction to European motorsport, and she did not take the easy route in. Joan and some other competitors took Australia as their start point, and drove overland all the way to Monaco, for the start of the rally. She was 17th overall. Still in the Riley, she drove in the RAC Rally later in the year.

That year, Joan achieved considerable fame by winning the Brooklands 1000 Mile race with Elsie Wisdom. The duo were driving a Riley Brooklands, and lapped the circuit at 90 miles per hour. The BARC, the governing club, had only just permitted female teams to enter their events, and Joan and Elsie were the circuit’s first major female winners.

In 1933, Joan purchased a 3000cc Ballot from 1921, previously raced by Malcolm Campbell. Although she impressed onlookers with her handling of the car, it was unwieldy and unreliable, as well as being out of date, and she was not able to challenge for victories. Never one to take the easy way out, she persevered with the Ballot for two seasons, but did not achieve anything notable. It was sold in 1935. The Riley was retained for rallies, and gave Joan a thirteenth place in the Light Car class of the 1933 RAC Rally, navigated by Kay Petre.

Joan’s next car was a Triumph, which she used in a JCC relay event at Brooklands. Later in the year, she drove a Frazer Nash in a Ladies’ Mountain Handicap, and was second. In between, she made the trip to Le Mans with Eveline Gordon-Simpson, as part of the “Dancing Daughters” MG works team. Their car was a P-Type and they were 24th overall, the first “Daughters” car home.

In 1936, it was back to competing at Brooklands in the Triumph. She also entered the Tourist Trophy in Ireland with Francis Monkhouse, but did not get to drive their Aston Martin. As well as her circuit-based activities, she attacked the rally calendar with relish, tackling the Monte Carlo, RAC and Scottish rallies, as well as the Land’s End Trial. In the Triumph, she was third in class in Monte Carlo and won her class in the RAC.

The Triumph too was sold for the 1937 season, and Joan did some Brooklands events in an HRG. However, this car was not quite up to the fast-advancing standards of modern racing vehicles, and she was not terribly competitive. Back at Le Mans, she fared better, sharing Bill Bilney’s Ford Ten and finishing fourteenth. She and Bill were an item at the time, although the relationship was short-lived, as he was killed in an accident later in the year at Donington. Joan was his co-driver, in her own AC. Her involvement with motorsport continued, but on a lesser scale than before, up to 1939. She is recorded as a finisher in the 1938 Imperial Plate at Crystal Palace, driving a Frazer Nash. Throughout her career, she drove in trials and speed events, and in 1937, she teamed up with Robert Waddy to drive his twin-engined “Fuzzi” special. She was third in class at Shelsley Walsh, but could not catch Kay Petre for the Ladies’ Record.

During the war, Joan worked in aircraft manufacturing, like many of her contemporaries. After peace was restored, she did not return to motor racing, and settled once more in Australia, where she died in 1999.