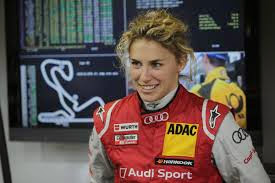 Rahel is a single-seater driver from Switzerland, who has recently branched out into top-line sportscar racing. Born in 1986, she began karting in 1998, aged twelve. Between then and 2004, she competed in both national and international events. In 2004, she moved on to cars.

Her first experience of full-size racing came in the Swiss Formula Renault 2000 championship. She was on the pace straight away, finishing fourth overall at the end of the season, defeating her future team-mate Cyndie Allemann, and future Formula One driver Romain Grosjean.

She was third in Swiss Formula Renault 2.0 in 2005, with two wins. In addition to this, she scored a further six podium positions, meaning that she was only out of the top three for one race. Four starts in the German Formula Renault series with Equipe Bernoise gave her an additional pole position, but no more wins.

2006 saw her make a double - pronged attack on the Italian Formula Renault championship, and the more competitive Formula Renault Eurocup. Success did not come as easily as it had in the Swiss series, and she was only joint 21st in the Eurocup, with eight points. She did slightly better in Italy, finishing eighteenth, with 24 points. Her Jenzer team-mate Dani Clos won the championship.

She made a sideways move into International Formula Master in 2007. Her best Formula Master finish was fifth, at Brno, and she entered the top ten six times. However, a series of retirements, and less impressive results, meant that she was seventeenth overall. In 2007, she was also part of the Swiss A1 GP team, but acted as a reserve driver, and only drove the car in test sessions in Malaysia.

In 2008, she joined the German F3 Cup and was fourteenth overall. She finished in the top ten six times, with a best finish of sixth, at Oschersleben. Driving the same car, but for Jo Zeller Racing, in 2009, she fared much better. She won one race, at the Nürburgring, and achieved further podium finishes at Hockenheim, Oschersleben and the second Nürburgring race. For the whole season, she was only out of the top ten once, and she was seventh overall.

In 2010, she raced at Le Mans for the Matech team, driving a Ford GT with Cyndie Allemann and Natacha Gachnang. They did not finish after their car caught fire, losing them too much time. Prior to this, she had also raced for Matech in one Le Mans Series race, and two rounds of the FIA GT1 World Championship, as a replacement for the injured Natacha Gachnang, who broke her leg early in the season. In the GT1 series, she was a disappointing 18th and 22nd at Brno, previously a track at which she had performed well. In the Le Mans Series, Rahel, Cyndie and teenage Swiss male racer Yann Zimmer were a more competitive third, at Spa.

As well as this, she took guest spots in the German VW Scirocco R Cup. These gave her a twentieth and sixth place at the Nürburgring, plus one fastest lap. Later in the year, she also drove in the ADAC Chevrolet Cruze Cup enduro at the Sachsenring, finishing eighth as the guest of the Maurer team. Her co-driver was Dietmar Stanka.

In 2011, she changed direction again, and began competing in the DTM, despite little experience in touring cars. She was driving a 2008-spec Audi A4 for Team Phoenix. Although she did not score any points, her finishing record was good, and her best finish was twelfth.

Her promise must have shown, as she was offered a deal by Abt Sportsline in 2012, racing a current-spec Audi A5. Her season started slowly, with a 16th place at Hockenheim, and she remained out of the top ten for much of the season. A pair of DNFs at Zandvoort and Oschersleben should have deterred her further, but an altered training regime started to pay off after that: a seventh place at Valencia, giving her her first DTM points. The season's finale at Hockenheim, never her favourite track, led to another 16th place. She was 19th overall in the championship.

She was retained by Abt Sportsline Audi for the 2013 season, but decided herself that she did not want to run in that year's DTM. She remained with Audi, concentrating on sportscars, and split her season between the ADAC GT Masters, the Blancpain Endurance Series and the R8 LMS Cup, based in China. It was the Chinese races that gave her her best result: a win at Shanghai. She was fourth in that championship.

The ADAC GT Masters, in which she also drove an R8, was more of a mixed bag. Rahel's best finish was sixth, at Spa and the Slovakiaring, but she was not as consistent as she might have liked, and was only 19th in the final standings. Her season was also marred by a serious accident at Hockenheim, from which she thankfully escaped unharmed. In the Blancpain Endurance Series, she drove with Marcel Fässler in the GT3 Pro class, and managed to finish two of her races, in fourteenth and fifteenth, at Paul Ricard and Monza respectively.

Another highlight of her season was finishing the rain-ravaged Nürburgring 24 Hours, in the R8. With Dom Bastien, Alex Yoong and Marco Werner, she was fourteenth in class.

2014 was more of the same, hopping between championships in an Audi R8. Most of her European action was in the ADAC GT Masters, although she was not quite on the pace, only breaching the top ten twice, with two ninth places at Oschersleben. In a competitive season with large grids, she was only 39th in the championship.

Mid-season, she made several visits to the Nürburgring. The 24-hour race came first, and she was twelfth in the SP9 class, 22nd overall. Her team-mates for Audi Race Experience were Dominique Bastien, Christiaan Frankenhout and Christian Bollrath. Later, in August, she made another appearance for the team in the VLN, and was fourth in class. In September, she joined fellow Swiss driver, Didier Cuche, and German Nico Muller for the Blancpain Endurance round at the 'Ring, but did not finish.

Much of her season, especially the latter part, was spent in the Asia-Pacific region. Her first race of the year was the Bathurst 12 Hours, driving a Phoenix Racing R8. Rahel, with René Rast and Laurens Vanthoor, was fifth in class A, in a race of high attrition. She then returned to the LMS Cup in Asia, and had another good season, with the Castrol team. She was third overall, with three second places and two thirds, although she did not repeat her 2013 win.

She raced the Audi again in 2015, again splitting her time between Europe and the Asia-Pacific region. Rahel and her team-mate, Philip Geipel, contested the ADAC GT Masters, and she was much more on the pace this year. Near the end of the season, she scored her first win, at Hockenheim, and she and Philip managed two thirds, at the Nürburgring and Zandvoort. She was tenth in the championship. Driving solo for the Castrol team, she raced in the Chinese LMS Cup in Asia, and was fifth in the championship, after a win in Korea, and five further podiums, from ten races. She also found time for a guest spot in the Audi TT Cup, and was fourth and fifth at the Red Bull Ring.

2016 saw her continuing her double-pronged assault on the Chinese LMS Cup and the ADAC GT Masters. Her GT Masters season was rather inconsistent, but she took another win, at Zandvoort, after a second place early in the season, at the Sachsenring. She was ninth in the championship. In China, in the same car, but for the Castrol team, she won two races, at Shanghai and Penbay, and finished on the podium on another five occasions. She was fourth overall.

She raced the R8 again in 2017, this time staying mostly in Europe. The GT Masters series was her main focus, but it was rather disappointing for her. She and team-mate Philip Geipel had a best finish of sixth, at Zandvoort. Rahel did much better at the Nürburgring, where she and her team-mates won the SPX class during a guest appearance in the VLN. They were third in the same class in the Nürburgring 24 Hours, finishing 31st overall.

At the end of the season, Rahel was invited to take part in the Audi TT Cup Race of Legends, the last-ever TT Cup race. She secured a fastest lap but did not finish.

The R8 was her main car again in 2018. She raced in GT Masters with Philip Geipel, but was not really on the pace this year. Her mid-season sojourn in the Seyffarth R8 LMS Cup was better and gave her three seconds and a third. Her Asian activities were limited to a guest appearance at Chang, where she did not finish.

The bigger endurance events were kinder to her. For the Nürburgring 24 Hours, she joined an all-female KTM team with Naomi Schiff, Lena Strycek and Laura Kraihamer. The quartet was second in the Cup X class and 39th overall. As part of another all-woman team, Rahel was second in class in the Gulf 12 Hours, sixth overall. The car was a Ferrari 488 run by Kessel Racing and her team-mates were Michelle Gatting and Manuela Gostner.

The three-woman Ferrari team continued in 2019, racing as the "Iron Dames" and managed by Deborah Mayer. They contested the European Le Mans Series and were accepted as an entry for Le Mans itself. The Iron Dames started the season well with second in the GTE class at Paul Ricard, which they repeated later in the year at Silverstone. They were fourth in the GTE championship.

Le Mans itself resulted in a finish, the first for an all-female team since 1977. They were 39th overall, ahead of their male Kessel team-mates in the sister "Iron Lynx" car.

At the end of the year, the Iron Dames reconvened for another attempt at the Gulf 12 Hours. Michelle Gatting was challenging for third in the second half of the race when she was involved in a collision with a backmarker and had to retire.

Away from the Iron Dames, Rahel continued to race for the Audi sportscar team. She competed in most of the Audi Sport Seyffarth R8 LMS Cup in Europe and would have been in with a strong chance of winning had she completed the whole season: she won six of her eight races and was second in the other two.

In the Nurburgring 24 Hours, Rahel and her three Audi team-mates were 19th overall and won the SP8 class for Giti Tyre Motorsport.

In Asia, she did some rounds of the Blancpain GT World Challenge Asia for Audi, picking up class third places at Fuji and Shanghai.

At the end of the year, Rahel was one of the five female pro drivers invited to join teams for India's X1 Racing League, a city team-based single-seater series. Each team had to consist of one male and one female international pro driver, plus pro and am Indian drivers. Rahel picked up second and third places in the two-driver relay events for DG Races Ahmedabad.