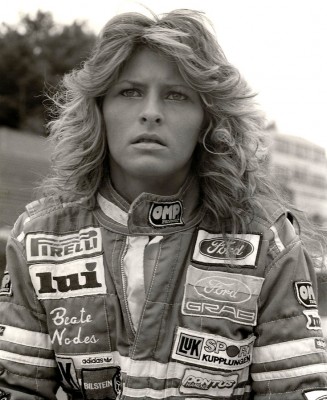 Beate is most famous for being the first woman to finish on the podium in a DTM race in 1986. Her third place came at AVUS. She was driving a Ford Sierra XR4 Ti.
Her earliest noted motorsport experience seems to have been Formula Ford, in her native Germany, in 1982. Interestingly, she was driving alongside Ellen Lohr, and both of them would end up competing in the DTM, with varying degrees of success.
Her first steps in touring cars came in 1983, when she was nineteen. She entered the Ford Fiesta Ladies’ Cup in Germany, and was second in her first season. On her return in 1984, she won the championship. This began a long relationship with Ford and Ford-engined cars, which Beate raced almost exclusively during her professional career.
That year, Beate tried a few different styles of motorsport. She drove a Cosworth DFV-powered Gebhardt JC843 prototype in one Interserie race at the Nürburgring, finishing sixteenth, towards the end of the year, followed by a visit to Sandown Park in Australia with the Gebhardt team. Beate, Frank Jelinski and Günter Gebhardt were twelfth overall, third in class in the 1000km event. Driving a Fiesta similar to her Ladies’ Cup car, she scored a class win in the Nürburgring 24 Hours, finishing 22nd overall.
Her DTM career began in 1985, and her first car was a Ford Escort RS Turbo. She entered three races, driving for the Grab Ford team. Her only finish was a fourteenth place at Siegerland; she did not finish at either the Nürburgring or Zolder. Away from the DTM, she also entered some German Formula 3 rounds, as well as some production car races. She and her Manfred Burkhard were due to take part in the Zolder ETCC round in another Escort RS, but the clutch failed, and they did not make the start.

1988 was her last DTM season. The Grab team retained her services for six races, still in the Sierra. At AVUS, she was twelfth and eighteenth. As ever, her best results were achieved there. At the Nürburgring, she scored one 25th place and one DNF, and at Wunstorf, two 25ths. She finished the season 42nd overall.
Away from the DTM, she won the 1990 Ford Fiesta Mixed Cup with Thomas Beyer, after a year-long break from motorsport. Driving with Achim Stegmüller, she was second in the 1992 Mixed Cup. In between, she campaigned a Sierra in the VLN, but did not achieve much success.
She retired after the 1992 season and concentrated on business interests, between then and her sudden death in 2008, following a heart attack. She was 44 years old.