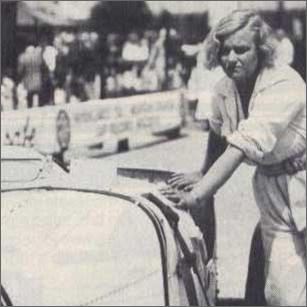 Eileen Ellison began racing in around 1930, perhaps slightly earlier. She was born in 1910, and was one of the younger members of the Brooklands ladies’ motor racing set. Her quiet, watchful demeanour and blond hair led some to believe that she was a German or an Austrian, who did not speak much English, according to Sammy Davis.

Her early involvement was as a car entrant, with Thomas Cholmondeley Tapper as driver in her Bugatti, and other cars. Eileen was wealthy and well-connected, and had access to any number of high-quality racing cars.

Her first major achievement was winning the Duchess of York's race for lady drivers in 1932. Her car was a a Bugatti T37. The opposition was stiff, and included Kay Petre (who was second) and Elsie Wisdom, both race-winners. The same year, she was third in the August Senior Mountain Handicap, driving with Cholmondeley Tapper.

The following year, she entered the Cobham Junior Short Handicap in the Bugatti, and finished second to Esson-Scott. In 1934, she was part of the all-female Singer works team for the Brooklands relay race, with Kay Petre and Sheila Tolhurst. They were fifth overall, after sandbagging when they discovered that the Ladies’ Prize could not be awarded to a top-three finishing team. As the Ladies’ Prize meant a Le Mans entry, they slowed down. For various reasons, Eileen never got to Le Mans, nor did Sheila Tolhurst.

Starting in 1935, she attempted several major races abroad, beginning in France. The Albi Grand Prix was one of her first, and she was seventh overall in the T37A after two heats, running as high as fourth in one race. Later, she was meant to drive in the Coppa Acerbo in Italy, but could not make the start for some reason.

Her best solo result was third, in the Voiturette class of the 1935 Lorraine Grand Prix. She was twelfth in the main standings, driving a Bugatti T40. Her Voiturette Bugatti was the T37. Both times, Cholmondeley Tapper finished one ahead of her.

In 1936, she travelled even further afield to race. She entered the South African Grand Prix in the T37, but could not finish, due to engine trouble. An entry into the Hungarian Grand Prix did not lead to a race appearance. Closer to home, at Limerick in Ireland, she shared a Maserati with Cholmondeley Tapper, and was second.

She is also said to have excelled at hillclimbs, by none other than Sammy Davis, in his book “Atalanta”. These are described as being “long continental climbs”, but results have proved tricky to track down. She is known to have raced a Maserati at Shelsley Walsh in 1936. The Continental events included the long Grossglockner climb, which she tackled in a Bugatti, and was once fourth in class. At the famous Klausen circuit, she is said by Davis to have been third in one event.

As well as Grands Prix and hillclimbs, Eileen also tackled the odd rally. She first entered the RAC Rally in a Bugatti in 1932, starting in London. She is also said to have driven in the same event in a Lagonda at some point.

After 1936, Eileen’s racing career seems to peter out, following one of her busiest years.

She lost her first husband, a fighter pilot, during the Second World War. She later remarried and settled in South Africa, scene of some of her earlier racing activities. She moved between here and Jersey until her relatively early death from liver cancer, in 1967. Her death is often attributed to jaundice, due to prejudices surrounding cancer in the past.

The relative merits of Eileen’s career are still debated today, with some observers regarding her as a talented driver, while others consider her a plucky amateur at best. She appears to have been one of those characters on whom everyone has an opinion, both during life, and after death.

(Picture from http://www.eileenellison.com/)
Posted by Rachel H-G at 15:20