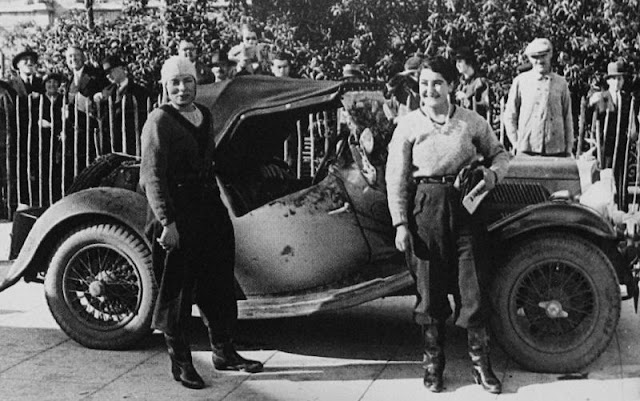 Simone (right) and Odette Siko with the Triumph, 1935


Simone des Forest was a popular figure in her native France, and enjoyed a lengthy motorsport career, on both sides of the Second World War. Born in 1910, she was the youngest of the French ladies’ motor racing “set” of the 1930s, which included Madame Hellé-Nice and Anne Itier. She learned to drive at the age of twelve, at home, and at nineteen, was described by some sources as one of the first French women to earn a driving license.

Her competition career began very soon afterwards, in 1930. Her first event was a hillclimb at Baraque. In 1931, she is described as having entered a Paris-Vichy race, perhaps a road race, although no entry lists for this event, have come to light. It is quite probable that “Paris-Vichy race” refers to a stage of the Paris-St. Raphaël Rally. Some female racers of the time faced the disapproval of their families, but not so Simone; her mother is described as her co-driver from Paris to Vichy. Her mother was also her navigator for the Paris-Antibes-Juans-les-Pins rally in 1931, in the family Rosengart.

After a quiet couple of years, Simone reappears on the motorsport scene in 1934. She was talent-scouted by Charles de Cortanze for the Monte Carlo Rally, following her performances in a series of ladies’ races at Montlhéry, organised by de Cortanze himself. Simone partnered Fernande Hustinx in a Peugeot 301, starting at Bucharest. They won the Coupe des Dames and were seventeenth overall. Simone kept a detailed notebook, complete with skilful illustrations, of her journey, which has partly been published.

The following year, Simone teamed up with Odette Siko for the Monte. They were driving a Triumph and won their class. The pair may also have entered the Monte together again in 1937. At around this time, she also entered the Paris-St. Raphaël at least once, apparently in an Amilcar.

In 1937, Simone’s most high-profile activity was her involvement in the Yacco speed trials at Montlhéry, a series of record-breaking runs in a giant Ford-engined Mathis “Matford”. Yacco Oil had assembled an all-female team of Simone, Odette Siko, Claire Descollas and Madame Hellé-Nice, who were to attempt a string of speed and endurance records. Claire Descollas, who was nominally the team’s captain, and after whom the Matford, “Claire”, was possibly named, dropped out after the first day of runs, and the endeavour was also troubled by friction between Hellé-Nice and the rest of the team. Simone, the youngest of the four, did not see eye-to-eye with her more flamboyant and well-travelled colleague, and Odette Siko had to keep the peace. Nevertheless, despite these setbacks, the Yacco ladies’ team set 26 new records , some of which still stand.

Her activities between 1937 and the outbreak of war in 1939 are hazy: there are references to her finishing tenth in a French road racing championship, but little in the way of solid results. During the war itself, she worked as a truck driver for the Red Cross.

Unlike many of the French racers of the inter-war years, she recommenced motorsport after the end of the war, having escaped unscathed. In 1953, she entered her first Mille Miglia, at the age of 43. She and Annie Bousquet were driving a Renault 4CV, and were 282nd. There are photographs of Simone standing next to a 4CV, alone, in circulation, and she may have used this car in rallies, or in regional races. Later in the year, she teamed up with Elyane Imbert, driving a Porsche 356 Super 1500. They entered the Spa 24 Hours and Nürburgring 1000km during the summer, but were disqualified from both races. In the German event, this was due to receiving outside assistance.

Simone apparently remained active in motorsport until 1957. After that, she retired, concentrating on running her own driving school, which was established in 1950. As well as motoring, she took an interest in flying, and qualified as a pilot. Her airborne activities may account for some of the gaps in her competition record, on both sides of the war.

After her death in 2004, at 94, she lives on in French culture. The popular expression “En voiture, Simone!”, said to indicate the start of some action or another, refers to Simone des Forest, after being used in a TV programme in 1962.

(Photo taken from http://rallyemontecarlo1935.unblog.fr)
(Thanks to Richard Armstrong for data.)
Posted by Rachel H-G at 14:15