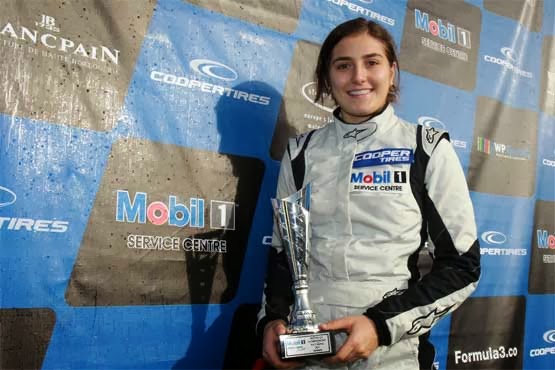 Tatiana is originally from Colombia. In common with several other Colombian racers of the time, including Manuela Vasquez, she moved out of her home country very early on, to pursue her motorsport career. Even as a teenage karter, she was travelling to the States in order to compete in US and international races. This was combined with the Colombian championship, and her school studies.
Tatiana debuted in full-sized cars in 2009, at 16. Unusually, she chose sportscars, rather than one of the junior single-seater series, for her first championship. She drove in the Radical European Masters Series with Natacha Gachnang. They were driving for the PoleVision team. Tatiana finished on the podium four times, and won the SR5 class outright. This was in addition to karting, in Europe and the States.
In 2010, she returned to America to contest Formula Star Mazda, driving for the Juncos team. After a shaky start to the season, beginning with a DNF at Sebring and a 19th at St. Petersburg, she was soon closer to the pace, with ninth at Laguna Seca. After four more top-tens, including a best finish of seventh, at Autobahn, she was tenth overall in her first season of single-seaers.
A second season in Formula Star Mazda with Juncos beckoned for 2011. Again, her season started badly, with a DNF at St. Petersburg, but she immediately got back on the pace, with a third at Barber. At Mosport, she achieved a second third place. This was a first for a female driver in this particular series. For the rest of the season, apart from one non-finish, she was never out of the top ten, and was sixth overall.
As well as American single-seaters, she also returned to Europe for the latter part of the Euro F3 Open series. Her first round, Monza, gave her a tenth and eleventh place. She was not quite as fast at Jerez, but she was ninth in her second race at Catalunya, enough to give her 21st overall.
In 2012, she raced in Euro F3, and scored one third place at Paul Ricard, in the Winter Series. She did not fare quite as well in the summer series, at least to begin with, although she picked up some speed towards the end of the season. At the Paul Ricard round, she was fifth and seventh, and at the next meeting, in Hungary, she was fourth and seventh. The fourth was her best finish. At the end of the season, she was ninth. In addition to this, she also entered some Alpine Formula Renault events, at Mugello and Catalunya. She was not among the front-runners. On a visit back home, she entered the 6 Hours of Bogota, sharing a Radical with Juan Camilo Acosta, Juan Esteban García and Luis Carlos Martínez. They were third, and second in class. Tatiana’s sister, Paula, was also racing in the event, for a different team.
2013 was also focused on F3, mainly the FIA European Championship, but before the northern hemisphere season began, she travelled to New Zealand, for the Toyota Racing Series. After a consistent run of finishes, she was twelfth overall. Mid-season, she had a good meeting at Taupo, and scored her best finishes, a fifth and an eighth place.
Back in Euro F3, she struggled somewhat. Although she consistently made it to the end of her races, with the exception of the sixth round, at the Norisring, her best finish was only fifteenth, at Silverstone. Her team had trouble finding a suitable car set-up, which meant that qualifying was an issue. Subsequently, Tatiana’s confidence took some knocks, but she carried on.
Britain was a better hunting ground for her.  She scored one podium place in the British International series, at the Nürburgring, as well as fourths at Silverstone and Spa. She was seventh overall, the second of the Double R drivers in the standings..
The two races she did in the Euro F3 Open series were also better - she was sixth and seventh. She was driving for Emilio de Villota’s team, as she had for the 2012 Winter Series.
Late in 2013, she tested for the Auto GP series, at Jerez.

During the winter season, Tatiana went back to America, and raced in the Florida Winter Series, a Formula Renault championship run by the Ferrari Driver Academy. She began very well, with a win at Sebring, but her performance tailed off towards the end, averaging sixth place. Not long after, she decamped to Europe again, and took part in one race of the Euroformula Open Winter Series, finishing fourth for the Emilio de Villota team.

The main part of the season was spent in the European Formula 3 Championship, with Jo Zeller Racing. It was an abrupt decision to sign with the team, just days before the start of the season. This left no time for testing. She did not get the best of starts in the first meeting, at Silverstone, finishing a lowly 23rd in her first race. Towards the middle of the season, her results began to improve, and she was fifth at Spa in June. She managed seven more top-ten finishes, and was 15th in the championship.

At the end of the season, she got herself an entry in to the Macau Grand Prix. There have been virtually no female drivers in the single-seater event there, prior to Tatiana. She was thirteenth, from 16th on the grid, in a challenging race with a lot of high-profile retirements.

In 2015, she returned to the European Formula 3 championship, with the Jagonya Ayam Carlin team. For the first part of the season, it was an uphill struggle, and driving standards by all participants were called into question. Tatiana picked up some speed at the Norisring, getting up to twelfth place, and she repeated this at Zandvoort. She was unplaced in the championship.

She drove in GP3 for Arden International in 2016, and scored her first GP3 top ten, a ninth and tenth at Hockenheim. However, several DNFs at the end of the season broke up her rhythm, which she found very disappointing. She was 21st in the championship.

Driving for another team, Teo Martin Motorsport, she also tackled the 2016 Euroformula Open. She was almost always in the top ten, and got onto the podium at the Red Bull Ring, in third place. She was ninth in the championship.

In March 2017, Tatiana was announced as a development driver for the Sauber Formula One team. She undertook testing duties and simulator work. Her Sauber role ran in tandem with another GP3 season, with the DAMS team. It took a while for the team to get their cars running well, but Tatiana was the second-best of the team, with a seventh and a ninth, at Monza and Jerez. She was 18th in the championship.

At the end of the season, she made a guest appearance at the last-ever World Series Formula V8 meeting, held at Bahrain. She was fifth and third, despite never having driven the car before.

2018 was a mixed year. She continued to be affiliated with Sauber and made two appearances in a Formula 1 car, both demonstration runs, one in Mexico and one at Sauber's Fiorano track. Her GP3 season with Jenzer Motorsport was somewhat lacklustre; she became a consistent top-ten finisher towards the end of the season but never challenged for podiums, despite setting some good times in practice and qualifying. She was 16th in the championship.

Towards the end of the year she became involved with 2017-18 Formula E champions Techeetah. Initially, she was brought in for the women drivers' test day organised by the Saudi motorsport authorities, but she was invited back for official testing after the Marrakech race and set the second-fastest time of all the rookie drivers.

She raced in Formula 2 in 2019 with the Arden team, supported by BWT. She was the first female driver to take part in the revived championship and she started well enough with a thirteenth place in Bahrain. At Paul Ricard, she almost got into the top ten, but she was off the pace of her team-mate Anthoine Hubert. She was also affected when Hubert was killed in an accident at Spa.

She was 22nd in the championship and it is unclear whether she will get another season.

At the end of 2019, she signed up for the Asian Formula 3 championship, driving for Seven GP. She was unable to finish the first race but was fourth in the second.

In 2020, she will be one of an all-female driving squad for IMSA, driving a Grasser Racing Lamborghini with Katherine Legge and Christina Nielsen.
(Image from www.thegrid.co.uk)