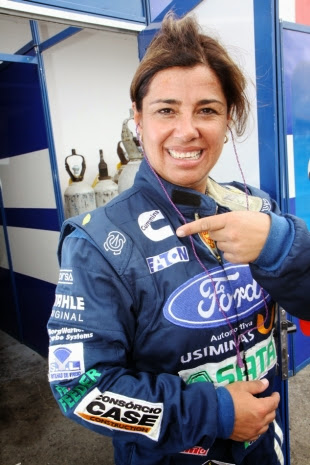 Brazil’s Maria Cristina Rosito is probably best known for her exploits in Formula 3 in the 2000s. She has raced in multiple motorsport disciplines since the 1980s, in South America, and has been one of the foremost female drivers both there, and in the world, for much of that.

She was born in 1966,  and even before she began her motorsport career, competition was a big part of her life. As a junior, she swam competitively and raced motorcycles and bicycles, before turning  to karting in 1981. She won multiple local and Brazilian junior championships in all of these disciplines, sometimes alongside her sister, Maria do Carmo. Maria was also a junior women’s motorcycling star, but retired in 1978. They were both supported by their father, Raffaele Rosito, who raced cars himself.

After some years spent switching between cycling, motorbikes and karting, depending on finances, she seems to have moved into senior circuit racing in 1983, shortly before her 17th birthday. She drove saloon cars in long-distance events, usually around Rio Grande do Sul, her home region, but sometimes further afield. Her car was a Fiat 147. That year, she was third in the Tarumã 500km, and also drove in the 12 Hours of Interlagos, both in the São Paulo district. In 1984, she continued to race the Fiat, taking part in the Itali Cup for Italian cars.

In 1985, she made her first attempts at single-seater racing, interspersed with some karting. She entered the Brazilian Formula Ford championship. One of her competitors appears to have been Gil de Ferran, but her results are proving hard to track down. She also drove in two rounds of the South American Formula Two championship, presumably in Brazil, but did not score any points.

A couple of quiet seasons followed. Knowing Maria Cristina’s early racing history, it is not unfeasible that she returned to motorcycle racing or karting, perhaps while gathering funds. However, she re-emerged in 1988, carrying on where she had left off. Her Fiat had been exchanged for a Volkswagen Passat for the Brazilian Drivers and Manufacturers’ Championship. This move paid off; she won her first big race this year, the Tarumã 500km, driving alongside Paulo Hoher. The duo were also second in the 3 Hours of Guapore, fifth in the 3 Hours of Tarumã, and eighth in the Guapore 500km. In the Regional series, they won a race at Tarumã, and were second in another.

Her success in touring cars was supported by success in single-seaters, too: she won the Gaúcho Formula Ford championship, for drivers from Rio Grande do Sul. One of her most noteworthy achievements this year was winning two races in one day, at different tracks, in different categories.

Between 1989 and 1991, she seems to have concentrated on touring cars, maintaining her partnership with Paulo Hoher. In 1989, they won the regional championship, before Maria Cristina moved on to the Drivers’ and Manufacturers’ Championship in 1990, still in the Passat. She raced at least once with Neco Torres. Her 1991 co-driver for this series is unknown, and actual results from this period are not forthcoming.

By 1993, she was back in a single-seater, racing a Formula Chevrolet at Guapore, where she was seventh, ahead of Bruno Junqueira. She may also have raced in this category in 1992. Her activities for most of the mid-1990s are uncertain, and she may have taken some time out of motorsport completely, as some articles mention one or two breaks from competition. In 1995, she is mentioned as having taken part in Formula Hyundai Femenina in Argentina, a women-only saloon racing series. However, no results for this championship have come to light. In 1997, she returned to the Gaúcho Drivers and Manufacturers’ Championship with Airton Diehl, although her race results are, again, proving elusive. 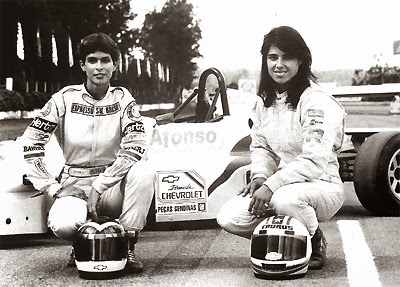 After some possible time on the sidelines, she appears on entry lists once more in 1999. She won two races of another women-only series, the Campeonato Women Corsa. This championship was organised by Maria Helena Fittipaldi, during her tenure as a senior official for AMPACOM, the Brazilian women racing drivers’ association. The final result of the championship has been unfortunately lost, although it is known that there was some controversy around how identically-prepared the 1.6 GM Corsas used in the races were.

The following year, 2000, Maria Cristina got back into a single-seater, this time a Formula 3 machine. She entered the South American Formula 3 championship, running in the Light category, and was eighth overall. She also drove in two rounds of the main Formula 3 championship, at her favoured track of Tarumã, with the Avallone team. She was fourteenth and fifteenth in her two races. As well as her modest F3 achievements, she showed she still had the strength for endurance racing, by winning the 12 Hours of Tarumã in a VW Spyder. She was part of a four-driver team with Decius Dornelles, Paulo Sérgio Pereira and Bertuol.

There was no Formula 3 for her in 2001, but, showing her usual willingness to race almost anything, she entered the Campeonato Brasileiro Ford Fiesta Feminino, a women-only one-make series for Ford Fiestas. It was, again, organised and fronted by Maria Helena Fittipaldi and AMPACOM, and had tighter technical rules than its predecessor. Many of the 1999 Corsa racers came back, and Maria Cristina was among the fastest straight away. She won the championship.

In 2002, she stuck with saloon competition, and entered the Brascar Championship. She was competing as a single driver, and is known to have finished eighth in the Curitiba race. However, even the details of her car seem to have been forgotten. Her 2003 Brascar season is better-documented: she drove a Volkswagen Spyder in the Sports Prototype class, with Marcus Peres. They finished strongly throughout the championship, and were runners-up at the end of the season. They won at least two races, at Londrina and Curitiba.

After a break of three seasons, she returned to Formula 3 in 2004. As in 2000, she entered both the Light and main classes of the Sud-Am championship, but this time, only did two races in each. She was driving for the Dragão Motorsport team and competed in the two Tarumã races, finishing the first one in ninth place. She did not finish the second. This was just enough to get her sixth place in the Light category.

After this adventure, Maria Cristina’s career seems to enter another quiet period. For the next couple of years, she did some sportscar racing, including a run in the 2007 Gaúcho Endurance championship, driving for Nelson Piquet’s Piquet Sport team. In 2010, she did at least one round of the Gaúcho Endurance championship, at Velopark, driving a Ford Fusion. Her team-mate was Andersom Toso. In between, she competed in drag racing, winning at least some class awards in 2008 and 2009.

She returned to full-time competition in 2011, this time, in truck racing. She drove for the DF Ford team in Formula Truck Brazil, alongside team-mate Danilo Dirani. Unfortunately, she was not among the front-runners, and finished the season 21st overall.

She went back to sportscars for one guest appearance in 2012, driving a Ginetta G50 for Manelão Competições in the Brazilian Endurance Championship. The following year, she did some guest runs in Sprint Race in Brazil.

This seemed to have been her last competitive outing, at the age of 46, but she came back again in 2015, to do some racing in the Brazilian Sprint Race series.

She had more of a full-time return in 2017, this time racing trucks. She and Uruguayan Carolina Canepa formed the Woman's Racing Team for Formula Truck. Maria Cristina was fourth in the championship, with a best finish of third, at Londrina.