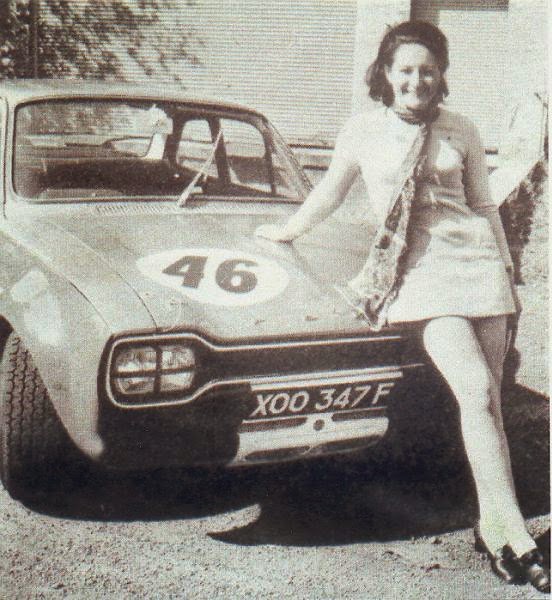 Yvette in a Ford promotional shot, 1969 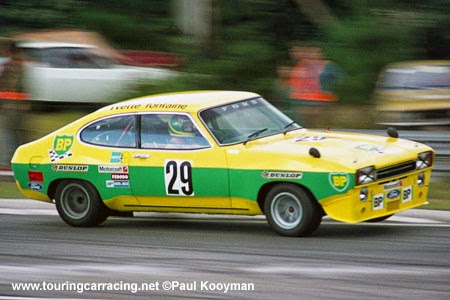 Through Ford’s links with Chevron, Yvette’s career received a welcome new challenge, in the shape of sportscar racing. She raced a Ford-engine Chevron B21 in the Spa 1000km, with her erstwhile rival, and replacement at Alfa Romeo, Christine Beckers. They did not finish, but this proved valuable practice for Le Mans, the following month. Driving as the “Ecurie Seiko Sato”, Yvette and Christine, with Marie Laurent, were 17th overall, and won the 2000cc class.
Despite her continuing good performances in the face of decreasing support, Ford dispensed with Yvette’s services at the end of the 1974 season. The fuel crisis had hit them hard, and sponsorship was getting harder to come by. Her modest Le Mans success was recognised, and she was invited to be part of Anny-Charlotte Verney’s Porsche 911 Carrera RS team. They were eleventh overall and second in class. The third driver was Corinne Tarnaud.
The Belgian touring car championship itself had gone into decline, and now only had three rounds. The European series was plagued by problems. Yvette had been in talks with BMW about a drive, but it did not materialise. She was picked up by Atlas Racing for a couple of rounds of the Trophée l’Avenir, driving a BMW 3.0 CSi. Her team-mate was Noel van Assche, known as “Pedro”. They were eleventh in the EEG Trophy, but second in the Spa 24 Hours. This was Yvette’s best-ever finish in that race.
After this, Yvette called time on her professional racing career, at the age of 29. Although she had won many races and achieved considerable success, there was now less money in motorsport than ever, and she had never been paid anything near the amounts her male team-mates had. In 1976, she accepted a couple of drives in a Chevrolet Camaro in the ETCC, but these were her last big races. She shared Reine Wisell’s car with him and Stuart Graham for the Spa 24 Hours, but did not finish. In a different Camaro, for “Team Zip-Up”, she was 20th, but not classified, in the Tourist Trophy at Silverstone. Her team-mates were Rune Tobiasson and Rudy Host.
The end of her professional career was not the end of her involvement with motorsport. Yvette continued, and continues, to compete, on and off, in club rallies, hillclimbs and races, and historic events. She has also organised track days for female drivers. In 2018, she did some parade laps at Brands Hatch in a celebration of 50 years of the Ford Escort.
(Images from www.forum-auto.com and www.touringcarrracing.net (Paul Kooyman).