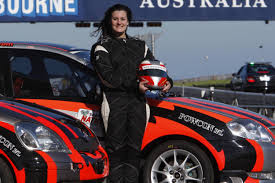 Lauren came to prominence as a frontrunner in the Australian Formula Three Trophy in 2006. In 2010, she made headlines, as part of the first father-daughter team to finish the Bathurst 12 Hour.

Her first major racing car was not a single-seater, but a Toyota Corolla, which she used in Improved Production races at State and National level, in 2003. That year, she made her first appearance in the Australian Production Car Championship, taking a guest spot in a smaller Proton Satria.

In 2004, she raced in the APCC, in the Satria again, finishing fourth in Class D after twelve races. This was in addition to some more club racing in the Corolla.

The following season, she took her first steps into single-seater racing. Bravely, she bypassed Formula Ford and Formula Vee, and jumped straight into the B class of the Australian Formula 3 championship. Despite her lack of open-wheel experience, she was fifth in the class, driving for the dominant Scud Racing team.

As well as a ten-race F3 schedule, Lauren was very busy in 2005, with a full programme of Production Car racing in a Toyota Echo Sportivo. She was third in Class C, and tenth overall.
2006 was another very full season. Lauren moved into the Trophy class of Australian F3, still with Scud Racing. She was one of the leading drivers, with two wins, nine additional podiums and an overall runner-up spot. Her F3 programme also took in the two Australian Grand Prix support races.

Touring cars had certainly not been forgotten. She returned to Class C of the APCC, and the Toyota Echo, and was third in class, fifteenth overall. This year, the Toyota was running under the “Lauren Gray Motorsport” banner. The team ran two cars, one for Lauren and one for Amber Anderson. As well as the APCC, Lauren Gray Motorsport made appearances in other production saloon racing series, and picked up points everywhere.

She moved up to the National class of Australian F3 in 2007, and was second, driving a 2001-spec car. Another season in the APCC gave her a fifth in Class C, although the Echo was not really powerful enough to compete in the overall standings. She was 24th in the championship.

In January, Lauren had been part of an all-female team for the Bathurst 12 Hours, with Leanne Tander, Samantha Reid and Christina Orr. They drove a Holden Astra, but did not finish.

Despite her obvious skill in a single-seater, she returned to saloon competition full-time for 2008, in the Australian Manufacturers' Championship. Her car was still the Toyota Echo and she won her class overall. During the season, she scored many class wins and even a few top ten overall finishes, despite having one of the smallest and least powerful cars in the field.

In 2009, she drove again at Bathurst for 12 Hour race, and recorded her first finish. Driving a BMW 130i with John deVeth and Rob Thomson, she was second in class and 19th overall. Unfortunately, this was her only big race of the season, although she did make some appearances in the Victorian State Improved Production Car series, driving a Toyota Corolla.

She contested the 2010 Australian Production Car Championship in a Toyota Corolla Sportivo, driving for her own team, and was tenth overall, although she only contested six rounds. At Phillip Island, her sister Maddison drove with her. Her father, Michael, was another team-mate to her, and the family theme continued at the Bathurst 12 Hours. The Lauren Gray Motorsport Corolla was fourth in class D. This was the first time that a father-daughter team had started the race, after Tania Gulson failed to qualify with her own family team. Tony Head was the Grays’ third driver. They were 19th overall.

As well as the APRC, she did a few races in V8 Utes, driving a Holden Commodore pickup.

2011 was somewhat of a disjointed season, with some Production races in the Corolla, but not really enough to make a dent in the standings. She was sixth in Class D. The rest of the season was spent in a Holden Torana, in Sports Sedan races, at State and National level.

In 2012, she was set to contest the Aussie Racing Cars series, in a Holden Commodore, with the LaFemme Racing Academy team. This did not happen, and she spent the season hopping between Aussie Racing Cars and the Australian Production Championship, in a Commodore and a Toyota Echo respectively. She was driving for her own team, alongside her sister Maddison and Samantha Bennett. Lauren was third in Class E, just above Maddison. She did less well in Aussie Racing Cars, finishing 33rd overall after a part-season.

2013 was spent mostly on “maternity leave”, but she returned to the circuits in 2014, again hopping between championships. Jumping back into a single-seater, she scored a few points in the Victorian State Formula Vee Championship, and did a part-season in the Manufacturers' Championship. Her car was a Ford Falcon, and her best result was an eleventh place in class, at Phillip Island. She was running in Class B, for Production cars. A part-season in the APCC, running the same car in Class C, gave her a fifteenth place overall. She was driving for the Australian Auto Wreckers team.

2015 has so far been a quiet one for Lauren, on the competition front anyway. She has been following the US Rally Championship in America, with the FY Racing team. It seems that her future plans may lie in this direction.