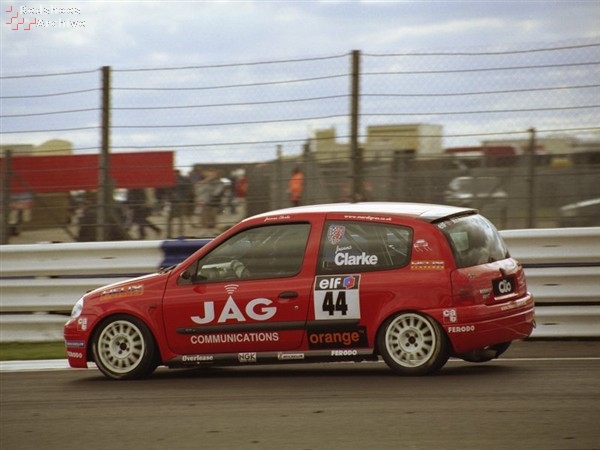 Joanna in the Clio

Joanna Clarke is one of a select group of female racers who have competed in the modern British Touring Car Championship.

Her first senior races were in 1998, at the wheel of a Peugeot 306, in a club meet at Silverstone. This followed several years of karting, with multiple race wins, partly achieved through a school team.

Early in her career, she w as a promising single-seater driver. During her first season, she tried her hand at Formula Ford and Formula Vauxhall Junior, coming third in a Vauxhall series. She won her class in a British Formula Ford race at Donington in 1999. This, and some other strong finishes, gave her third place overall in the First Division class. At the end of the year, she was awarded the BWRDC’s Monoposto Award, for the most successful single-seater driver.

She later ran well in the 2000 Ford Fiesta Zetec championship, with a best finish of fourth. She was racing against her fellow future BTCC drivers, Gordon Shedden and Gareth Howell. As she had been awarded a Ladies’ Cup, she received a prize drive consisting of a test in a Ford Mondeo.

The Ford test did not lead to a BTCC drive, but part-way through the season, she was signed up by eccentric millionaire, John B&Q’s team. She was deputising for John B&Q (John Batchelor) himself, driving a Honda Integra Type-R in the Production class. Her first races, at Knockhill, gave her a fourteenth and sixteenth place, from the back of the grid, and one tenth place in class. She was 18th at Snetterton, but did not finish the second race, and her final meeting, Croft, was a bit of a disaster, with a blown engine on lap one of the first race, which meant she was unable to start the next second. Her team-mate, Mark Beaumont, suffered the same fate. She was 25th in the Production drivers’ championship.

In September, Joanna also drove in the Renault Clio Cup for the Mardi Gras team, as one of their usual drivers, Duncan Vercoe, was unavailable. She was 16th in one race, at Silverstone, from 23rd on the grid.

A lack of finances kept Joanna away from motorsport for quite a long time. In 2004, she did some Legends racing, but was not really competitive.

She has not been active in motorsport since then.