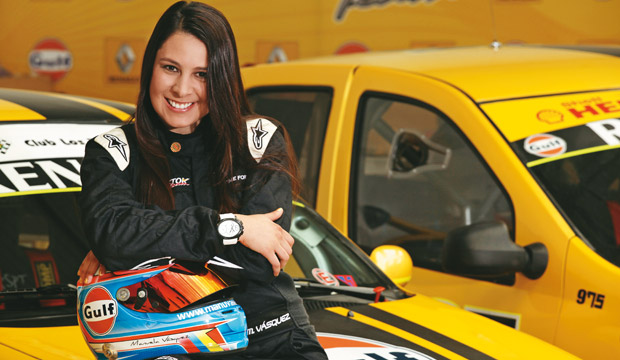 Manuela Vasquez is a Colombian driver who mostly races in Europe.

She started relatively late in karting, at 23, and first travelled to Europe as a karter in 2008, as part of an Italian team, for some international races. She had previously been quite successful in senior Rotax karting in Colombia. When she finally made it onto the track, it was the realisation of a long-term ambition; she had been interested in cars from early childhood, despite having no history of motorsport in her family. Her mother has blamed this on cravings she had for the smell of petrol during her pregnancy!

In 2010, she made the switch to cars, whilst still based in Europe. Driving for Monolite Racing, she entered eight rounds of the Italian Clio Cup, and was 24th overall. Her best finish was eighth, at Mugello. This happened right at the end of the season; she started as a backmarker. Back home, she did five TC2000 races in Colombia, in a Mazda 626. She shared the car with Mario Andres Rojas, and was 32nd in the championship.

Her programme was similar in 2011, although she was now with Rangoni Corse in Europe. The season began in Italy, for the start of the Clio Cup. The season began inauspiciously with a DNF, but picked up again. Later, she managed and eighth at Red Bull Ring and a tenth at Mugello. Towards the end of the season, she flew back to Colombia for two TC2000 races in a Chevrolet, at Bogotá, finishing fifth and eleventh, then it was back to Italy, where she scored her season’s-best: two fifth places at Varano. She was thirteenth overall. Her season was rounded out by a run in a Dacia Logan in the Bogotá  6 Hours, in which she was third in class. It was her second attempt at the race.

The Clio Cup was initially her principal focus for 2012, but initially in Spain rather than Italy, taking in some Eurocup rounds. She was fifteenth in the championship, and top female driver, after at least two top-ten finishes, ninths at Navarra and Aragon. Another part-season in Italy yielded some great results, the best of these being a second place at Varano in the Super Touring class, having started from pole.

In 2013, she moved back to Italy and entered the Ginetta G50 Cup, still with Rangoni Corse. It was her first experience of GT racing. She scored a ninth place, in her first race at Misano, and her best finishes seem to have been fourth, at Salzburg, and fifth at the Red Bull Ring. She was tenth overall.

She also did some karting, as part of a Colombian team.

Her 2014 season does not seem to have gone to plan. She was set to contest the European GT4 Cup in the Ginetta, but this did not happen. Instead, she took part in some Top Race events in Argentina, and scored a fifth place at Rio Hondo. Her car was a Volvo.

In 2015, she did another part-season in Top Race, scoring one top-ten finish, a tenth place at Parana. This time, she was driving a Chevrolet.

In interviews, Manuela has said that her future aims include the British and World Touring Car Championships. However, despite having some strong sponsors on board, her racing career has not taken off in the way that it might have done. For the last couple of years, she has been doing media work, including a desert adventure reality TV series in Colombia, in 2014.