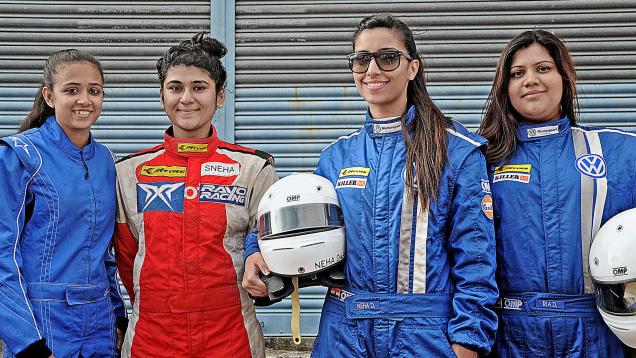 The Indian motorsport scene is growing rapidly. In the past two or three years, female drivers have been part of this, in both single-seaters and saloon racing.

Alisha Abdullah – best known for racing motorcycles (she is one of India’s only professional bike racers), but started on four wheels, and still competes in cars occasionally. Between 2010 and 2012, she raced in the Indian Volkswagen Polo Cup, with a best overall finish of eighth, in 2011 and 2012. In 2011, she scored her first podium. After a few years of racing bikes almost exclusively, she travelled to Thailand for a women’s race, part of the 2014 Toyota Vios Cup. She won the race outright. In 2016, she planned a return to four-wheeled competition, but this did not seem to happen. She spent a lot of time running and promoting her women's riding academy.

Neha Dabas – the elder of the Dabas racing sisters. In 2015, she competed in the Volkswagen Vento Cup in India. This was her first season of racing. Her best overall result was eighth, in the second round at Coimbatore. In 2016, she was selected again by Volkswagen India as one of its twenty drivers for the Vento Cup, but she did not make the final grid. She was previously, as a teenager, a national-level basketball player for India.

Ria Dabas – the younger of the Dabas racing sisters. Her first season of racing was in 2015, when she was chosen as one of the drivers for the Volkswagen Vento Cup in India. Previously, she raced motorcycles, and was India’s youngest female superbike racer. Despite her track experience, she was not quite as fast as her sister, and had a best finish of thirteenth, at Buddh.

Megaa Ganga (KS) - raced in India as part of the all-female Team Ahura in 2018. Her first race was at Kari Motor Speedway. She was one of six women drivers chosen to represent the team in the JK Tyres LGB Formula 4 championship. Megaa was the fourth fastest of the six and was the leading Ahura driver in the first race. She was 19th overall in the championship, the second of the Ahura drivers. Her best finish was twelfth at the BIC circuit in Greater Nolda.

Uma Hataria - raced in India between 1986 and 1987, when she competed in stock cars. She is said to have won a championship in 1987, although details are scarce of her career. She now directs a racing team and is the inspiration behind her son Sarosh’s founding of the all-female Ahura Racing. In 2019, Uma tested an LGB Formula 4 car with the latest crop of Ahura drivers.

Sneha Sharma – races in Formula 4 in India, as part of the JK Tyres Racing Championship. She began in 2013, after several years of karting, which gave her several notable wins. The Indian Formula 4 championship is not sanctioned by the FIA, and finding its race results has proved impossible. Sneha has also raced in the VW Polo Cup and the Toyota Etios one-make championship, and got into the final twelve of a Mercedes driver development challenge, in India. In 2016, she continued in the JK Tyres series, and was tenth in the championship. In 2019, she attempted to qualify for the women-only W Series, but did not get past the first round. She spent the season moving between the Formula RGB India championship and Southeast Asian Formula 4. She was tenth in the F4 series for Meritus GP, with a best finish of fifth at Sepang. Despite only being 23 years old in 2016, she works as an airline pilot.