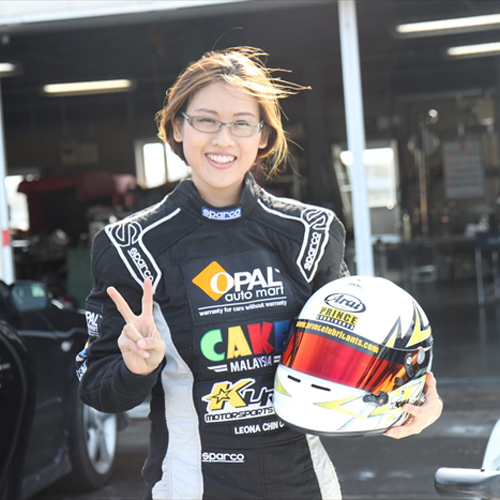 Leona Chin came to prominence as a member of Malaysia’s Red Bull Rookies all-female driving squad in 2008. She beat many other young Malaysian women to the coveted team spot.

She was sixth in Class B in the Merdeka Millennium Challenge in 2008, driving a Honda DC2 with Puteri Ayu Jasmin, Norlina Johor and Norbaizura Ruslan. They had qualified first in their class.

Prior to her first year as a Rookie, she had not done any circuit racing, but she had done some drifting, which is very popular in Southeast Asia, competing since 2006. She got into drifting and the modified car scene as a teenager. As soon as she was old enough to own a car, she got involved herself.

In 2009, she tackled the Sepang 1000km in a Honda DC2, with Puteri, Diana Chin and Nur Hayati Omar. They were 21st and fourteenth in class. Her calendar also took in rallysprint events in the MAM Championship, winning a Ladies’ and Junior title. Her car was a two-litre Proton Satria.

She raced a Honda in the Ultimate Challenge in 2010. The Challenge is a Honda-sponsored amateur motorsport competition, involving karting and circuit racing.

2011 was mostly spent drifting, although she did take part in the HPC 4-hour endurance race in Malaysia, and was fourth in class, driving a Mazda Miata. She also did some Autocross grass racing. Although she did not do much wheel to wheel racing, her profile remained high, due to promotional work and TV appearances.

In 2012, she continued with drifting, time attack, gymkhana and grass racing, and did some speed events in 2013, using a Radical, among other cars. For the next three seasons, she competed around Southeast Asia, winning several ladies’ prizes and becoming something of a name in the modified car scene.

She returned to the circuits in 2015. This was a new challenge, as she was racing a Caterham, and she had not really driven an open sportscar before. She was competitive from the beginning. In only her second race, at Sepang, she won the Supersport class. Out of the eight races she did, all ended in podium finishes.

At the end of the year, she also drove a Subaru Impreza in the 6-Hour Endurance race at Guangdong Raceway, as part of a four-driver team with Sam Lau, Xi Xu Ping and Sun Qiang. They were fourth in class. Her promotional activities this year were also more circuit-focused, and included autocrossing against Jari-Matti Latvala for the launch of the VW Polo Trophy model in Malaysia.

For 2016, she stuck with one-make series and travelled to China to compete in the Renault Clio Cup. This was a move that paid off; she was immediately on the pace, and on the podium. In her second race, at Zhuhai, she was third, and then scored two seconds in Korea. She was second in the championship, with seven top-three finishes in total. Throughout the season, she was never lower than fifth.

She entered a round of the 2018 Mini Challenge Asia at Zhuhai and finished third overall.

In 2019, she raced in the Malaysian Championship series, driving a Suzuki Swift. She was second in the MTC class for saloon cars, with three wins from nine races plus three further podiums.

Driving for a different team in a different car (a Proton Saga), she entered the Sepang 1000km as part of an all-female team with Faye Kusairi and Nurul Husna Nasaruddin. They were seventh.

Leona has many sponsors, for whom she makes appearances in the Asian media. As well as racing herself, she runs her own car accessories firm, Kuraz Motorsports, and works as a stunt driver for TV.