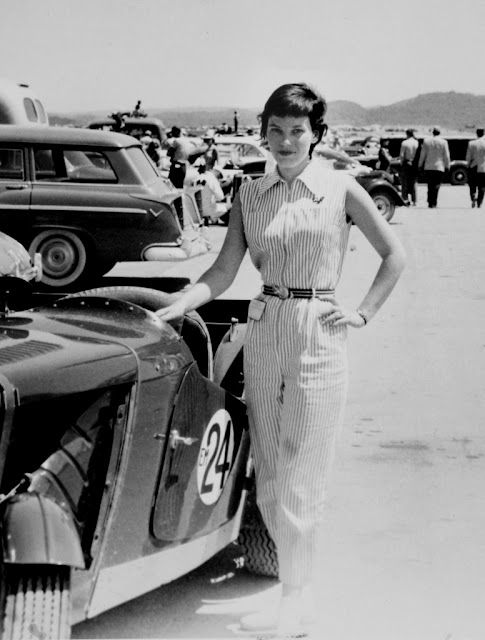 Suzy with her MG TC

Suzy Dietrich raced sportscars in and around the USA in the 1950s and 1960s. In the later part of her career, she took part in major races such as the Daytona 24 Hours.

Suzy began racing in 1953, after her marriage to Charles (Chuck) Dietrich, another racer. Away from the track, she worked as a school librarian, and the Dietrichs ran their own car dealership together.

Her first car was a supercharged MG TC, built in 1948. Her first race was at the Chanute Air Force base circuit. It was a ladies’ race, and she was fourth, winning her class. A month later, she entered another ladies’ race at Cumberland, and was second, behind the more experienced Margaret Wyllie in a Jaguar, who had started racing at the same time as Suzy.

In 1954, she scored two more second places in ladies’ races, at Cumberland and Akron. Both times, she was beaten by Margaret Wyllie again. This year, she branched out into mixed competition, entering some SCCA races at Chanute and a hillclimb at Brynfan Tyddyn. The results are not forthcoming.

Still in the MG, she achieved her first win in 1955, seeing off Margaret Wyllie in her Jaguar C-Type in a Cumberland ladies’ race. At the same meeting, she started a mixed Novices race, but did not finish. This was down to a mechanical failure. Later in the year, she ventured to Elkhart Lake for an SCCA National race at Road America, and was eleventh.

Her racing repertoire expanded further in 1956, with a new car and a first international outing. She drove a Porsche 550 in competition for the first time at the Nassau Speed Week in the Bahamas. In the Ladies’ event, she scored a third and a fourth place. The 550 was probably not hers, although she seems to have picked up its workings quite well. She would later claim that this was her favourite of all of her racing cars.

Among the other women she encountered on the Ladies’ racing scene was Denise McCluggage, who later described her as “an enormously cute librarian”. The two became lifelong friends.

She had some more races in at least two different Porsche 550s in 1957, earning three second places in Ladies’ races, and a twelfth in mixed competition at Watkins Glen, during the SCCA Nationals. This year, she had another new car, in the shape of an Elva MkII which belonged to Chuck. Suzy won a Ladies’ race at Watkins Glen in this car, as well as contesting some SCCA races. At the end of the season, when Nassau Speed Week rolled round again, Chuck and Suzy were supported by the Elva factory. Suzy was fifth in one of the Ladies’ races, but crashed out of another, damaging the car but escaping serious injury herself. She attempted to race again the next day, despite Chuck having to help her out of bed.

The Elva served her well again in 1958, helping her to Ladies’ wins at Dunkirk and Watkins Glen. This was the car she used in the Road America 500 Miles, sharing it with Charles Kurtz. They were eleventh overall, and second in class. At various times, she also raced Bernard Vihl’s 550; her best result in this car was a third in a Ladies’ race at Cumberland.

The next two seasons were much quieter for Suzy. The Dietrichs took delivery of at least two new Elva models, a IV and a V, which she used to good effect in a select few Ladies’ races.

It was back to a fuller competition schedule for 1961, and with a new car. The Dietrichs had acquired a Porsche 356, in which Suzy attacked the SCCA National championship. This time, it was mostly in the main races, rather than against the other women. Her best finish was fifth, at her lucky circuit, Watkins Glen. Mid-season, she dusted off the Elva and won the Ladies’ race at Dunkirk in it.

In 1962, she switched to single-seaters and campaigned a Cooper in Formula Junior in the States, among other cars. She used an Elva FJ much of the time, and was eleventh in the Governor’s Cup at Marlboro in this car.

The Cooper proved to be another good car for Suzy; she won a Formula Junior race outright at Dunkirk in it, in June 1963.

For the next couple of seasons, things were quieter on the racing front for Suzy. She was absent from the major entry lists until 1966, when she made quite a dramatic comeback, entering her first Daytona 24 Hours. She was part of an all-female team with Janet Guthrie and Donna Mae Mims, driving a Sunbeam Alpine for the Autosport team. Suzy enjoyed driving European cars, like the Porsches and the Cooper, so the Alpine probably suited her. The car was not a highly-tuned race machine, being barely more than showroom trim. Suzy and her team-mates finished the race in 32nd place, and were the only team in their class to finish at all.

In 1967, the all-woman team had become the “Ring Free Motor Maids”, sponsored by the Ring Free oil company. Suzy narrowly missed out on a spot in the main “Motor Maids” car for Daytona, a Ford Mustang, but raced a satellite Jim Baker ASA 411, which was another production car, albeit provided by the factory. Her team-mate was Donna Mae Mims. They were not classified. They raced the same car together in the Sebring 12 Hours, and were 25th, not far behind Liane Engeman and Anita Taylor in a Matra Djet, the other Ring Free ladies’ car.

Ring Free also supported Suzy in some single-seater races, driving a Lotus 20. She raced in Formula A and Formula Continental. She had been competing in the Lotus since at least 1965.

At about this time, Suzy and Chuck went their separate ways and eventually divorced. This was one of the reasons why Suzy’s racing career really wound down after 1967. According to friends, she regretted the end of her relationship. She went back to working as a librarian, although she did make a comeback as a team owner in 1970, running a Brabham BT21 in Formula Continental under the “Team Suzy” banner.

She died in 2015 after a stroke, at the age of 88. For the last few years of her life, she lived in a care home, and in 2011, she auctioned off her memorabilia collection to pay for this.