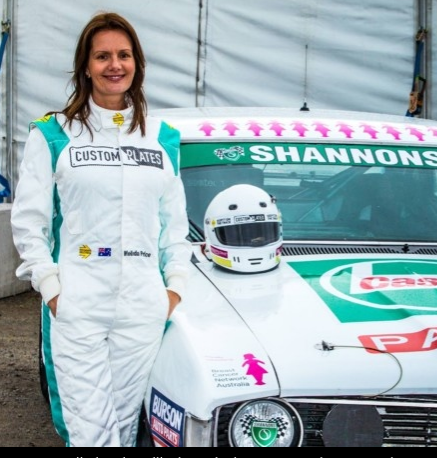 Melinda Price is an Australian saloon car racer. She has completed five Bathurst 24 Hour races and jointly holds the record for the highest all-female team finish.

She was 12th in the 1997 event, driving a “Castrol Cougar” Holden Commodore with Kerryn Brewer. During the 1997 and 1998 seasons, the pair competed together on and off.

She has raced in a number of saloon championships in the 1990s, beginning in 1992. Her first major race was the 1992 Bathurst 12 Hours, the second running of the race. She had her first experience of an all-female team, driving a Nissan Pulsar run by Garry Rogers Motorsport with Michelle Callaghan and Tracey Taylor. They were fifth in Class B.

That year, she also contested the Sandown 500 with Steven Richards. They were driving a Garry Rogers Pulsar.

Melinda was part of the Garry Rogers setup for another season, and drove the team’s Pulsar in the 1993 Sandown 6 Hour race. She was was 17th, sharing the car with Paul Fordham and Steven Richards.

She moved teams to Inspired Racing for 1994, driving their Toyota Corolla. The team entered her into that year’s Bathurst 1000, with Garry Jones and Andrew Reid. They did not finish.

Driving solo in 1995, she tackled the first rounds of the Australian Super Touring Championship in the Corolla, although she was unable to start one of her races. She was twelfth in one race at Calder Park. Earlier in the year, the team had run her in a couple of rounds of the Gold Coast Super Touring series. This yielded a thirteenth place and a DNF at Surfers’ Paradise.

In between top-line Australian Touring Car drives, Melinda took part in the Mazda 121 Challenge in 1996. This was a one-make series for female drivers. She was second in the championship, behind Tania Gulson. Her future team-mate Kerryn Brewer was one of her rivals.

The team that hosted the Castrol Cougars had been a feature of Australian racing for a few seasons before 1997, managed by Larry Perkins and usually running under the Perkins Engineering banner. The idea for an all-female team came from Castrol’s marketing department and Perkins, who usually raced for the team himself, got on board.

The Cougars car was a third Perkins Engineering entry for the Australian Touring Car Championship. It had won the 1995 Bathurst 1000, driven by Perkins and Russell Ingall.

The Cougars were originally a four-woman team consisting of Melinda and Kerryn, plus Michelle Fielke, an international netballer, and Kim Watkins, a TV presenter. Michelle was prevented from racing by her prior sporting commitments and Kim also dropped out. Melinda and Kerryn alternated driving duties.

Melinda did six of the ATCC races, competing at Wanneroo and Oran Park. The latter was the better circuit for her, and she earned her best finish there: a thirteenth place.

The two Cougars drove together for the big V8 Supercar races. They were a twelfth at Bathurst, just behind former F1 world champion Alan Jones in a Ford. The pair were also 17th in the Sandown 500.

Melinda took on nine rounds of the ATCC in 1998, with Kerryn taking a small step back and doing six. Her best result was 18th at Melbourne, and she was 41st in the championship.

Again, she did better in the longer endurance races, sharing the car with Kerryn. They were fourteenth in the Sandown 500, and a career-best eleventh in the Bathurst 1000.

In 1999, she drove in the Production category of V8 Supercars, using a K-Mart-sponsored Holden Vectra. The Castrol Cougars team had now been disbanded, having run as “Castrol Perkins Racing” in 1998. Driving solo, she was second in Class D.

She also had a couple of runs in the main V8 Supercar draw, now running as the Shell Championship. She drove a Holden Commodore for Clive Wiseman Racing and partnered Dean Lindstrom for the two races, the Queensland 500 and the Bathurst 1000. They were 20th and 17th respectively.

Clive Wiseman’s team gave her another drive for the Bathurst 1000 in 2000. Her car was a Holden Commodore, shared with her 1999 team-mate, Dean Lindstrom. They were 20th overall.

Melinda also drove a Holden Vectra for Gibson Motorsport in the Production Car Championship. She was fourth in Class E. At one point, she shared Peter Boylan’s Honda Integra Type-R for the Supercheap Showroom Showdown 3 Hours. They were 32nd overall.

After 2003, she retired from the circuits for a long time. She became a mother in 2011 and was diagnosed with breast cancer during her pregnancy. This meant she had to prioritise her health and personal life for a long time.

In 2014, she made a comeback, after eleven years. She raced a classic Lotus 20/22 single-seater in the Phillip Island Classic series, finishing 21st in the championship.

She continued to race this car for a couple of seasons and was 21st in the 2016 Phillip Island Classic. The year before, she was thirteenth in the Australian Formula Junior championship.

Saloons were still on her agenda. At the 2016 Ken Leigh 4-Hour Classic Enduro, she joined Team Brock and raced a Holden HQ Kingswood, but did not finish.

In 2017, she raced a Ford Falcon in the Touring Car Masters series and earned a third and fourth place. She picked up the same at Sandown in the GT Trophy Series, driving a Mazda 3 with Liam McLellan.

She took another year out in 2018 to complete a degree, but plans to return.