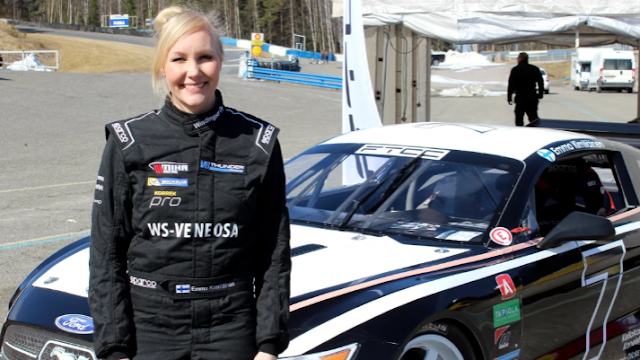 The early part of her career was spent in single-seaters, after beginning karting at the age of three. She first raced cars in 2005, in Finnish Formula Ford, coming second overall and winning a string of rookie awards.

As well as the Finnish title, she was also fifth in the Northern Europe Formula Ford Championship, and did some races in the Swedish series.

She missed out on a Finnish Formula Ford title in 2006, finishing second again, and it was an even more close-fought thing in the NEZ series. Emma was tied for points with Sami Isohella of Finland at the end of the season, but he edged her out with five wins to her four.

In 2007, she switched to sportscars and was consistently in the top three in Swedish Formula Radical. Her three wins were enough to cement her third place in the championship, as well as a runner-up spot in the National class. She was supported by Swedish ex-Formula 1 driver Stefan Johansson.

She competed in German Formula ADAC in 2008, after undertaking a DTM test during the off-season for Audi. The German marque supported her in this after she was unable to get a DTM race seat.

Her overall result was tenth, with a single podium finish: a second place at Assen. Most of her finishes were in the top ten and she out-performed her Van Amersfoort Racing team-mate, Marcus Eriksson. Daniel Abt was another of her rivals.

In 2009, she travelled to the UK to race in Formula Palmer Audi, after a successful test. She was the series' fastest female driver, with two seconds and two thirds, and a fifth place overall. This came after a difficult start at Brands Hatch, the only time she finished out of the top ten. She was racing against Felix Rosenqvist, Josef Newgarden and Maria de Villota.

She was set to return in 2010, but does not appear to have raced, although she did test for the Charouz AutoGP team.

She was not involved with motorsport for a long time after that. Partly this was due to the ever-present sponsorship problem, but she used her time away to finish her education, get married and become a mother. The result was a degree in chemistry and two daughters. She was also briefly involved in politics in Finland.

She came back to motorsport in 2014, driving a Saab 9-3 in the Scandinavian Touring Car Championship. She had an eventful season, crashing into Prince Carl Philip of Sweden in her first race, at Knutstorp, then crashing again, at Göteborg. One high point was a second place at Falkenberg, and she did manage some other top tens. She was eleventh overall, admitting herself that she was out of practice.

A second season in Scandinavian Touring Cars ran more smoothly, with a more consistent Emma finishing seventh overall. Her best finish was third, achieved at Mantorp Park and Anderstorp. She earned four more top-five positions and only had one DNF all season.

She raced a SEAT Leon in the 2016 STCC, but unreliability problems struck. Her best finish was a sixth place at Anderstorp. After the tenth race, she left the championship abruptly due to issues out of her control, leaving her in eleventh place. She had already missed another round earlier in the season.

For 2017, she announced that she would be taking part in a new electric racing initiative, Electric GT: this did not come together in time.

Instead, she drove a thirsty Ford Mustang in Thundercars, in Sweden and Finland. She won two of her six races in Finland, and finished the rest on the podium. She earned one podium in the Swedish series; a second at Ahvenisto.

Emma was set to race a Tesla P1000D in Electric GTs from late 2018, but it is unclear whether this happened. She did not race much at all that year.

In January 2019, she made the cut for the s female-only W Series, hoping to resurrect her single-seater career. Her season was one of contrasts; she was punted off by Megan Gilkes in the opening race and later had to sit out a round due to delayed concussion, but she got stronger as the season went on, winning at Assen and finishing second at Brands Hatch. She was fourth in the championship.