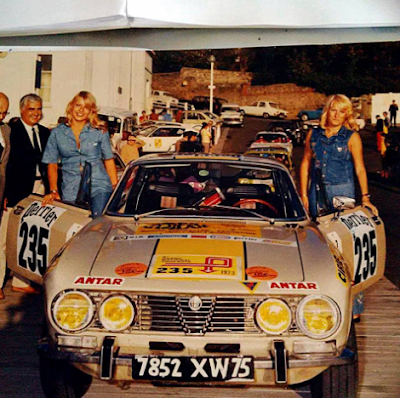 Martine Renier is a rather enigmatic driver who competed in both circuit racing and rallying in and around France in the 1970s.

She was probably a more prolific rally driver, but she showed considerable skill on the track and was trusted in major endurance races.

She entered Le Mans twice, in 1974 and 1976, driving a Porsche both times. She was thirteenth in 1974, driving with Anny-Charlotte Verney and Pierre Mauroy. Her second attempt gave her an 18th place, fourth in class, with Thierry Perrier and Guy de Saint-Pierre.

Her association with the Alfa marque was quite a long one and encompassed circuit racing as well as rallying. In 1974, she drove in two separate 2000 GTVs in the Spa 24 Hours, finishing fourteenth with Eric Mandron and Edgar Gillessen, and seventh with Guy Deschamps and Jeannot Sauvage. Both cars were run by Promoteam. She raced the same car in a round of the 1974 French touring car series at La Chatre, finishing fourth in Group 2.

Her rallying career is harder to follow, mainly because she did not often enter under her own name. Throughout her career, she used the nickname “Tintin”, a moniker she still uses when posting online about her experiences. Her regular co-driver Marie-Dominique Cousin went by “Marie Do”. “Tintin” also appeared on the circuits and it is under that name that her 1974 Spa achievements are recorded.

Alfa Romeo features in her rallying history but her first car seems to have been a Renault 8 Gordini, which she used in 1970. She and Joelle Godart were 16th in that year’s Chauny National rally.

In 1974, “Tintin” and “Marie Do” finished the Criterium International Saint-Amand-les-Eaux in a familiar Alfa. They were 35th overall.  This was far from their only rally together.

The following year, Martine made a rare foray outside France for the Morocco Rally, driving an equally unfamiliar car: an Opel Ascona. She and co-driver G Nault did not finish.

Unusually for a French female driver of the time, she never seems to have driven for Team Aseptogyl, although Marie-Dominique Cousin certainly did later.

Although quite a prolific driver, a lot of Martine’s rally experience came from the navigation side. She finished the 1973 Monte Carlo Rally with Jean-Claude Lagniez, driving another Alfa GTV, having already sat alongside him in an Alpine-Renault for French rallies. Her first experience of the Ascona came as a co-driver to Bernard Vautrin on the 1973 Le Touquet Rally. In 1976, she was hired by Ford France to sit alongside Anny-Charlotte Verney in an Escort, and they did the 1000 Lakes Rally together. Her last major stage event seems to have been the 1976 Bandama Rally, which she failed to finish in a Toyota Trueno with Alain Cerf driving.

Towards the end of her international career, she entered the 1974 Paris-St. Raphael women’s rally, finishing ninth in an Alfa 2000 GTV with Marie-Madeleine Fouquet, driving as herself for a change.


Her last attempt at a big international race was Le Mans in 1978. She attempted to qualify in a Lola T296/7 with Pascale Guerie and Anna Cambiaghi. This would have been her first race in a prototype, but they were only on the reserve list and did not actually race. Only Anna Cambiaghi drove the car.


She also competed in early runnings of the Paris-Dakar rally, as a motorcyclist and driver. Her experience in Morocco and the Ivory Coast would have helped her, although her first attempt in 1979, riding for the Moto Guzzi team, ended in a crash.

She co-drove for Catherine Dufresne the following year in a Range Rover, again not finishing. Back in the driving seat, she piloted a VW-engined Sunhill buggy in 1983, navigated by Babette Schily. Neither of the two Sunhill buggies finished that year.