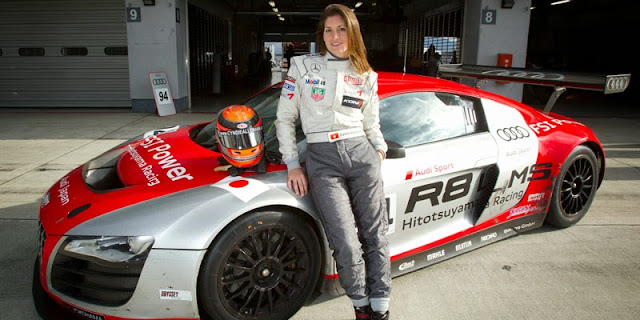 Cyndie is a Swiss single-seater racer, currently based largely in the USA. She began karting in 1998 and went on to win two Swiss junior championships. She moved up to cars in 2004, making her debut in Formula Renault in Germany. She contested the Swiss and German championships, staying mostly in the Swiss series. Her final result was fourth, after third places at Varano and Most and a fastest lap at Varano. In the German championship, she was 37th, but she had only driven at two meetings.


In 2005, she made the jump up to competing in German Formula Renault full-time, with some extra races in the Formula Renault Eurocup. She was considerably more successful in the German series this time and was twelfth overall, despite not visiting the podium during the season. In the Eurocup races, she struggled for pace somewhat. Her best finish was seventeenth, at Oschersleben.


She was ninth overall in German Formula Three in 2006 and had a best finish of second at the Lausitzring, after starting from pole. The second Lausitz race gave her a third. The rest of her season was a mixed bag, but she did manage a further ten top-ten finishes. Her next-best result was fifth, at Salzburg. That year, she was driving for the Seyffarth team, supported by the Mercedes Junior team.


The Mercedes connection continued through 2007. Her move to the F3 Euroseries, driving for Manor, was not overly successful. Her best finish was tenth at Mugello, mid-season, but Cyndie was plagued by retirements, and rarely came close to the top ten again. She managed a twelfth and a fourteenth in the next round at Zandvoort, but the rest of the season consisted of retirements and lower finishes.


However, the Euro F3 season led to a deal to run in the Champ Car Indy Lights championship in 2008. She had a promising debut year, including a fourth-place finish at Lexington and three more top-ten places at St Petersburg and Watkins Glen. She was fourteenth at the end of the season, having had an up-and-down but mechanically trouble-free time.


After 2008, Cyndie's Indy Lights deal came to an end. She couldnot find another race seat and spent the first half of the season karting in the States and Europe. Later, she returned to Germany and took part in two rounds of the ADAC GT Masters at the Nurburgring. She was driving a Porsche 911 GT3 Cup for Buchbinder Rent-A-Car and was seventeenth in one race, retiring from the second.

In 2010, her career got back on track, but taking a different direction. She was signed up by the Matech sportscar team to drive the Ford GT. This is an FIA GT1 car, the fastest of the closed GT classes. Cyndie did not partake in a full season, but raced in some rounds of the FIA GT1 championship and the Le Mans Series. Her first race was the LMS event at Spa-Francorchamps, and she, Rahel Frey and Yann Zimmer were an excellent third. A little later, the team paired Cyndie and Rahel up with Natacha Gachnang for the FIA races. They were less successful, only managing an 18th and 22nd place at Brno.

This was all preparation for the team's main event: the Le Mans 24 Hours. Matech was entering the first all-female team since 1991, driving an iconic car. The team was all Swiss, also. Sadly, a fire put the GT out of the running quite early. Although mechanics attempted a series of repairs, the team had to retire.

After that, Cyndie's career experienced a long hiatus. She was determined to continue her sportscar activities, but lacked backing and a race seat. Before 2012, she signed a deal for the i1 Super Series, driving a Radical SR3. She would have competed against the likes of Jacques Villeneuve and Karun Chandok, in events across south and east Asia and the Middle East. The championship was meant to begin in 2012, but shortly before the proposed start, it was postponed for a year. Luckily, Cyndie managed to find another opportunity, in the shape of the Japanese Super GT Series. In 2012, she raced an Audi R8 LMS with Hitotsuyama Racing. In the end, she only completed five rounds of the eight. Although she did not achieve any podium positions, she proved a capable driver, with top-ten finishes to her name.

She also drove in one round of the Malaysian Super Series, in a Ginetta G50Z GT3. She and Samson Chan won the GT class.

2013 was mostly spent doing TV work in Germany, including making a programme about the Nürburgring. This led to a drive in the Nürburgring 24 Hours. Her car was a Mercedes SLK and her team-mates were Thorsten Drewes, Sven Hannawald and Bertin Sing. The first two were also making the Nürburgring show with Cyndie, which was called "Destination: Green Hell". Although they were running mid-field in their class after a bad start and heavy rain, a crash put them out before the end.

2014 was spent doing media work, testing, and driving instruction. Cyndie returned to the circuits in 2015, in the Dubai 24 Hours. She was driving a SEAT Leon Supercopa as part of a five-driver Stieglitz team. They were 79th overall, and fourth in class.

Since then, she has concentrated on development and TV work.