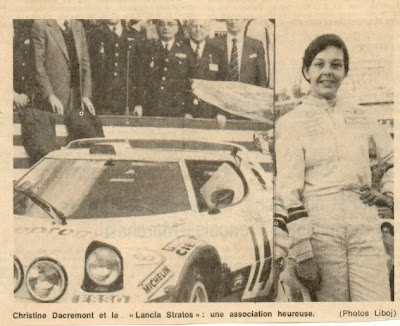 Christine Dacremont was a French rally driver and sportscar racer of the 1970s. She competed between 1970 and 1979. She began her career in hillclimbing in 1970, and her first competition car was a Triumph Spitfire. She used the same car in her first rally, the Rallye Fleurs et Parfums at Grasse, also in 1970.

The Triumph was replaced with an Alpine-Renault A110 for 1971, which Christine used in French rallies. Her early results were solid, but unspectacular, the highlights being class seconds in the Rallye D'Ouest and the Paris-St.Raphaël women's rally.

In 1972, she joined Team Aseptogyl as one of its all-female driving squad. This was strangely appropriate. The team was sponsored by a brand of toothpaste and run by Bob Neyret, an ex-dentist, and Christine worked as a dental assistant when not rallying. Her first year with the team was spent in the French championship. She carried on all year, despite being on crutches for part of it, due to a motorcycle accident. Away from the team, she entered her own A110 in the Tour de France, but did not finish.

She continued with the team for the 1973 season. One of her more major outings was the Paris-St.Raphaël, in which she was fourth, in a Fiat 124 Spider. Her biggest rally of the season was her first World Championship event, the Monte Carlo Rally. Co-driven by Marie-Odile Desvignes, she retired before the finish, after the engine of her A110 developed problems. For the rest of the season, she continued to gain experience at home with the Aseptogyl set-up.

The following season, Christine gained her first experience of long-distance events. Driving a Peugeot 504, she took part in a rally raid across the Sahara, followed by the Bandama Rally on the Ivory Coast. She was not among the winners, but the experience stood her in good stead for the World Cup Rally later in the year. The route ran across the Sahara and through Europe to Munich. Christine was second in her Peugeot.

1975 heralded her return to the World Championship stages in Morocco. Unfortunately, she and Marie-Pierre Palayer crashed their Peugeot 504 and had to retire. Luckily, despite the proximity of dates, this did not interfere with Christine's first attempt at Le Mans. She was part of the Moynet-Simca team that won the 2000cc class. Her team-mates were Michele Mouton and Marianne Hoepfner. They were 21st overall.

In 1976, she won two French rallies, in Ardennes and Chataigne, at the wheel of an Alpine A310. On the world stage, she was eighth in the Rallye du Maroc and fourth in in the gruelling Bandama Rally, in a Peugeot 504. During her career, Christine proved that she was much more comfortable in endurance events, and on rough terrain. This year, her co-driver was Yveline Vannoni, who was previously the navigator for Marianne Hoepfner. Later in the year, Christine tried out a Lancia Stratos rally car, having sampled Stratos power in her second Le Mans. She partnered Lella Lombardi, and was 22nd, second in class.

The following year, she was sixth in Monte Carlo, driving the Stratos with Colette Galli. This remains one of the highest female finishes to date. The Stratos brought less joy at Le Mans: Christine and Marianne Hoepfner retired after only five hours with engine trouble. More trouble struck on the World Cup Rally, which was the most ambitious yet, running from London to Sydney. Team Aseptogyl entered two diesel-powered Fiat 131s, one for Christine and Yveline and one for Marianne Hoepfner and Bob Neyret. Christine was involved in a serious accident near Darwin and spent three months in hospital recovering, wiping out the rest of her season. Thankfully, she made a full recovery.

She returned to the stages once more in January 1978, for the Monte Carlo Rally. Her car, still run by Team Aspetogyl, was a diesel Citroen 2500 CX. She was off the pace in 69th, but not far behind the first diesel finisher, Claude Laurent in a Volkswagen. She also entered the Tour de Corse in a smaller, more proven Fiat 127, but did not finish after an oil line broke.

1978 also saw her last Le Mans appearance. She and Marianne Hoepfner drove a Peugeot WMP P76 prototype run by Aspetogyl. They lasted until the 19th hour, before a head gasket blew. Throughout the latter part of their careers, Christine and Marianne often drove together, sometimes navigating for one another in French rallies. Christine read the maps for other Aseptogyl drivers on occasion, including Corinne Koppenhague.

1979 was her last year of competition. Her main event was the Paris-Dakar Rally. She drove a Lada and does not appear to have finished. Team Aseptogyl did not last much longer, disappearing at the end of the season, although Bob Neyret returned in 1983 with an all-female driving squad for the Monte. Christine was no longer a part, nor were any of the previous major Aseptogyl drivers.