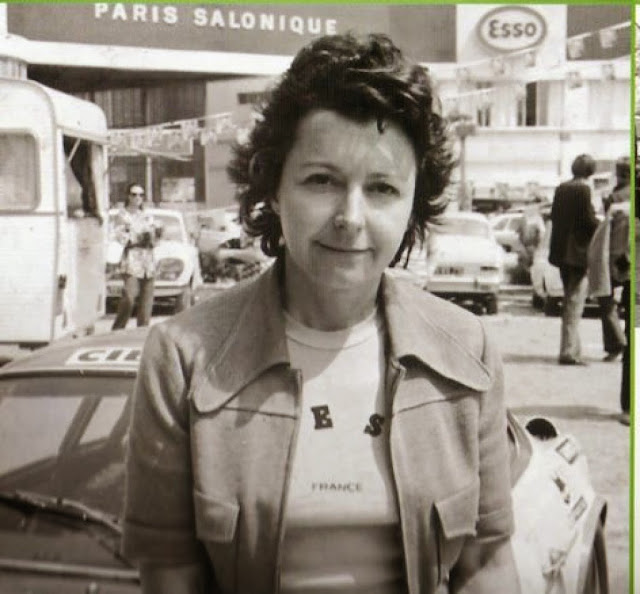 Claudine was a multiple French champion, active from the 1950s to the 1970s. She won the French national title nine times, between 1960 and 1968, with the Citroen and Lancia teams. During this time, her participation in non-French events was mostly as co-driver to her second husband, René Trautmann.

She was not from a motorsport background, but a generally sporting one. Skiing was her sport of choice before taking up rallying. She was working in her father’s clock business when she entered her first rally, driving her own Simca Aronde. This was at the suggestion of a friend, who worked as a Simca dealer, who had noticed Claudine’s flair for driving. She was a surprising fourth overall, and first in the Touring class. This was no local club rally either, but the Mont Blanc International Rally. In order to even enter, she had had to engage the services of Lise Renaud, an experienced navigator with the correct license. An entry in the Rally of Beaujolais followed, which led to a drive in the Tour de Corse, encouraged by René Cotton. Sadly, the Aronde lost a wheel early on.

1960 saw her take another step on the road to international rally glory. Another meeting with René Cotton led to a seat with the Île de France Citroen team, after coming third in class in the Austrian Alpine Rally. Coupes des Dames followed in the Mont Blanc, Cévennes and Armagnac rallies, but her best result was probably an eighth place overall in the Liège-Rome-Liège marathon rally, driving a Citroen ID19 with Renée Wagner. Earlier in the year, still in the Simca, she had finished her first Monte Carlo Rally, in 38th place. At the end of the year, she was French ladies’ champion for the first time.

The association with Citroen continued for another three years. In 1961, she drove alongside Ginette Derolland, and came to the end of the Monte once more. Her second outing in the other major French rally, the Tour de Corse, gave her a Coupe des Dames this time, and she added more ladies’ trophies for French rallies to her collection. Her best result was a fourth overall in the Rallye Neige et Glace. Away from the stages, she competed in the last running of the Mille Miglia, and won the Coupe des Dames, in an ID19 with Renée Wagner. With Mlle Kissel, she won the Coupe des Dames in the Touring class of the Tour de France, finishing sixth overall in class.

Claudine carried on driving the Citroen ID19 in 1962, gaining more and more experience. The Liège-Sofia-Liège rally gave her another Coupe des Dames, but no top ten. A string of fastest lady awards in French rallies ensured that she kept her Ladies’ title. 1963 was a more exciting year, with two top-ten finishes in major international rallies: sixth in Corsica and third in Catalunya. She also won the Coupe des Dames in the Spa-Sofia-Liège and several big French rallies, including a seventh Mont Blanc ladies’ award.

Away from the stages, she was also very busy. She had befriended Marie-Claude Beaumont, who would become her regular navigator for a while, then go on to much bigger things, on the circuits as well as the stages. She had also become close to her fellow Citroen driver, René Trautmann, and practically ended her marriage to Patrick Vanson, although the couple would not divorce until later.

It was all-change in mid-1964. Claudine and René both moved to the Lancia works team. Initially, they were both taken on as drivers. After another finish on the Monte in a Citroen DS19, Claudine set about defending her French title, and increasing her international tally. This year, she debuted at San Remo, in a Lancia Flavia. She also finished strongly in French rallies, with a class second on the Alpine Rally and a class third on the Neige et Glace event, one of her favourites. This year saw her first win: the Paris-St. Raphaël ladies’ rally.

The following year, the pace of Claudine’s career changed. Although she was still a fixture on the French rally scene, her involvement in international events decreased, as a driver at least. She began navigating for René on a regular basis, still with Lancia. They scored their first win that year, on the Alpine Rally.

This arrangement continued until 1969. During this time, Claudine still performed well in French rallies, winning four more Paris-St. Raphaël events and repeating her débutante finish in the Mont Blanc Rally in 1968 with a fourth place. She was also third in the Forez Rally that year, and had been fifth in the Rallye Pétrole the year before. However, for major events, she travelled with René and acted as his navigator. In 1967, they got married. By 1969, she was in semi-retirement, and did very little driving, apart from a few road races. This was the first year for nine years that she did not win the French Ladies’ title.

Her international career began again with a drive for Citroen, in the World Cup Rally. She managed to get a good deal of the way from London to Mexico City, and although her car broke down in Colombia, 1000 kilometres from the finish, she was classified 24th.

At about the same time, a new enterprise in French rallying brought her back into the fold. Robert Neyret was putting together his Team Aseptogyl, an all-female rally-driving force in pink, toothpaste-sponsored Alpine-Renaults, and persuaded Claudine to take part. Eventually, she would manage the day-to-day running of the team, alongside René in a business capacity. However, to begin with, she was one of the drivers, and even joined in with the promotional activities, matching colourful outfits and all. “Les girls” of Team Aseptogyl competed around France from 1971 onwards. Claudine drove in that year’s Tour de France, with Marie-Odile Desvignes. Her best result was a fifth place, in Bayonne. She also navigated occasionally for Neyret himself.

﻿﻿She only really excelled again in international events after 1971, when she was third in the Bandama Rally in a Renault 16. Desert events seemed to be her favourite, despite her background on the Tarmac of the French stages. She was sixth in the 1972 Moroccan Rally in a Renault 16 TS, after failing to get to the end of the Monte in an Alpine-Renault A110. The following year, she was eighth in the Bandama and tenth in that year’s Moroccan event, driving a Peugeot 504 run by Team Aseptogyl. Her co-driver that season was Marie-Pierre Palayer.

One of her last major events was the 1974 World Cup Rally, which ran from London to Munich via the Sahara desert, in which she was fourth, driving a Peugeot 504. It was another Aseptogyl entry, and her navigator was Marie-Odile Desvignes. Back at one of her more fruitful stamping grounds, she was eighth in Morocco in 1975, the year she retired into team management. She was 44.