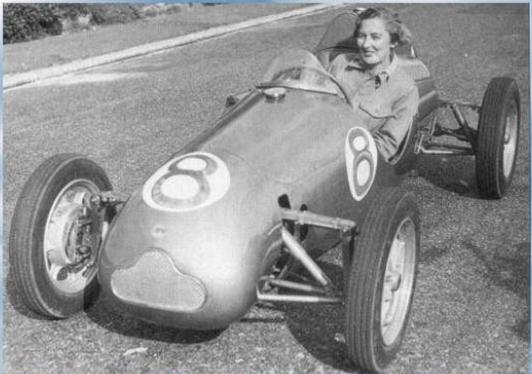 Betty Haig was born in 1906, the great-niece of Field Marshal Haig. She learnt to drive at an early age, and by sixteen, owned her own car. When she was old enough to drive legally, she moved through a series of increasingly sporty cars, including a Salmson and a Singer Le Mans.

Despite this interest, it was not until she was 29 that she entered her first motorsport event: the Paris-St. Raphaël Rally in 1935. She drove a Singer, partly backed by the factory, in exchange for reporting back on its performance. The Paris-St. Raphaël was chosen after Betty had seen it advertised, whilst travelling in France.

She was the winner of the 1936 Olympic Rally, driving a Singer, once more supported by the works team. This rally was centred on Berlin, tying in with that year’s Olympics. The car ran perfectly throughout the event, although it broke down on the way home from Germany. It is recorded in some places as the only car to have won an Olympic medal.

She is reported by some sources as having won the Paris-St Raphaël rally in 1937, on her third attempt, in an MG Midget. However, this is contradicted by some reliable sources. Betty’s win may have come in 1936, as there is a gap in the records there. If this is so, she would have been driving a Singer rather than an MG. Her other 1936 events as a Singer works driver included speed trials at Brooklands, and long-distance trials elsewhere.

In 1938, she drove in the Paris-St Raphaël again, for the last time before the war, in the MG. She was second, reportedly after being held up on a stage by another competitor.

Post-war, Betty took up motorsport once more, with even more vigour than before. Now, she was taking on major, mixed entry rallies, as well as trials and hillclimbs. In 1946, she won the 2000cc class on the Rallye des Alpes Françaises, as well as winning the Coupe des Dames, in a nine-year-old AC. Later, in 1949, she drove a Morris Minor in the Monte Carlo Rally, co-driving with Elsie Wisdom and Barbara Marshall. The same year, she entered the Rallye des Alpes Françaises again, winning the 1500cc class and the Coupe des Dames, with Barbara Marshall, in an MG TC. At this time, she was competing regularly in European hillclimbs, in her own BMW.

In 1950, she joined forces with Barbara Marshall once more for the Monte Carlo Rally, driving an MG. In 1951, she was back in the Paris-St Raphaël rally, finishing third, with a class win, in an MG TD. At some point, she is also described as having rallied a Healey 100 in this event.

Betty also raced on circuits, and partnered Yvonne Simon to fifteenth place in the 1951 Le Mans race, in Yvonne's Ferrari 166 MM. They were third in the 2000cc class, having challenged for the lead throughout.

Despite her seeming talent on the circuits, she rarely competed in major meetings, although she was a regular on the club motorsport scene in the UK. As well as circuit racing, she enjoyed a considerable hillclimb career, and held the Ladies’ record at Prescott for six years. Among the cars she owned and drove were an HRG, a pre-war Frazer Nash and models by MG and AC. In 1953, she raced an MG Magnette at Goodwood, coming third in a handicap race. In 1955 she drove in a Goodwood ladies’ Whitsun race in an AC Ace, and she raced a Climax-engined Elva in similar events the following year. It was her custom to favour British vehicles.

She continued to race and rally numerous cars until 1967. As time progressed, she stuck with the machinery of her heyday and was a regular on the burgeoning historic circuit. Her last competitive outings were in the Griffiths Formula, for 1940s and 1950s international sports racers. Towards the end of her career, she was a major force for the establishment of the Historic Sports Car Club.