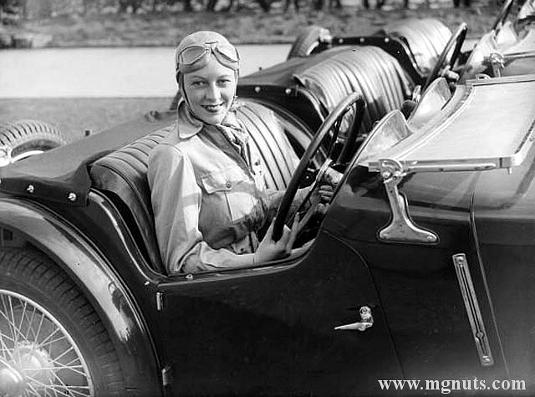 Doreen was born into a motoring family in 1916. Her two brothers, Denis and Kenneth, were both racing drivers, and their parents were long-standing members of the Brooklands set. All three Evans children learned to drive as soon as they were of age, and all three got their start in motorsport very young. They initially competed together in MG J2s, in sprints, hillclimbs and trials.

Doreen raced at Brooklands from the age of 17. Apart from Ivy Cummings, who was not an official competitor, she must have been one of the youngest women to drive on the Brooklands oval. Her next racing car was another MG, a Magna L-Type, and her first major event was the five-lap handicap at the 1934 BARC meeting, in July. A couple of weeks later, she was third again, in the Light Car Club’s annual relay race. She was part of a three-woman MG Magnette team backed by the MG factory. Her team-mates were Irene Schwedler and Margaret Allan. She finished one place above her brother, Kenneth, but failed to win the Ladies’ Prize, after the Singer team of Kay Petre, Eileen Ellison and Sheila Tolhurst exploited a loophole in the rules, stating that the Ladies’ Prize, and the Le Mans entry that went with it, could not be awarded to a team in the top three. They sandbagged and finished fifth. In October, Doreen won a Ladies’ Handicap on the Brooklands Mountain circuit in an MG Q-Type, defeating Fay Taylour and Bill Wisdom.

Using a rebodied version of the Q-Type, she won the Outer Circuit race at the Brooklands March meeting in 1935. In yet another MG, an R-Type, she and Kenneth entered the Brooklands 500 Mile race, but did not finish due to valve trouble.

Despite not winning the LCC Ladies’ Prize, she was part of the works MG team for Le Mans in the summer. George Eyston was managing a three-car ladies’ team of Midgets, all three of which finished. Doreen was in the middle in 25th, driving with Barbara Skinner. The team became known as “The Dancing Daughters”, perhaps after a radio show of a similar name.

Away from circuit racing, she competed in that year’s RAC Rally, driving an MG Magnette, and scored a class win. In May, secured the Ladies’ Record at the Shelsley Walsh hillclimb, driving the 750cc MG R-Type. In September, she was involved in a battle for that same record with Kay Petre, her rival who had risen to prominence at the same time. A mistake during the final run-off gave the award to Kay, in her White Riley.

In 1936, Doreen drove the R-Type at Brooklands, finishing third in the BARC Second Mountain Handicap. She entered the Brooklands International Trophy in the same car, but suffered a dramatic accident. Her car caught fire and crashed on the Members’ Banking, although she had slowed it sufficiently to allow herself to jump out. Although she suffered only minor injuries, the car was badly damaged. She was also scheduled to compete in the Tourist Trophy in an Aston Martin, but her team-mate, Alan Phipps, crashed out on the first lap, before she got the chance to drive.

Despite this setback, she married Phipps, and moved to America with him. Like her brother Denis, she stopped racing upon her marriage. Later, she earned her pilot’s license, and took up flying.

She died suddenly, at home in California, in 1982.

(Picture from burblers.com)
Posted by Rachel H-G at 15:09