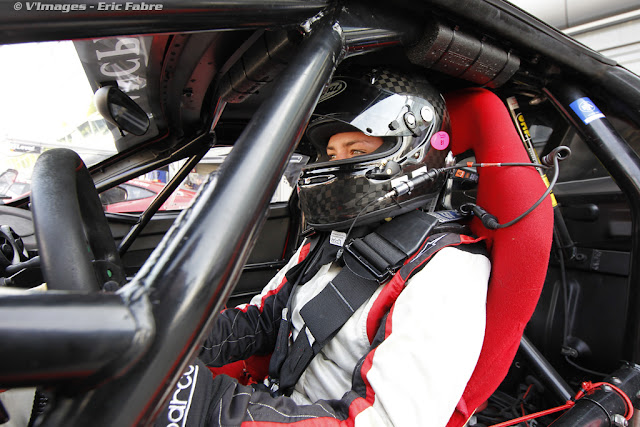 Domestic sports and GT racing series in France have attracted a decent number of women drivers in recent years. The VdeV championship for historic and modern sportscars in particular has usually had a healthy Coupe des Dames category. Inès Taittinger now has her own post.

Caroline Barclay - Frenchwoman who raced a BMW Z3 M Coupe in the French GT Championship in 1999. Her co-driver was Michel Coencas. She was not particularly successful in her racing attempts. As well as GTs, she took part in the Andros Trophy ice-racing championship. She is better known as a film actress.
Lucy Brecht - raced a Porsche in Europe between 2000 and 2009, mainly in the Pierre Martinet Trophy in France. Initially, she drove in club races as part of a family team. In 2006, she started to be more competitive, and earned herself a test with Pouchelon Racing for the European GT3 series, although she did not end up driving for the team. Her biggest achievement is a win in the Pierre Martinet Trophy, in 2008, at Dijon. Her car was a Porsche 993. In 2009, she drove a Porsche 996 in the Estoril 6 Hours, the last round of that year’s VdeV series, and won her class. She does not appear to have raced since then.

Capucine Caillet – had her first major racing season in 2014. Most of it was spent in the VdeV series, in the Funyo Cup. Driving a Funyo 5 prototype, she was 40th in the Funyo Cup, and 26th in class B. She also tried out two other VdeV categories. Driving a Caterham, she made a guest appearance in the Historic Enurance Proto Challenge. In more modern machinery, a Radical, she did one race in the Endurance GT Challenge. As these were one-offs, she did not feature in the end-of-season tables. Away from VdeV, she raced a Porsche 968 in the Trophée Tourisme Endurance, at Spa. Her team-mate was Alain Giavedoni, and they were ninth overall. Capucine has stated that she wants to try as many different cars and series as she can.
Melanie Cazzani - 2003 French Caterham racing champion. Prior to this, she raced Citroen Saxos on the circuits and took part in ice racing, sometimes using a powerful Metro 6R4. In 1998, she drove in the French GT Championship for a few rounds, and scored her first big overall result in Caterhams: a second place. Between 1998 and 2001, she drove Formula Renault 2000 events, as well as racing a Caterham with increasingly good results. Other disciplines were not forgotten; she was 16th in French GTs as well as winning her title in 2003. In 2005, she returned to Caterham racing in the Cosworth Masters, driving in some rounds with Francois Salhien. They were third at Monza. The following year, she did two races in the Peugeot RC Cup, but did not score any points.

Aurélie Chamaraud - has raced in France since at least 2002. Her usual car is a Porsche 996 Cup, which she shares with her father, Pierre. In 2002 she did contest the French GT Championship alone, but since then, she has been part of her family team. In 2006, they competed in the French GT Championship and also entered the joint British/French championship rounds. Their best finishes were a 17th at Pau and a 19th at Albi. The following year, they drove their Porsche in some Formula VdeV rounds, with midfield finishes. Aurelie also took part in the Peugeot 207 Sprint Challenge, coming 20th after a couple of visits to the podium. In 2008, Aurelie and Pierre won their regional racing championship. In 2009 and 2010, Aurelie raced in the Peugeot 207 endurance championship, sometimes solo, but sometimes with Pierre. The pair raced together in the Trophée Tourisme Endurance. They drove a BMW 130i, and were 15th in Class 3. In 2015, she managed her family team in the Peugeot 208 Cup. The following year, she and Pierre raced in the TTE saloon series, in a BMW M3.

Amandine Foulard - French driver who competes in historic and modern sportscars. She began racing in 2010, driving a Porsche 996 in the ROSCAR section of the VdeV championship. Her first award was the VdeV ladies’ championship. She continued in ROSCAR in 2011, with a best finish of third at Lédenon and a fastest lap at Dijon. This gave her another VdeV ladies’ award. In a different car, a Ferrari 430, she drove in two rounds of the Blancpain Endurance Series, finishing one of them: a third place at Monza. In yet another car, a Ligier prototype, she entered four rounds of the SPEED Euroseries with Inès Taittinger, driving for the Springbox Concept team. Their best finish was seventh, at Paul Ricard. She continued to race a Ligier for Springbox in 2012, driving with Philippe Alliot. Their best finish was fifth, achieved at Catalunya and Dijon. Away from sportscars, she also raced a Clio for Springbox at the 2011 Dubai 24 Hours, but did not finish. Her co-drivers were Cyndie Allemann, Jade Handi and Corentine Quiniou. She continued to compete in the SPEED Euroseries in 2013, finishing tenth in the championship, still in the Ligier. Her best finish was fourth, at the Hungaroring. She also made some appearances in two VdeV championships, in the same car, but was less successful.

Nathalie Genoud-Prachex – races a Lotus 2-Eleven in Europe. In 2012, she became the Lotus Cup Europe’s first female driver. This was her first season of racing, having only driven on track days previously. In 2013, she was twelfth in the championship, after a steady year with a good finishing record. 2014 was similar, and she was fourteenth overall. She had another steady, if unspectacular, season in 2015, finishing 23rd overall. 2016 was her fifth season in the series, and she was 26th. This improved to 14th in 2017, driving for a new team. She remained in 14th place for the 2018 season, then improved to tenth in 2019, with a ninth place at Assen as her best finish.
Anne-Sophie Nourry - has raced Porsches in France since 2006. After starting her motorsport career in Caterhams in 2001, winning the Coupe des Dames, she spent two seasons in the Peugeot 206CC Cup. In 2005, she did some GT racing in an MG, before joining her family’s Porsche team. Her main championship has been the French (FFSA) GT series, in which she posted a GT3 class win in 2006. As part of the championship, she also did one race in the British GT championship. In 2007, she also won the Val de Vienne Porsche club race. She continued in GTs in 2008, as well as running in a couple of Carrera Cup races. Anne-Sophie and her father and co-driver Michel won at least one FFSA event, at Dijon. The following year, they moved to the Modern GT section of the VdeV endurance championship, and drove a few races in a Porsche 997. Still driving for the family team, but in a 996 this time, Anne-Sophie made some guest appearances in the French GT Championship in 2010. 2011 was a more productive year for her: she was the VdeV Ladies' champion through the modern endurance class, driving the Porsche. She also tried her hand at rally navigation in France, which she continued in 2012. She also continued driving for Nourry Competition in the Porsche, in the VdeV championship. In 2013, rally navigation seems to have been her main motorsport activity, and this continued in 2014. She did do at least some circuit racing, including a Club Porsche meeting at Spa, where she won one race, and was fourth in another. In 2016, she continued as a navigator to Anothony Cosson, in a Porsche, helping him to win three rallies. She also did a couple of rallies herself, in a Citroen C2. In 2017, she entered the Saint-Germain-La-Compagne Regional Rally, but crashed out.

Corentine Quiniou - daughter of Carol Quiniou. She has competed in a number of disciplines, including the Peugeot THP Spider Cup in 2008, in which she came fifteenth. She drove a Chevron B16 in the 2007 VdeV series with her father, Michel, leading races at Jarama and winning their class at Barcelona. They were fifth overall. In 2008, she won the French Classic Endurance Racing championship in a different Chevron B16. She returned to the championship in 2009, but only participated in some races. She is recorded as scoring one podium place. In 2010, she did a race of the Toyo Tyres 24 Hour series in Dubai. She was eighth in class SP3 in a Nicholas Mee Racing Aston Martin Vantage, driving with the Lebanese Greg Audi and Jaleel and Tarek Mahmoud. In 2011, she was set to race again in Dubai, but did not appear. As well as circuit racing, she participated in the 2006 Dakar in a Toyota, with Florence Bourgnon. Since 2002, she has driven in the all-female Rallye Aïcha des Gazelles, winning it in 2006 and 2007. However, she was accused of cheating in 2010 and disqualified. This seems to have affected her chances elsewhere in motorsport. In 2014, she followed her mother into historic racing, and raced a Chevron B16 in the Le Mans Classic.
(Picture from http://www.endurance-info.com/2011_BES/Amandine1.jpg)
Posted by Rachel H-G at 15:20