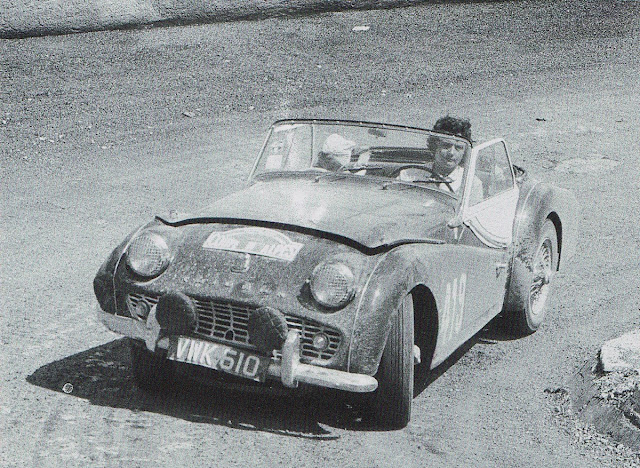 Annie competing in the Alpine Rally in her TR3


Annie Soisbault competed in rallies and races across Europe, between 1956 and 1969. She had always been interested in sports from an early age, but her first love was tennis: she was one of France’s leading junior players of her time, winning seven titles. She continued to play professionally as a senior, and is meant to have used some of her winnings to buy her first sports car, a Delahaye.

Her first international event was the 1956 Monte Carlo Rally, in a Simca. Her role was as a “second driver”, more or less a back-seat passenger to Germaine Rouault and Louisette Texier. She remained on the back seat from Munich until the Ardeche, where the team struggled with heavy snow. Annie demanded a go at the wheel, and surprised her more experienced team-mates by setting some good times and passing several other drivers. However, her heroics were not enough to save them, and they were still unclassified.

In 1957, she took to the stages in her own Triumph TR3. The biggest rally she entered (and not strictly a rally) was the Tour de France, and she was 21st overall, driving with Michèle Cancre. There were 23 finishers that year. In the same car, she entered the Coupes de Salon at Montlhéry, and was eighth in her race.

In a Panhard Dyna belonging to her co-driver, Monique Bouvier, she also entered the Mille Miglia. They lasted a little over half of the distance, before a problem with a piston put them out.

She became a Triumph works driver in 1958, using a TR3. The story goes that the Triumph motorsport team were considering Annie or Pat Moss for a works drive. Annie told them that she was not interested in working with indecisive people, and they signed her forthwith. It is unclear how much truth is in this story. Annie had a talent for self-promotion; an example of this is her appearance in the promotional Shell film “Coupe des Alpes”, which featured some competition footage and some staged sequences, and was shown on television. She was also regarded by some of her peers as “difficult”.

That year, she seems to have finished the Monte Carlo Rally with Tish Ozanne, albeit unplaced. She also entered the Alpine Rally, but retired due to mechanical problems. The Tour de France was a happier hunting ground. She was fourteenth overall with Michèle Cancre.

In 1959, she continued with the TR3, coming to the UK for the RAC Rally. Co-driven by Val Domleo, she finished, but was unplaced. It had been a similar story on the Monte, although Nadège Ferrier took the co-driver’s seat. Once again, she did not finish the Alpine Rally. Her biggest result was her win on the Paris-St. Raphaël women’s rally, which contributed towards her European Ladies’ Rally Championship title. This award was not without controversy; Annie seems to have exploited a loophole in the rules about the number of female participants in an event for a Coupe des Dames to be awarded, non-starting on some rallies in order to deny Ladies’ points to Pat Moss, her main rival apart from Ewy Rosqvist, who was joint winner. This behaviour did not endear her to other competitors, or to observers.

In more sportscar-oriented competition, she was thirteenth in the Tour de France, once more with Michèle Cancre as co-driver.

1960 saw her association with Triumph coming to an end. She failed yet again to finish the Alpine Rally, this time with Annie Spiers. Throughout her career, Annie preferred to work with other female drivers. This was true in both rallies and races. This year, she revisited her partnership with Michèle Cancre for the Tour de France, and was 16th. Their car was a Porsche 356B. Earlier in the season, driving solo, Annie had attempted the Coupes de Vitesse at Montlhéry, and was thirteenth in a Triumph. At some point during 1960, she travelled to Brazil for the Rio de Janeiro Grand Prix, and was seventh in a sportscar race, driving a Porsche 1600. This season, she also sampled single-seater racing in a Lola Formula Junior, which she used in some Formula Three races in France.

Increasingly, she favoured sportscar events and road races over stage rallying, and this seems to have been her main focus for most of the 1960s. She took part in the Tour de France on several more occasions, with a best result of sixth in 1963, driving a Jaguar, the same car in which she had failed to finish in 1962. She also scored her best result in the Monte Carlo Rally, fourteenth, in a DKW, with P. Gele, but seemingly as a navigator.

She was fourth in the 3000cc GT class the following year, in a Ferrari 250 GTO. Her overall position was fourteenth, and her co-driver was Nicole Roure. Driving a different Ferrari, an LM run by Ecurie Francorchamps, she was 18th in the Paris 1000km, driving with Guy Ligier. Her main car that year was a Porsche 904. In it, she was thirteenth in the Rheims 1000km, with Claude Dubois, and sixth in the Paris GP at Montlhéry. She is known to have entered the Dakar 6 Hours, but the result has been lost.

The Ecurie Francorchamps Ferrari was her main mount for 1965. In it, she entered the Monza 1000km, Spa 500km and Rheims 12 Hours, but did not finish any of them, due to mechanical failures and one accident, at Rheims. Her only good result came in the Paris GP, where she won the GT class in her own Ferrari GTO. In the same GTO, she also attempted a round of the French national rally championship, but did not finish.

She drove a Porsche 906 in 1966, staying in France this time. She is known to have entered the Coupe de Vitesse and the Coupe du Salon, but the results are not forthcoming. A scheduled appearance in the Paris 1000km did not happen. After this, Annie became very much an occasional racer, and concentrated on her professional role as managing director of an upmarket motor dealership, importing Aston Martin and other marques to France. The business belonged to her husband, the Marquis de Montaigu.

Her last major appearances were at the Mont Ventoux hillclimb. She had been a regular at the big climbs since at least 1960, having crashed her Ferrari GTO there in 1965. In ‘66, she was not among the major finishers, but did become the first female driver to average over 100kph, driving a Porsche 906. In 1967, she won the Ladies’ Cup in the same car. She retired completely from motorsport in 1969.

Annie was a fascinating character, a sporting adventuress more in the style of Hellé Nice and Kay Petre, than her contemporaries. She is famous for her pet cheetah, which she sometimes brought with her to rallies for photo opportunities, and for her reputation as a bonne vivante, who enjoyed the finer things in life. Her furious competitive streak was not enough to land her the overall victories of a Pat Moss or Rosemary Smith, but her media-mindedness ensured that she was noticed everywhere.

Thanks to members of the TNF forum for information.