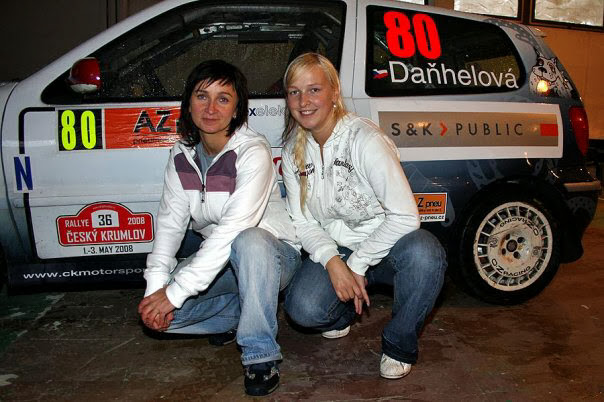 This particular corner of Eastern Europe seems to have a growing number of women participating in rallying. The Czech Women Talent driving competition, held in 2013, seems to be adding to this number.

Hana Bad’urová – Czech driver who competes in her home country in a variety of cars. She first appears in major Czech rallies in 2009, in a Skoda Fabia. In 2011, she drove a Felicia, but was excluded from the Partr Rally Vsetín. Between 2012 and 2014, she switched between a Skoda Favorit and a Honda Civic, and actually had her best finish in the Skoda: 16th overall in the Agrotec Petronas Syntium Rally Hustopeče. In 2015, she rallied a Honda Civic again, and was 61st overall in the Czech Rally Zlín. The same car and event combination followed in 2016, and she was 71st overall. She was third in that year's Czech ladies' championship.

Lucie Červenková - winner of the Citroen-sponsored “Czech Women Talent” rally driver search in 2013. She took part in five Czech rallies, mostly sprint events, in a Citroen DS3 R1, and was second in the ladies' class of the Czech Sprintrally championship. Her best overall finish was 58th, in the Rally Jeseníky. Lucie’s prize was a season in the Czech junior championship, supported by Citroen. However, she did not take it up, having decided against a professional motorsport career. The prize went to Barbora Holická. Lucie does not appear to have competed at all since 2013.

Miloslava Chomínová - driver from the former Czechoslovakia, active during the late 1970s and early 1980s. She drove a Skoda 110 R exclusively; Eastern Bloc drivers were restricted to Soviet cars. Her finishing record in local Czech events was good, with few retirements. Her best result came in 1980, when she was 16th in the Rallye Jičín. Her usual navigator was Anna Slavíková. After 1981, she disappears from the entry lists. A co-driver by the name of Miroslava Chomínová continues to rally until 1992. It is possible that these two women are the same person.

Barbora Holická - active in European competition since 2013. She was part of the Czech Women Talent rallying contest, using a Citroen DS3, and appears to have been the runner-up in the competition. Her first rally was actually in Germany - the Thüringen Rally, in which she drove a Dacia Logan to 48th place, eighth in class. After that, she concentrated on the Czech Sprintrally championship, usually in the Dacia, although she did use a Skoda Fabia in one event. She won class 10 twice, at the Ferrodo Matrix Rally Kostelec nad Orlicí and the Rally Jeseníky. Her best overall result was 44th, in the Rally Slušovice, a round of the main Czech championship. In 2014, she carried on rallying the Citroen in Czech rallies, including the Barum and Hustopeče events. Her best result was 35th, in the Rallye Český Krumlov. Another season in the Czech championship in 2015, driving the DS3, gave her a best finish of 44th, in the Šumava Klatovy Rally. She was the 2016 Czech ladies' champion, although gearbox troubles affected her DS3 mid-season. Her best overall finish was 57th, in the Krumlov Rally. She retained her Czech Ladies' title in 2017, in the DS3. Her best event was the Bohemia Rally, in which she was 45th and first in class. In 2018, she lost her Czech Ladies' crown to Sandra Pokorna. She drove the DS3 in three events, with a best finish of 63rd in the Inveit Rally Pacejov. In 2019, she continued with the DS3 and was a stronger driver, usually inside the top 50. Her best finish was 41st in the Rally Bohemia.


Olga Lounová - active in Czech rallies since 2011. From then until 2013, her car was a Renault Clio. She mainly competes in sprint rallies, but has also attempted some major events, including the Barum Czech Rally Zlín, in which she was 64th, in 2012. This was her best result of that season. In 2013, her best finish was 31st in the Rally Bohemia, another European event. This was a highlight in a year plagued by mechanical issues. In 2014, exchanged the Clio for a Mitsubishi Lancer Evo IX, and drove in Czech and Slovak rallies, mostly rallysprints. Her best result was 32nd, in the Pražský Rallysprint. In 2015, she rallied this car, and a Subaru Impreza, in Czech events. She won her class in the Rally Bohemia, and was 42nd overall. Her 2016 car was the Lancer, which she drove in rallysprints, with varying results. The most impressive of these was an eleventh place in a round of the GPD Rallydrive series. In 2017, she rallied the Lancer and a Renault Clio, but did not finish any of her events. The Barum Czech Rally Zlín was her only major event of 2018 and she was 76th in the Lancer. Away from the rally stages, she is better known as a singer and musical theatre performer in the Czech Republic.


Michaela Maňovská – active since 2001 in the Czech championship, although she has been involved with rallying since the late 1980s. In 2002, she mostly took part in the Czech Sprintrally championship, usually in a VW Polo, although she did also rally in Slovakia and Spain. In 2003 and 2004, she used the Civic and a Skoda Fabia, driving in the Sprintrally championship, and some bigger events. Both of those seasons, she took part in the Barum Rally Zlín, with a best finish of 62nd in 2005, in the Civic. A break from competition followed, but she returned in 2011, driving a Ford Fiesta in the Czech Rallye Cup. The following year, she acquired a Mitsubishi Lancer Evo VI, in which she achieved her first top-ten finishes. The best of these was a ninth place in the Rallye Svetlá nad Sázavou. In 2013, she managed another ninth place, in the Rallye České Středoří, but her season was affected by a lack of finances. After this, she concentrated on drifting, and historic rallies, in a number of cars.

Sandra Pokorna - 2019 Czech ladies’ rally champion. She has been active since 2011, on and off, mostly in a series of Subaru Imprezas, including a very early GT model. It was in 2016 that she began to compete more regularly, in a Group N Impreza STi. In her first full year, she was eleventh in the Most Rally and then ninth in the 2017 Rally Horovice, her next event. Her best result in her Coupe des Dames-winning year was a 29th place overall in Rally Bohemia, fourth in class. She was sixth overall in her championship class.

Pávlina Tydlačková - Czech driver who has been active since 2011. She initially got into motorsport through her husband. Her first car was an unreliable Suzuki Swift, and she only finished three of her seven rallies. One was in a Skoda Fabia; the Uherský Brod Rally Show. She was 33rd. In 2012, she mainly used this car in the Czech Sprintrally Championship, although the Ignis also came out for some action. She was third in Class Seven, with a best overall finish of 70th, in the Rally Vrchovina. In 2013, she moved back to the Ignis, which was now more trustworthy. Her best result was 37th in the Valašská Rally, and winning class seven. She was seventh overall in the Class Seven Sprintrally championship. She also took part in the Czech Women Talent rallying contest, in a Citroen DS3, but was not one of the winners, despite winning one of the challenges. In 2014, she drove a Skoda Fabia in rallysprints in the Czech Republic. Despite a shaky start to her season, with two retirements, she won her class in the Czech Sprintrally championship. Her best finish was 58th, in the Barum Rally and the Rally Vyškov. In 2015, she won her class in the Czech Rallysprint series, driving the Fabia. She won her class three times, and had a best overall finish of 51st, in the Rally Vyškov. For stage rallies in 2016, she continued to drive the Fabia, scoring four class wins in Czech sprint rallies, and winning the national Class 10 title. She also entered some of the GPD Rallydrive sprint series in a Subaru Impreza, and had a best finish of twelfth. Her car for 2017 was a Renault Clio, which was not completely reliable. She was third in the Czech ladies' championship and did best in the Orava Rallyshow event in Slovakia, where she was 34th. In 2018, she mostly rallied the Clio, with a best finish of 54th (third in class) in the Sumava Klatovy Rally. She also drove an Alfa Romeo 147 in the Hustopece Rally. The Clio was prone to driveshaft problems in 2019, but she managed to finish three rallies in it. The best of these was the Hustopece event, where she was 48th.

Eva Vykydalová - has rallied extensively in the Czech Republic, and occasionally elsewhere, since 2003. She usually competes in sprint rallies. Her first car was a Honda Civic, which she used between 2003 and 2005, when she upgraded it to a Renault Clio. This car gave her her first top twenty finish, twelfth in the 2005 Rally of Bratislava. In 2007, she managed two more top-twenty positions, 16th in the Rally Hořovice and 18th in the Rally Kralovice. In 2008, she scored her first top ten: sixth in the Erzetka Lážovice. In more recent years, her finishes have been in the lower half of midfield, still in the Clio. In 2012, she did her first rally raid, the Dubai Desert Challenge, and in 2013, attempted to enter the Silk Way Rally.