Women in One-Make Series: outside Europe 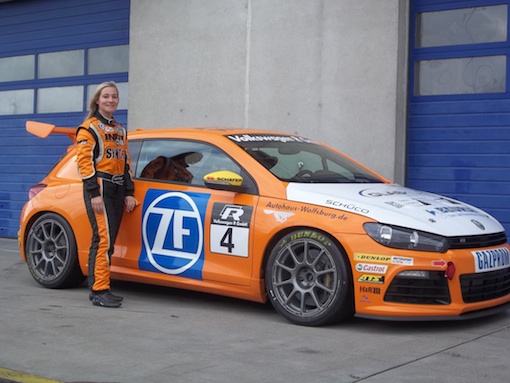 Robyn Kruger with her VW Scirocco

Female drivers are now found in one-make series for any number of different cars, around the world. South America has quite a large number, and one-make series in Asia and India are on the increase, so this post will expand in future. Drivers from outside Europe are also moving over to compete there. Reema Juffali now has her own profile.

Andrea Bate - has raced a VW in South Africa since 2009. She competed locally in the Western Cape GTi Challenge, and was fifth overall, driving a VW Golf. In 2010 and 2011, she raced the car in the Goldwagen Challenge, picking up several class wins. She also had her debut in the South African Production Car series, and was second in class. This led to her being invited to the Scirocco-R Women In Motorsport shootout in Germany, and the FIA’s Young Driver Excellence Academy. She earned a spot in the Academy for 2012. In 2013, she started racing in the VW Engen Cup in South Africa, driving a Polo this time. Her results are proving hard to find, and she may have only done a part-season. She raced in the Engen Cup again in 2014, and was seventh overall. She also made a guest appearance in the Shelby CanAm series, driving in the African 3 Hour. She and her team-mates were fifth overall. In 2015, she did some club-level racing in the Midas Sport Clubmans Championship. Her 2016 season was a write-off, after she was seriously injured in a motorcycle accident at the end of 2015. After that, she decided to retire.

Theresa Condict - SCCA racer who began her career in autocross, driving a Mitsubishi Lancer. She won a national championship in 2008, having already won various Ladies’ titles. In 2009, she was part of the Volkswagen Jetta TDI Championship, having been selected from a large pool of aspiring drivers. She was 22nd in the championship, with a best finish of 15th, in New Jersey. After that, she returned to SCCA competition in a Honda, which she prepares herself, with her father.

Elna Croeser – normally races a VW Golf or Polo in South Africa. She has been involved in one-make series for Volkswagens for at least five years. She won her class in the Goldwagen Challenge in 2008, and has challenged for race wins in the Golf since, on many occasions. Previously, she raced single-seaters in Formula GTi. She took part in the African 6 Hours in 2014, not in a VW for once. Her car was a Shelby Can-Am, and she and her two team-mates were fourth. For the rest of the year, she raced a Polo in the Comsol VW Challenge. She continued to race the Polo in 2015. At the end of the year, she took part in the African 9 Hour endurance race. She returned to the series in 2019 and scored some class podiums.

Robyn Kruger (Kriel) - South African driver who usually races in Volkswagen one-make series. She began karting at five, and moved into circuit racing at fifteen, in the Super Hatch series. She won her class championship in the category in 2006 and 2007. The following year, she moved into the Engen Volkswagen Cup, and was fifteenth overall. In 2009, driving a Polo, she improved her finishing position to tenth, then ninth in 2011. In 2012, she was eleventh again, but achieved her first podium position, at Zwartkops. In 2013, her career went international. She travelled to Buddh in India for a guest appearance in the VW Polo R Cup, in which she was second. She was also selected for the FIA Women in Motorsport Commission’s VW Scirocco-R Shootout, and got to the final stage, finishing fourth overall. Her brother, Jeffrey Kruger, also races, and they sometimes compete directly against each other. In 2014, she raced less than previously, taking part in club Superhatch racing in the Polo. She scored at least one second place. In 2018, she was racing a Lotus 7 in historic events, but she still took part in the bigger endurance races in the Polo, which continued in 2019. She and Stiaan Kriel won their class in the Phakisa 200 in 2018.

Charisse van der Merwe - races a Volkswagen Polo in South Africa. She competes in a one-make series for that car, the Motormart VW Challenge. 2019 appears to be her first season in the championship and possibly her first year of racing. She was 16th overall and sixth in Class B. The B class is strongly contested and she is referred to as one of its leading entrants. Her best result looks to have been a tenth place at Red Star Raceway.

Loni Unser - races a Mazda Miata (MX-5) in the USA. Her career began in 2017, when she was 19 and a college student. Since 2018, she has raced in the Global MX-5 Cup in the States. In 2019, she had a best finish of seventh in this championship, achieved at Circuit of the Americas and Barber. She is a member of the Sick Sideways team and is sometimes part of their saloon endurance squad for events such as the ChampCar (formerly ChumpCar) enduro. She is a fourth-generation member of the famous Unser family, the daughter of Johnny Unser.