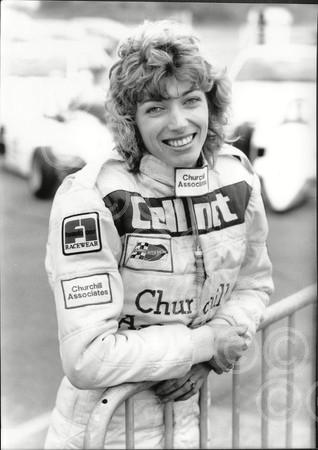 Heather is a Scottish racer, active in the 1980s and 1990s. She was a race winner in different driving disciplines, and enjoyed modest success on the track.

Her career began in earnest when she won a season’s Kit Car racing in a driving competition, having been entered by her father. This was in 1984, when she was 19, and followed some sprinting and hillclimbing in a Formula Ford. Her Kit Car season, in 1985, resulted in a class second overall.

In 1987, she went back to single-seaters, and raced in Formula First, the entry-level formula of the time. The 1987 season was not the easiest, with a crash putting her out of the first round at Brands Hatch. However, her second year as a Formula First driver saw her make progress, with a best finish of fifth, and tenth in the championship. Her time in this series was marred by a pitlane accident involving another Formula First car, at Brands Hatch. The car was driven by a novice, whom Heather was actually instructing at the time. She broke both of her legs and had to take time out from racing.

In 1989, she had another go at single-seaters, in Formula Forward. This resulted in another best finish of fifth, and eighth in the championship.

During this time, she was also racing a Suzuki Swift in saloon races, including the Willhire 24 Hours, held at Snetterton, in 1988 and 1989. She won her class in 1988.

She was a race-winner in the Ford Fiesta championship of 1990, finishing third in the points. Her win came at Oulton Park. The same year, she mastered small saloons as well as much bigger machinery, winning a British truck racing championship. Her British truck record included three wins and three seconds, from six races. She raced in some European Truck championship rounds, too, and was fourth in one race at Paul Ricard.

1991 was again focused around saloons, and she raced a Ford Sierra Cosworth in the Production Saloon championship. Although she could not quite repeat her heroics of the previous year, she had a best finish of second, and was sixth overall in the championship.

In a surprise switch back to single-seater racing, she contested eight rounds of the Japanese F3 championship, in 1992. She was part of the She’s Racing team. This was not an easy season for Heather, who did not manage to score any points.

1993’s activities are not completely clear, but it seems that she did some more truck racing, in the British Chamionship. It is clear from pictures that she also took part in one European championship round, at Le Castellet, driving a Chris Hodge TRD. The results are not forthcoming.

Back in the Asia-Pacific area in 1994, she raced a Toyota Celica with Gwenda Searle, at the James Hardie 12 Hour race in Australia. They did not finish.

Heather’s last significant motorsport activity was winning two AC Cobra races in the UK in 1995, racing as Heather McAlpine, following her marriage.  The same year, she was one of the instructors for the Daewoo Lady Driver competition.

Although she claimed in 2002 that she had not retired, she has not been seen competitively on the circuits since then. She has, however, been on them; in 1996, she started an all-female track day team, driving a SEAT Ibiza. Among her “fellow” drivers was Barbara Armstrong.