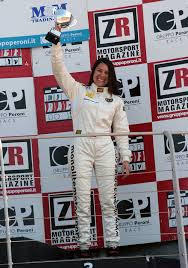 One-make racing series are popular in South America. Due in part to initiatives such as Formula Hyundai Femenina (Argentina) and the Brazilian Fiesta Championship, quite a lot of women have competed in them in the last 20 years. Marisa Panagopulo now has her own post.

Lorena Blanco – best known for racing in Fiat one-make championships in Argentina. She started off in the Fiat Linea Cup in 2010, entering the last few rounds, following some previous historic racing. She had another part-season in 2011, and made it into the top twenty on four occasions. The Linea series crossed over to using the Punto Abarth in 2012, and she improved her best finish to fifteenth. That year, she was the team-mate of a returning Marisa Panagopulo. A full season in the Punto in 2013 gave her two fifteenth places, and 24th overall. A final part-season in the Punto, in 2014, saw her finish fourteenth, three times, and end up in 32nd place overall. In 2015, she did another part-season in the Punto series, and was 31st in the championship. Her best finish was 17th, at La Pampa. This arrangement continued in 2016, and her best finish improved to fourteenth, at Trelew. She was 36th overall.

Carolina Canepa - Uruguayan driver who races in saloons and trucks. She started out in 2013 in the Chevrolet Sonic Cup in Uruguay, a one-make series. She was eleventh in her first season, with a best finish of sixth. A women-only version of the championship ran in 2014, and Carolina was third, behind Carolina Larratea who finished one place above her in the 2013 series. She went back to the main Sonic Cup draw in 2015, and won her first race, at Rivera, towards the end of the season. She was sixth overall. Her 2016 Sonic Cup season was similar, with one win and a sixth spot on the leaderboard. This was her last season in the championship before transferring to Formula Truck in 2017. She was part of the “Woman’s Racing Team” with Maria Cristina Rosito. Her truck was a Volvo, and she steadily improved over the season, with two sixth places at Londrina her best results. She was sixth in the championship. After a year off, she raced a Chevrolet Sonic again in 2019, in Class 2 of the Uruguayan touring car championship.

Juliana Carreira - began racing in 1998, in a Vauxhall Corsa, participating in regional one-make races. She was involved in the women’s Corsa championship in 1999, and the later Fiesta version in 2001. In 1999, she also took part in four Corsa Metrocar (a mixed Corsa one-make series) races, finishing in the top five in three of them. She also raced in a Clio Cup in Brazil at some point. She is from a racing family, and drove in the 2003 Mil Milhas Brasileira with her brother, Luiz, and Denis de Freitas and Jose Venezian. They were 15th, in an Audi RS2G. Later, she also did some Stock Car racing, in 2006. She works in fashion and the media in Brazil.

Maria José Castro - races in the Toyota Yaris Cup in Costa Rica, where she is from. Unusually, she races alongside her father, Marco, who shares her car. At the time of writing, she has not yet got into the points, although she only has half of the chances of most other drivers, due to her car-sharing. The Yaris Cup is her first experience of racing in cars, although she has done some karting in the past.

Francisca Cortés – raced in the Chilean Trofeo Nissan Sunny in 1990. She was the first female driver to take part in the series, and one of Chile’s first female racing drivers. Although she never managed a podium position, she did achieve some top-ten finishes, and one pole position, at Antofagasta. This was overshadowed by the death of another driver during the race itself. The final championship standings for this series are not forthcoming. Francisca does not appear to have raced since then.

Carolina Eiras – did two seasons in the Fiat Linea Cup in Argentina, in 2010 and 2011. Her 2010 season is chiefly remembered for a spectacular crash into a lake at the Resistencia circuit, after which she was helped to safety by spectators. Her best finish was thirteenth, at Alta Gracia. In 2011, she did not complete as many races, managing three 19th places out of four starts. She is a former Olympic skier.

Julieta (Juli) Fernández - one of the front-runners in the Argentine Mini Challenge in 2013. She was third overall, just missing out on an actual win, but with two podium finishes and two podium positions. She did manage to win some at least one training race. This was her first experience of saloon car racing, although she did do some GT racing in 2009, aged 18. She drove a new Crespi prototype in the GT 2000 series for Oyikil Motorsport, although she did not finish her race. In 2010, she was linked to a drive in Formula 4, but she did not have the budget to compete. Previously, she was active in karting in Argentina for many years, and may have also competed in Formula 1100 briefly. In 2015, she took part in the Top Race championship, driving a Chevrolet Cruze. She almost reached the top ten a couple of times, finishing eleventh at Rosario and Olivarria. She was 25th overall. In 2017, she made a guest appearance in the Argentine Turismo Pista series, driving a Fiat Uno. She entered the Buenos Aires round but did not finish.

Sabrina Formal - Costa Rican driver who races in the Toyota Yaris Cup in her home country. In May, her best finish was ninth overall. At 20, 2017 was her first experience of senior motorsport, although she did do some national-level karting when she was much younger. Her brother is also a racing driver.

Michelle de Jesus - Brazilian driver who has been competing since 2006. She started out in her regional championship in São Paulo. By 2010, she was second overall in the championship, a best-ever finish for a female driver. The following year, she moved into national-level competition, driving in a few rounds of the Brazilian Petrobras de Marcas Cup (in a Toyota Corolla) and the Mercedes Benz Grand Challenge (in a C250 CGI). As she only did a couple of races, she did not do enough to make her mark on the final standings. She returned to the Grand Challenge in 2012, this time mounting a full campaign. Her car was the same, run by the Pink Energy team. She was ninth overall, with a best finish of fifth , at Rio de Janeiro. For 2013, she changed marques, moving to the Mitsubishi Lancer Cup. She achieved her first podium, at third at Velo Città, on her way to another ninth overall finish. Early in the season, she also made her first trip to Europe, to participate in one round of the Euro Racecar series, at Dijon. She was thirteenth, in a Chevrolet Camaro. In 2014, she stayed in South America, competing in truck racing, and the Marcas e Pilotos Cup. Her car in the Cup was a Corsa, and she does not appear to have completed a full season. She was 25th in Formula Truck, after a part-season, and had a best result of eighth, at Brasilia. In 2015, she was registered for Formula Truck, but does not appear to have actually raced.

Carolina Larratea – Uruguayan driver from a motorsport family, who has been racing in the Chevrolet Sonic Cup since 2013. She was tenth in 2013, with a best finish of second, at El Pinar. In 2014, she scored her first outright win in the Cup, in the last round. This race was doubly notable in that two female drivers started on pole and second place. Carolina won the Sonic Ladies’ Cup. She continued to race a Chevrolet Sonic in 2015. Her season began very well, with a pair of wins at El Pinar, and she was second in the championship. She made the podium again in 2016, in third place. In 2019, she made a triumphant return to the circuits and won the Auvo-class Super Sonic championship, another one-make Sonic series. She won five races.

Graziela (Zizi) Paioli - Brazilian driver who has raced in two different one-make championships. In 2007 and 2008, she had part-seasons in the Brazilian Clio Cup. In 2008, she finished tenth at Santa Cruz, her first Clio Cup top ten, and was 21st in the championship. After some time out, she returned to competition in 2011, in the Mercedes Benz Grand Challenge. Her car was a C250 run by her family team, Paioli Racing, as always. Her best finish was fourth, at Santa Cruz, and she also finished in the top ten on five more occasions. She was eleventh overall. Her father, Marco Paioli, is also a racer, who runs the team with Graziela’s mother. Graziela herself became a mother in early 2013, explaining her absence from the track.

Paola Traverso - seems to have begun racing in 1996, in Formula Hyundai Femenina. She was one of the leading drivers, and won races. In 1997, she was a race-winner again in the Copa Damas, an all-female one-make series which used the Vauxhall Corsa. She may also have raced in a mixed Corsa one-make series, and won races there. She competed in all three seasons of the Copa Damas, and was a front-runner in all three.