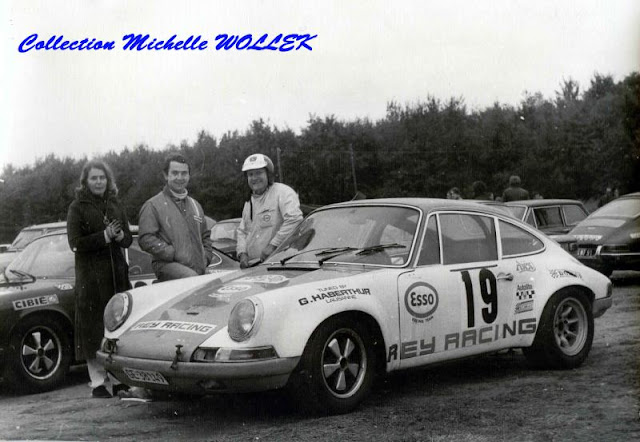 Corinne, left, with Bob Wollek and Jacques Rey in 1970

Corinne Koppenhague was a versatile French racer, probably best known for coming 11th at Le Mans in a Porsche Carrera in 1975, as Corinne Tarnaud. Her team-mates were Yvette Fontaine and Anny-Charlotte Verney.

Her motorsport journey began in 1968 or 1969, depending upon which source one trusts. Her cousin, Marie-Claire Cibié (Beaulieu), had been involved in events like the Tour de France, and Corinne had become friends with some of the young guns of French motor racing, including Jacques Laffite and Jean-Pierre Jabouille. Her first practical experience of a motor race was when she helped out in the pits at the Reims 12 Hours, working for Sylvain Garant. This spurred her on to start her own competition career. In 1969, she co-drove for Marie-Pierre Palayer in the Critérium des Cévennes, in a BMW. They won the Coupe des Dames.

In the 1970 Critérium des Cévennes, she navigated for Bob Wollek, and helped him to second place in his Porsche 911. She shared a similar car with Thierry Sabine for the AGACI 300 at Montlhéry, but the result has been lost. Her performance on the Critérium des Cévennes was enough to win her the French Coupe des Dames for co-drivers. She also drove herself in some French rallies, in the Porsche, at Chataigne and Poitou.

By 1971, she had moved more fully into the driving seat. Her biggest event of the year was the Tour de France, which she had entered in a Porsche 911. Her co-driver was Christine Rouff, later a key member of Team Aseptogyl, and they had a third team member in the shape of a tortoise, which slept in the Porsche’s glove box and was fed by the mechanics. Corinne and her team were 27th out of 49 finishers, and ninth in the 2000cc GT class. Navigation had not been completely left behind: she sat beside Francine Warein in a Simca for the Morocco Rally. At some point, she also co-drove for Christine Dacremont in an Opel Kadett, perhaps this year.
In 1972, she stepped away from Porsches temporarily, and drove an Alfa Romeo 2000 GT. She did not finish this year’s Tour de France due to engine failure, but was 32nd in the Ronde Cévenole. She was still active in French rallies in the Porsche, and entered that year’s Paris-St. Raphaël Rally.

She did not compete in 1973. It was this year that she married, and thereafter, raced under the name Tarnaud or Koppenhague-Tarnaud. She was eighth in the 1974 Paris-St. Raphaël, driving an Alfa Romeo 2000. Another run in the Ronde Cévenole led to an 18th place, out of 33 drivers, and she was 27th in the Tour de France, in an Alfa Romeo again. Her team-mate for the Tour was a Madame Hoube, who had co-driven for her in rallies previously.

1975 was the year of her Le Mans adventure. She was part of an all-female team, led by Anny-Charlotte Verney, whose Porsche 911 Carrera RS they drove. Anny-Charlotte was another regular on the French racing and rally scene. Yvette Fontaine, the third team member, was also multi-talented, and from Belgium. They were the better of the two all-female teams that year, and were second in the Series GT class. She teamed up with Christine Beckers at Zolder, driving a Triumph Dolomite, and even made the trip out to Sweden, to race a Volvo in a one-make cup there. She was all set to drive in another Tour de France, too, but the death of her intended team-mate, “Charlotte”, in a road traffic accident, meant that she dropped out.
She attempted to qualify for Le Mans again in 1976, driving a TOJ SC204 with Jacky Haran and Jacques Marquet. They were not successful.

She was certainly still involved in stage rallying in 1976, and was part of one of the later incarnations of Team Aseptogyl. She drove a little Autobianchi A110 in the Monte Carlo Rally for the team, although she does not appear to have finished. She may well have rallied elsewhere in the pink A110, as she appears in Aseptogyl publicity material for that season. She entered the Mont Blanc Rally that year, but crashed out. As well as the Aseptogyl car, she also drove an Alpine-Renault 1800.

1977 was mostly spent away from motorsport, “resting”, as Corinne claimed in a contemporary interview in Echappement. In 1978, she raced an Alfasud in a European one-make series, finishing third at Albi, and setting a lap record in the process.

After 1978, she became more and more involved in rally raids, first on motorcycles, then on four wheels. In 1979, she entered the first Paris-Dakar Rally, on a motorbike, one of seven female riders making history that year. She rode a Suzuki, but did not finish. The following year, she moved into the car class, in a Willys Jeep. This led to another non-finish. She attempted the Dakar another eight times, once more on a motorcycle in 1985. Her last try was in 1988, when she drove a Land Rover. Her other vehicles included a Range Rover, a Jeep Hotchkiss in 1981 and a Toyota pickup in 1982.

After her retirement from active motorsport in 1988, she has remained involved in competitive sport. She still rides motorcycles recreationally, and skis competitively, despite her advancing age.